Pope Francis will name Charles de Foucauld a saint. Who was he? 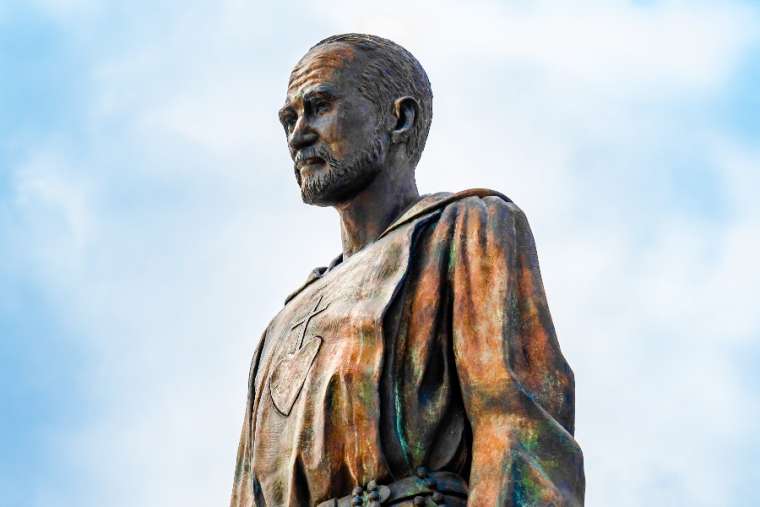 Pope Francis will name Charles de Foucauld a saint. Who was he?

The Vatican announced Wednesday that Pope Francis has advanced the sainthood causes of 14 men and women, including Bl. Charles de Foucauld, a French missionary killed in Algeria in 1916.

De Foucauld, also known as Brother Charles of Jesus, was a soldier, explorer, Catholic revert, priest, hermit, and religious brother, who served among the Tuareg people in the Sahara desert in Algeria.

He was assassinated by a band of men at his hermitage in the Sahara on Dec. 1, 1916.

De Foucauld was born in Strasbourg in 1858. He was raised by his wealthy and aristocratic grandfather after being orphaned at the age of six.

He joined the French military, following in the footsteps of his grandfather. Having already lost his faith, as a young man he lived a life of indulgence and was known to have an immature sense of humor.

De Foucauld resigned from the military at age 23, and set off on a dangerous exploration of Morocco. Contact with strong Muslim believers there challenged him, and he began to repeat to himself: “My God, if you exist, let me come to know you.”

He returned to France and, with the guidance of a priest, came back to his Catholic faith in 1886, at the age of 28.

The following saying is attributed to him: “As soon as I believed in God, I understood that I could not do otherwise than to live for him alone.”

De Foucauld realized a vocation to “follow Jesus in his life at Nazareth” during a pilgrimage to the Holy Land. He was a Trappist monk in France and Syria for seven years. He also lived as a hermit for a period near a convent of Poor Clares in Nazareth.

He was ordained a priest in 1901 at age 43 and left for northern Africa to serve among the Tuareg people, a nomadic ethnic group, saying he wanted to live among “the furthest removed, the most abandoned.”

In the Sahara he welcomed anyone who passed by, whether Christian, Muslim, Jewish, or pagan.

He was deeply respectful of the faiths and cultures he lived among. During his 13 years in the Saraha he learned about Tuareg culture and language, compiling a Tuareg-French dictionary, and being a “brother” to the people.

The priest said he wanted to “shout the Gospel with his life” and to conduct his life so that people would ask, “if such is the servant, what must the Master be like?”

De Foucauld was the inspiration for the founding of several lay associations, religious communities, and secular institutes of laity and priests, known collectively as “the spiritual family of Charles de Foucauld.”

At his beatification in 2005, Pope Benedict XVI said as a priest, de Foucauld “put the Eucharist and the Gospel at the center of his life.”

“He discovered that Jesus — who came to unite Himself to us in our humanity — invites us to that universal brotherhood which he later experienced in the Sahara, and to that love of which Christ set us the example,” he said.

After meeting with Cardinal Angelo Becciu, prefect of the congregation for saints’ causes May 26, the pope approved a second miracle attributed to de Foucauld’s intercession, paving the way for his canonization.

On May 27, Pope Francis also advanced the cause of Bl. César de Bus, a French priest who lived from 1544 to 1607, and founded two religious congregations.

He also advanced the cause of Italian Bl. Maria Domenica Mantovani, co-founder and first general superior of the Institute of the Little Sisters of the Holy Family, who died in 1934.

The pope also approved the first miracle attributed to the intercession of Venerable Michael McGivney, a 19th-century American priest who founded the Knights of Columbus. He may now be beatified.

French laywoman Venerable Pauline-Marie Jaricot, who lived from 1799 to 1862 in Lyon, may also now be beatified.

She founded the Living Rosary Association and the Society of the Propagation of the Faith — which later became the first of the four pontifical mission societies.

Jaricot, a member of the lay Dominicans, was devoted to promoting support of the Church’s missionary efforts around the world.

She was the youngest of seven children. After losing her mother when she was 17, Jaricot took a vow of perpetual virginity and devoted herself to prayer. For many years, St. John Vianney was her spiritual director.

She was declared Venerable in 1963 by St. Pope John XXIII.

In 2013, Cardinal Fernando Filoni, then head of the Congregation for the Evangelization of Peoples, said “Jaricot’s heroic virtues do not consist in a series of miraculous events, but in that fruitful fidelity to Christ, to whom she devoted herself both in good times and in those difficult and tormented moments, as well as in the long-term vision of a commitment to evangelization, so that all people get to know Christ and of the merciful love of God.”

Pope Francis also confirmed May 27 the martyrdom of six Cistercians, the Servant of God Simeon Cardon and his five companions, who were killed in 1799 in Casamari, Italy.

He also confirmed the martyrdom of Cosma Spessotto, a priest and Franciscan from northern Italy who was killed in El Salvador in 1980.

Servant of God Bishop Melchior de Marion Bresillac, who was apostolic vicar to Sierra Leone and the founder of the Society of Africa Missions, was also advanced on the path to sainthood. A Frenchman, he died in 1859 in the West African country.