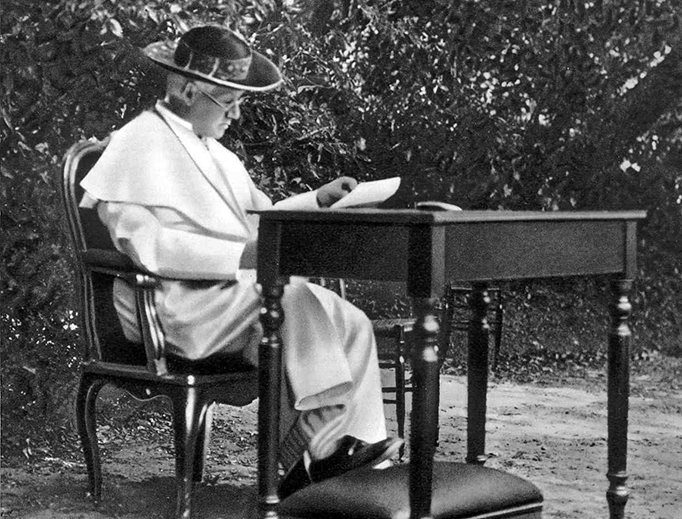 There have been 12 popes named Pius; the first (Pope Saint Pius I) in the second century; the latest (Pope Pius XII) reigning from 1939 to 1958. Popes named Pius have seen the Church through tumultuous times. Enea (named after Vergil’s Aeneas) Silvio Bartolomeo Piccolomini, who took the name Pius II in 1458, tried to raise a crusade against the Ottoman Empire, which was invading Eastern Europe, but died on his way in Ancona on the coast of the Adriatic Sea in1464. Pope Pius IV (1559-1565) should be forgiven any nepotism that inspired his naming one of his nephews a cardinal, for St. Charles Borromeo, the Archbishop of Milan, became of the greatest reformers of the Counter-Reformation era. He implemented the programs of the Council of Trent as a model for other bishops to emulate. AfterSt. Pope Pius Vwas canonized in 1712, the next pope named Pius to be canonized was Pope Pius X.

“Restoring All Things in Christ”

Pope St. Pius X, who reigned a little more than 11 years from 1903 to 1914, was a reforming pontiff, taking the mottoInstaurare Omnia in Christo, or “to restore all things in Christ” to guide his papacy. Like Pope St. Pius V, he lived simply, stating that he had been born poor, had lived poor and wanted to die poor. He shared Pius V’s devotion to the Blessed Virgin Mary, writing an encyclical on the 50th anniversary of the proclamation of the doctrine of the Immaculate Conception. Also like Pius V—and his immediate predecessor Pope Leo XIII—he promoted the method and works of St. Thomas Aquinas.

Pius X was born Giuseppe Melchiorre Sarto on June 2, 1835, in what was then the Kingdom of Lombardy. As a parish priest and then bishop he had more pastoral experience than previous popes, but he also taught theology in seminary even though he never earned a doctorate. When he succeeded Pope Leo XIII, he saw the great danger to the Catholic faith as Modernism, which he considered the “synthesis of all heresies.” Setting out a long list of Modernist propositions which he said Catholic could not agree, he also wrote an encyclical descrying Modernism,Pascendi dominici gregis(“Feeding the Lord’s Flock”), pointing out that the agnosticism of the Modernists on matters of Church doctrine, the inspiration of the Scriptures, and the Sacraments could lead to atheism. Pius X demanded loyalty oaths against Modernism from all Catholic priests.

Some scholars and theologians, like Alfred Loisy and George Tyrell, were removed from teaching positions, forbidden to publish their works, and even excommunicated. Some faithful but innovative scholars and theologians, like Father Marie-Joseph Lagrange, OP, founder of the Ecole Biblique in Jerusalem, were also suspected and hampered in their efforts. During the reign of Pope Pius XII, the Ecole Biblique would publishThe Jerusalem Bibletranslated not from the Latin Vulgate but from Greek and Hebrew texts; during Pope St. Pius X’s campaign against Modernism, such a volume might not have been possible. Marvin R. O’Connell provides an excellent overview of the period inCritics on Trial: An Introduction to the Catholic Modernist Crisis(Washington DC: The Catholic University of America Press, 1995).

More positively, Pius X encouraged frequent reception of Holy Communion and earlier First Communion. First Holy Communion had been delayed until the teenaged years, but he moved it to the age of reason, about seven years old, when a child could accept the doctrine of the Real Presence of Jesus, Body, Blood, Soul and Divinity in the Host. He is the “Pope of the Blessed Sacrament.”

Other liturgical reforms included the restoration of Gregorian chant in the Mass instead of classical settings by Beethoven, Mozart, Haydn or Cherubini. His motu proprioTra le sollecitudini, written in Italian, also encouraged Renaissance polyphony, leading to the revival of works by Victoria, Palestrina, and others from the 16th century.

Pius X also began the process of revising and regularizing the Code of Canon Law for the universal Church and, because of his pastoral experience, required the teaching of catechism classes in every parish in the world, establishing the Confraternity of Christian Doctrine. Pope Pius X described the duties of a catechist in his 1905 encyclical,Acerbo Nimis(“At this very troubled and difficult time”):

The task of the catechist is to take up one or other of the truths of faith or of Christian morality and then explain it in all its parts; and since amendment of life is the chief aim of his instruction, the catechist must needs make a comparison between what God commands us to do and what is our actual conduct. After this, he will use examples appropriately taken from the Holy Scriptures, Church history, and the lives of the saints – thus moving his hearers and clearly pointing out to them how they are to regulate their own conduct. He should, in conclusion, earnestly exhort all present to dread and avoid vice and to practice virtue.

As a pastor, Pius X knew this material had to be taught so that the students, both young and old, would understand it, but he also required that the catechesis be comprehensive and complete:

The catechetical instruction shall be based on theCatechism of the Council of Trent; and the matter is to be divided in such a way that in the space of four or five years, treatment will be given to the Apostles’ Creed, the Sacraments, the Ten Commandments, the Lord’s Prayer and the Precepts of the Church.

As pastor in Rome, Pope Pius X preached a homily every Sunday at St. Peter’s and gave catechetical instructions himself.

Church-State Relations around the World

Pope Pius X dealt with some difficult church-state relationships in Europe, particularly in France, where conflict led to the official secularization of French society, calledlaicite. France had long been known as the Eldest Daughter of the Church and after the French Revolution, strong links between the government and Church, especially in education and health care, had been re-established. The official 1905 separation of Church and State ended that cooperation; Pius X condemned that action.

In the United States, he recognized the growth and stability of the Catholic hierarchy and removed it from the authority of the Congregation of Propaganda — the U.S.A. was no longer considered mission territory. On Aug. 15, 1913, Pope Pius X authorized the building of the National Shrine of the Immaculate Conception in Washington, D.C., making a donation in Italian lire to its construction.

When he died on Aug. 20, 1914, European forces were mobilizing to fight in World War I. Devotion to him grew between the two World Wars and he was beatified by Pope Pius XII on June 3, 1951, and canonized on May 29, 1954. Because Aug. 20 is the feast of St. Bernard of Clairvaux, Pope St. Pius X’s memorial is celebrated the day after hisdies natalis, the day he entered eternal life.

How can you explain to non-Catholi...