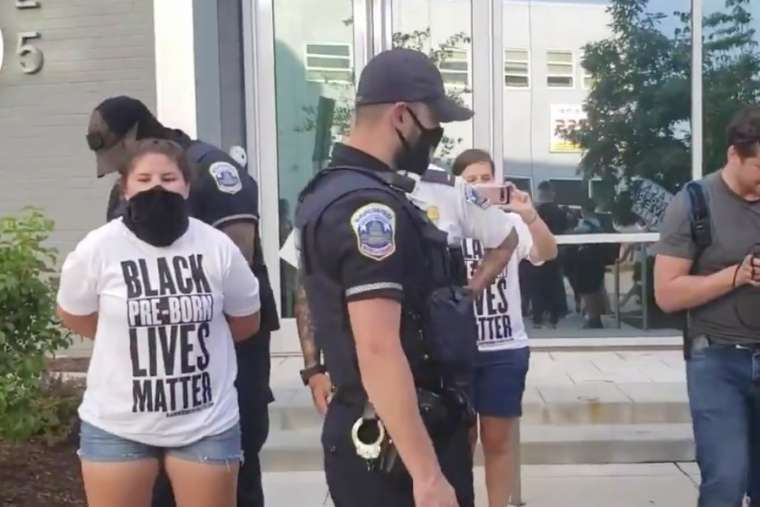 Protesters were arrested Saturday for writing a pro-life message on the sidewalk outside a Washington, D.C., Planned Parenthood clinic, but say police told them before the event they would not be stopped from writing there.

On Saturday, Students for Life of America (SFLA) published avideoshowing two members of the group—strategic partnerships advisor Warner DePriest along with a student member—being arrested by police outside the Planned Parenthood clinic in Washington’s NoMa neighborhood.

The protestors were attending a planned demonstration, co-hosted by SFLA and the Frederick Douglass Foundation, to draw attention to the abortion rate in the African-American community.

As the two protesters were writing “Pre-born Black Lives Matter” in chalk on the sidewalk, a police officer can be seen telling them “if you continue chalking, you’re going to be placed under arrest.” They continued writing, after which two other officers approached the two and placed them in handcuffs.

According to SFLA, the arrests came after assurances were given by Metropolitan Police that sidewalk painting would not be stopped during a permitted protest.

SFLA president Kristen Hawkins told CNA Aug. 3 that the group had applied for and received from police a permit to hold an assembly outside the clinic, and said the group was told directly that protestors “would not be prevented from painting” by police.

Days before the demonstration, police officials told Tina Whittington, executive vice president of SFLA, that “a ‘pandora’s box’ had been opened regarding painting,” and that the group would not be stopped from painting during their demonstration, but should use a paint that would wash away quickly, Hawkins said.

Despite those assurances, when members of the group arrived outside the Planned Parenthood clinic on Aug. 1, they were told by police they could use neither paint nor chalk to write a message, Hawkins said.

One of the two members arrested, DePriest, has written other messages in chalk at that location “20 times or more without arrest or threat of arrest,” Hawkins said.

A spokesperson for the District Metropolitan Police Department told CNA on Monday that the two protesters were given a citation and then released. The spokesperson noted that “to our knowledge” the Students for Life activists had not obtained permits to write messages on the streets and sidewalks outside the clinic.

In reference to the arrests, Metro police cited a city statute that makes it “unlawful” to “write, mark, draw, or paint” on public property without explicit permission from city authorities.

According to the website of the District transportation department (DDOT), sidewalks are considered public space. A spokesperson for the DDOT did not answer CNA’s inquiry by press time, as to whether a permit was needed to write a chalk message on the sidewalk, and if one had been requested and obtained by Students for Life of America.

Earlier this summer, District Mayor Muriel Bowser ordered part of 16th Street, near the White House, painted with the slogan “Black Lives Matter” during mass anti-racism protests in the city. Protesters also painted “Defund the Police” on the same street as an addition to Bowser’s message.

In a July 20 letter to Bowser, Hawkins asked for permission to paint “Black Pre-Born Lives Matter” on the street outside the Planned Parenthood clinic on Aug. 1.

Hawkins argued in her letter to the mayor that it would be unlawful “viewpoint discrimination” if the District government painted a street with a message, and allowed protesters to paint another message, while prohibiting pro-lifers from painting their own street message.

“If you open the door to free speech on the city streets to one group, you can’t shut it to others,” Hawkins wrote to Bowser.

According to its website, the D.C. police department has arrested 455 people in connection with mass protests this summer. Most (330) of the charges filed were curfew violations, while 57 involved “felony rioting” where “tumultuous and violent conduct” poses “grave danger” or commits “serious injury to persons or serious property damage.”