Protecting Grandma After the Pandemic: The Secret War on the Elderly 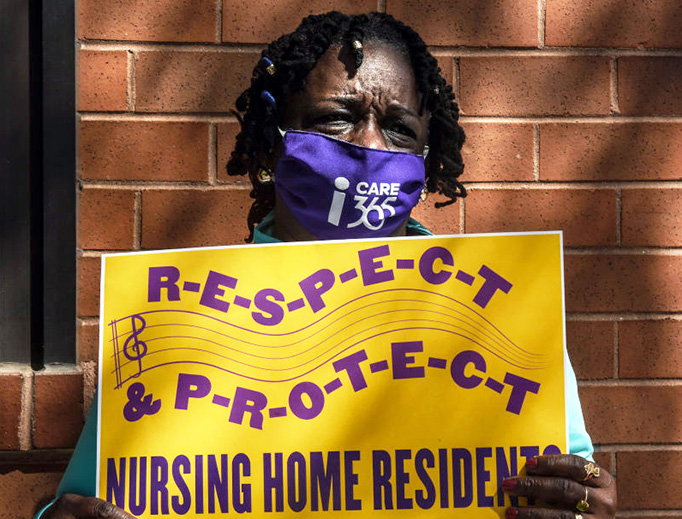 Protecting Grandma After the Pandemic: The Secret War on the Elderly

Terminal dehydration and VSED are widespread forms of euthanasia — and “intentional euthanasia, whatever its forms or motives, is murder.” (CCC 2324)

“Is this not in large measure what it means to belong to a family: to burden each other — and to find, almost miraculously, that others are willing, even happy, to carry such burdens?” —Gilbert Meilaender

“The bottom line? Feed the hungry. Give drink to the thirsty.” —Charles Rice & Theresa Farnan

Back in March — remember March? It was like 100 years ago; a thousand years ago — yes, back in March, I reposted an opinion piece from the Wall Street Journal called, “Is the Coronavirus as Deadly as They say?” It was by a couple of Stanford medical researchers, Eran Bendavid and Jay Bhattacharya, who were pushing back against the COVID-19 panic.

I’m an RN, and I suspected early on that this new, highly contagious disease would be deadly and would place a huge burden on my colleagues (and former students) at the bedside. Bendavid and Bhattacharya knew all that as well — they’re both doctors, after all, interested in preserving and saving lives, not just shilling for big business. Yet, they took a nuanced look at the issue, which is what you’d expect from scientists. “A universal quarantine may not be worth the costs it imposes on the economy, community and individual mental and physical health,” they wrote. Their point sounded reasonable to me: Could the extreme measures we were all being asked to endure (including my colleagues who were still showing up to work at the hospitals) be an unnecessary overreaction?

Anyway, to me, it was a question that seemed worth asking. Some of my friends thought otherwise. “Regardless of how you approach the stats,” one commented on my repost, “doesn’t it come down to the value of human life?” Another wrote, “Feels like a pretty inconsistent pro-life ethos to value the economy above lives.”

We’re hearing that kind of argument a lot these days — that it’s somehow barbaric, and certainly anti-life, to be weighing risks and benefits with regards to getting our country out of quarantine and back to work, back normal as much as possible.

However, it’s a hollow argument because it’s based on a false dichotomy. I’m pro-life to the core, and I affirm without reservation or qualification the innate dignity and sacred character of every human life. Every single one, without exception. Every human life, from fertilization until natural death. Yet there’s more to defending life than protecting people from a novel coronavirus. The agony of the shutdowns is that, while they might’ve helped saved lives by “flattening the curve” and impeding the infection’s spread, their continuance has had a severely detrimental impact on other dimensions of human flourishing. Suicide and domestic abuse, impoverishment and hunger, alcohol and drug abuse — they’ve all been increasing since the advent of widespread shelter-in-place orders.

But there’s a greater irony here. The national shutdown was largely designed to protect the lives of especially vulnerable populations, particularly the elderly, and it’s nice (to say the least) that our warehoused elderly are finally getting the attention they deserve. “Yes!” we’ve said as a nation. “Of course! We need to care for the grandmas and grandpas we’ve outsourced to long-term care facilities, and we’ll do whatever it takes – even shuttering the world’s economy for, well, who knows how long? Heck, we might even consider making the sacrifices necessary to have them move home with us. We need to keep them safe!”

Yet, and here’s the irony, those same seniors have been the unremitting target of hastened death for some time now — and nobody has ever made a peep! It’s called terminal dehydration, and it has long been a legal mainstay in geriatric medicine. Essentially, it’s the withholding of all nutrition and hydration — no food and water, in other words, and I’m not talking about withholding nutrients when a person’s body can’t absorb them anymore or when death is imminent. Terminal dehydration, by definition, is intended to speed along the dying process. Those with feeding tubes are especially at risk, for tube feeding is already perceived by most clinicians as “artificial” and “medically assisted.” Thus, all it takes is a doctor’s order to discontinue “extraordinary measures,” and *poof* no more food and water. Death ensues.

Those who defend the practice will tell you that foregoing food and fluids is routine at the end of life, and that those who undergo death by dehydration actually experience little discomfort. Whether you buy that or not, keep in mind that terminal dehydration is outright passive euthanasia — killing, that is, by omission — and it isn’t just visited on the dying. You’d think this was the kind of thing reserved to hospices and oncology wards, but it happens to physically healthy older adults as well — folks who simply can no longer feed themselves (usually due to dementia) and have simply lived too long according to the judgment of others. These are the same elderly — the same grandmas and grandpas in the nursing homes and assisted living facilities — that we’re attempting to shield from COVID death by wearing masks and staying home. The very same ones!

In fact, those who care for the cognitively intact elderly will even go so far as to educate them about “voluntarily stopping eating and drinking” — lucky them! No fuss — they can just move things along on their own by keeping their mouths shut. Yet VSED (“Voluntarily Stopping Eating and Drinking”) is really just a form of assisted suicide when caregivers are involved. Nurses and doctors are rightly trained to respect patient autonomy, even when we disagree with the choices they make, but patient autonomy is not absolute. We are never bound to cooperate with intentional killing, particularly of the innocent, even when it’s self-inflicted. Indeed, we’re forbidden from doing so (cf. EV 57).

“The pandemic doesn’t have many silver linings,” writes bioethicist Charles Camosy in a recent New York Times op-ed, “but as the number of nursing-home deaths piles up, the news media is being forced to cover a world many of us would prefer to ignore.” I hope we won’t ignore that world ever again. Once COVID-19 has come and gone, let’s remain motivated in attending to and truly caring for our elders until their natural deaths. God forgive us if we don’t.

Let’s Celebrate the Vigil of Pente...