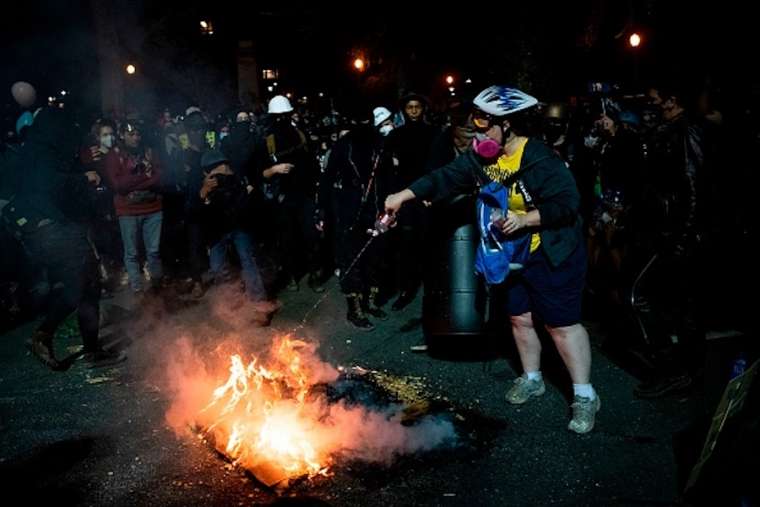 Protestors in Portland, Oregon burned a Bible in the street during a protest outside a federal courthouse in the early morning hours of August 1, according to a local media report.

Around 12:30 am on Aug. 1, people started a fire in the street in front of the federal courthouse which began with the burning of a Bible, then an American flag, with “more and more items” added to keep the fire going,KOIN, Portland’s CBS affiliate, reported.

Yellow-clad members of the group Moms United for Black Lives Matter went over to the fire and put it out with bottles of water and stamped it out around 1 am, according to the KOIN6 report.

Protestors later built a new fire; the reporter did not specify whether the second fire consumed more Bibles.

A video reposted online Aug. 1 by journalists covering the protests appears to show groups of masked people burning American flags and several pieces of paper and books, including one with the words “Holy Bible” visible on the cover.

According toPortland Police’s official report, people started a bonfire in the middle of Southwest 3rd Avenue in front of the federal courthouse in the early morning hours of August 1. People brought “plywood and other flammable material to keep it going,” police said.

Portland has seen more than 60 straight days of protests and unrest following the May 25 death of George Floyd at the hands of Minneapolis police. The protests often have taken the form of crowds of hundreds of masked people protesting, ostensibly, against racism, police brutality, and fascim.

The protests have garnered national and international headlines, with federal agents garnering some criticism for occasionally using tear gas and other forceful methods against protesters.

Some of the protests have been accompanied by riots and looting. In addition to extensive property damage in the city’s downtown, there have been occasional incidents of violence within or adjacent to the protests, including shootings and stabbings.

Protesters in Portland have at various times fired commercial-grade fireworks at the federal courthouse— the epicenter of the violence— and have thrown rocks, cans, water bottles, and potatoes at federal agents, the AP reported. On July 26, the protestors attempted to burn the courthouse down, police reported.

Archbishop Alexander Sample of Portland has spoken out several times against the violence in his city, while encouraging Catholics to renew their faith and hope in God.

He saidin a July 31 video messagethat although he worries about the state of the Church and the world, “it’s a great time to be a Catholic. I really think the Lord is going to ask some great things of us.”

“A lot of the unrest is legitimate, and civilized, and peaceful, and needs to be expressed, and I applaud that and absolutely support that. But we know…some of it has also become very violent and destructive and divisive,” Sample said.

Sample said in a Friday interview with EWTN News Nightly that “with the violence that has erupted here in Portland, the focus has been taken off the central issue that we all need to be looking at and addressing, and that is the issue of the remnants of racism that are still very much present in our society.”

Catholics— and anyone, for that matter— should be outraged at the sin of racism, Sample said, but Catholics must be careful, rational and calm, and should avoid “virtue signaling,” instead putting in the work actually to grow in virtue and to turn to Catholic social teaching in response to racism.

The Church teaches that every person has a dignity that we, as humans, do not bestow on other humans, but rather comes from God, the archbishop said.

Sample has encouraged Catholics to read the U.S. bishops’ 2018 letter on racism, “Open Wide Our Hearts,” and instructed Portland’s parishes to organize groups to read, study, and discuss the letter.

The archbishop did not respond to a request for comment Aug. 3 regarding the specific incident of the Bible burning.