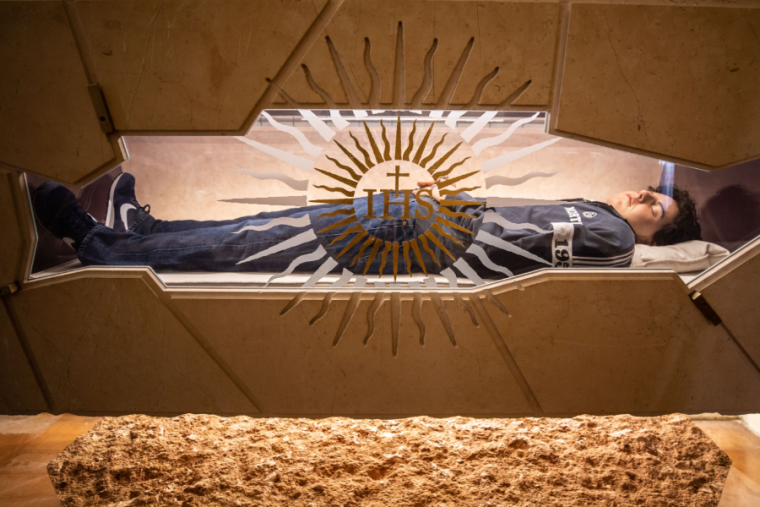 The Diocese of Assisi announced Wednesday that the period of public veneration of Blessed Carlo Acutis has been extended until Oct. 19 due to the number of people who wish to pray at his tomb.

Thousands of people visited the tomb of the young computer programmer and gamer last weekend, according to Bishop Domenico Sorrentino of Assisi, who said that following the Italian teen’s beatification the diocese received numerous additional requests by groups to organize visits.

The public veneration of Acutis’ tomb was originally scheduled to end with a Mass on the morning of Saturday, Oct. 17. But this has now been extended until Oct. 19 to accommodate groups who wish to visit over the weekend, Sorrentino explained.

The teen lies in repose in jeans and a pair of Nike tennis shoes in a tomb with a glass window in Assisi’s Sanctuary of Spoliation in the Church of St. Mary Major. Pilgrims stood in long lines throughout the weekend of his Oct. 10 beatification to pray before Acutis’ tomb.

Among those who traveled to Assisi to ask for Carlo Acutis’ intercession, were many young people, including a group of European students from the Emmanuel School of Mission in Rome (pictured below).

Charles Denonfoux, a 26-year-old student from France, told EWTN at the beatification Oct. 10: “He lived in the same world as we do. He is very close to us and the way we live, and I think it is very moving to have such an example of an exemplary life which we can very easily relate to.”

Emmanuelle Rebeix, 23, said: “He gives me this hope that our time is just as good as any other to be holy.”

Olga Piaskowska, a27-year-old Polish student, said that Acutis hadshown her how one can live out holiness in “ordinary everyday life.”

“Carlo Acutis is, for me, an example of a boy of our agewho gave his whole life to the Lord Jesus, and at the same time he was very happy and had many passions,” Piaskowska said.

“This shows that we are called to live in holiness right in this moment of our lives … and that the way to this is communion with the Lord Jesus through the Eucharist and confession,” she added.

Fr. Boniface Lopez, a Franciscan Capuchin based at Assisi’s Sanctuary of Spoliation, told CNA that he noted that many people who visited Acutis’ tomb also took advantage of the opportunity to go to confession, which is being offered in many languages throughout the 19 days when Acutis’ body is visible for veneration.

“Many people are coming to see Carlo to ask for his blessing … also many young people; they come for confessions.They come because they want to change their lives and they want to come near God and really experience God,” Fr. Lopez said.

He added that he had also encountered many religious sisters and priests coming on pilgrimage to see Acutis.

“Religious come here to ask his blessing to help them to cultivate a greater love for the Eucharist,” he said.

In a Mass at the Basilica of St. Francis of Assisi, Acutis became the first millennial to be beatified by the Catholic Church.

Growing up in Milan in the 1990s and early 2000s, he played video games and taught himself C++ and other computer programming languages. However, many have testified that the center of the teen’s life was his strong devotion to the Real Presence of Jesus in the Eucharist.

From a young age, Acutis expressed a special love for God, even though his parents weren’t especially devout. As he grew older, he started attending daily Mass, often making Holy Hours before or after Mass, and went to confession weekly.

He built websites to inform others about Eucharistic miracles and Marian apparitions around the world. Onhis site, he told people, “the more often we receive the Eucharist, the more we will become like Jesus, so that on this earth we will have a foretaste of heaven.”

Acutis died of leukemia in 2006 at the age of 15. He offered his sufferings for Pope Benedict XVI and for the Church, saying, “I offer all the suffering I will have to suffer for the Lord, for the pope, and the Church.”

The Diocese of Assisi is celebrating Acutis’ beatification with more than two weeks of liturgies and events Oct. 1-19 that the bishop hopes will be an evangelizing force for young people.

Antonia Salzano, the mother of Carlo Acutis, previously told CNA in an interview in 2019 that one of her son’s wishes was to see more young people recognize Christ’s presence in the Eucharist.

“He used to say, ‘When you go to a rock concert, you see thousands of people, or a football match, so when there is the latest phone that is released there are queues in front of the shops, but I do not see this queue of people in front of the Tabernacle.’ So he realized that people don’t understand the importance of Jesus in the Holy Eucharist.”