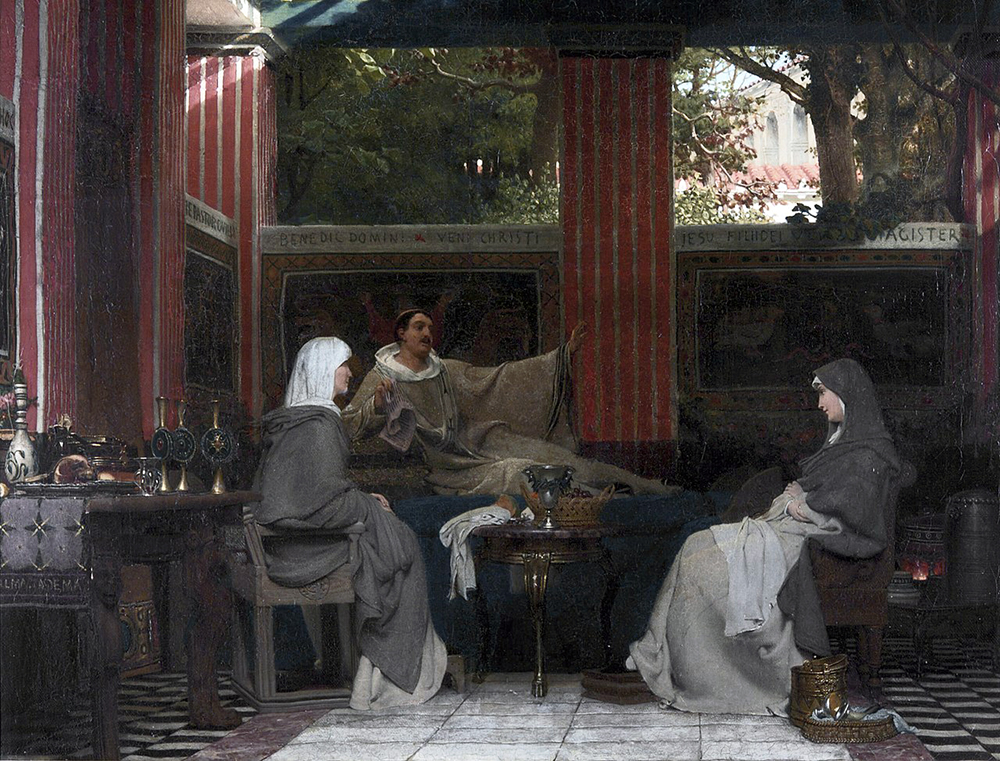 As queen, St. Radegundes dedicated herself to prayer, the sacraments, her own personal penance and the care of the poor.

Imagine what the crowd in Heaven –– the Church Triumphant –– looks like. By the numbers, there are 18,000 officially-recognized, canonized saints rubbing shoulders with 70 million Christian martyrs — along with countless other souls — enjoying the beatific vision, and rejoicing at the Celestial Banquet.

Here’s a fascinating story about one of those millions of saints who most Catholics may not know –– St. Radegundes. Born around the year 520, Radegundes was the daughter of a German pagan Thuringian King Bertachar who had been assassinated by his brother. At the attack, a war broke out and the 12-year-old princess was captured by King Clotaire of Soissons. He treated her with great kindness as befitting her station and had her educated by his tutors. Priests were called to catechize and baptize her.

Radegundes not only embraced Christ but did so with a vengeance. She decided to give herself wholly to him and made her desire to remain a consecrated virgin known to her confessor. The king, however, would have none of it, because he desired the princess as his wife. She acquiesced to her liege and married him.

As queen, she dedicated herself to prayer, the sacraments, her own personal penance and the care of the poor. She fasted regularly and even wore an extremely uncomfortable hair-cloth under her royal gowns. Radegundes was widely acknowledged as having the gift of healing. Wolves and other wild beasts were said to approach her reverently and civilly due to her holiness.

Radegundes was known for her dedication to extreme asceticism. She consumed no animal products, including honey. She ate only legumes and green vegetables and never fruit or eggs, beer or wine. Not content with this level of asceticism, she also abstained from bread, oil and salt during Lent. She even went so far as to secretly bind her neck and arms with three iron circlets which viciously cut into her flesh, and she heated a brass cross with which she branded herself. Her husband, King Clotaire, grew tired of the saint’s piety and often joked that he thought he was marrying a wife andnota nun.

Sensing the king’s obvious displeasure, Queen Radegundes withdrew from the royal court and made her royal way to a Benedictine convent in Noyon where St. Medard consecrated her. From there, Radegundes left for Sais, and later to Poitiers, Aquitaine, in the Kingdom of the Franks, where she built an enormous monastery named the Abbey of Sainte-Croix (French:“Holy Cross”) around 560. Here, she cared for the sick and dying. She made her friend Agnes the first abbess there and thus become the first cloistered nun there.

Her fervent prayers brought her husband King Clotaire to repent of his harsh treatment of her and he sent his royal messengers to beg her to return to him. Another famous saint, St. Germanus of Paris, interceded on her behalf and she was allowed in her remain in her convent.

Radegundes and her sisters lived under the particularly strictRule for Virgins of St. Caesarius of Arles, which meant the nuns learned reading and writing in addition to devoting themselves to the Liturgy of the Hours, Scriptures and copying manuscripts. They supported themselves financially by selling produce, milk and with weaving and needlework.

She chose the name of her monastery because of the relic of the True Cross that the saint obtained from the Byzantine Emperor Justin II. Bishop Maroveus of Poitiers argued that he was too unworthy to install such an important relic and thus deferred the honor. Radegundes, caught between a relic and a hard place, asked King Sigebert to send Bishop Eufronius of Tours to Poitiers to perform the ceremony. To celebrate the relic finally being installed atSainte-Croix, Radegundes’ good friend St. Venantius Fortunatus composed several hymns, including the ethereal and mesmerizingVexilla Regis, which is widely considered one of the most beautiful Christian hymns ever written. It’s still sung on Holy Week, the Triduum and at the Feast of the Exaltation of the Holy Cross.

Interestingly, both Sts. Venantius Fortunatus and Gregory of Tours were close friends with Radegundes and both wrote extensively about her. It was due to Fortunatus’ recommendation that Radegundes wrote her poemsDe Excidio ThoringiaeandAd Artachin.Radegundes was also close friends with St. Junian of Mairé –– a 6th-century Christian hermit and abbot and founder of the Abbey at Mairé-Levescault in Poitou, France. Oddly, the two died on the same day thus sharing the same feast day –– Aug. 13 in 587. Radegundes was 67 years old.

So, when dealing with unruly vegans and those inordinately fond of animals and who say wide-eyed crazy things like the Catholic Church supposedly suppressed women’s education over the past two millennia, simply throw back your head and laugh triumphantly and send them a copy of this article. The soul you save might be your own.

5 Marks of an Adolescent Progressi...