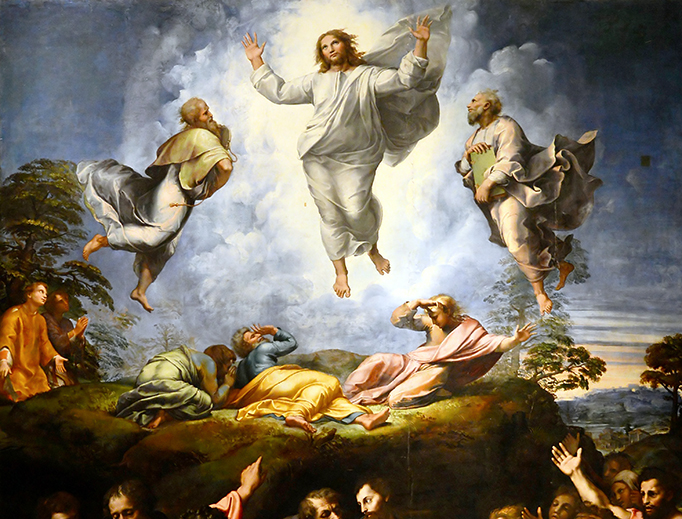 On the Feast of the Transfiguration, we are reminded of this great miracle—which has been memorialized in art and history.

Peter, James and John climbed the mountain with Jesus to pray; and there they witnessed an unveiling of the divine glory of Christ. The miracle of the Transfiguration helped to strengthen the Apostles’ faith, revealing that Jesus was really God. It is an encouragement to all Christians as well, giving us hope that we, too, will be glorified in heaven.

On the Feast of the Transfiguration, celebrated this year on August 6, we are reminded of this great miracle—which has been memorialized in art and history.

On Good Friday in 1520,prominent Italian painter and architect Raffaello Sanzio da Urbino (better known as simply “Raphael”) died at the age of 37. He left behind a large body of work including paintings, altarpieces, sculptures, sketches… and one unfinished oil painting on wood, titled theTransfiguration.

Raphael, busy with other commissions, had worked on theTransfigurationfor four years—but he died prematurely before it could be completed. The work was finished by Raphael’s student Giulio Romano after the artist’s funeral. There is a noticeable difference in the fine details of the top and bottom, probably because the hand of the Master had been stilled.

Even in its unfinished state, Raphael considered theTransfigurationto be his greatest masterpiece. He was so proud of it, in fact, that it was prominently displayed behind his deathbed.

Two scenes from the Gospel of Mattheware depicted in Raphael’sTransfiguration:

At the top,Christ has climbed Mount Tabor with the Apostles, and there he is transfigured—appearing in his glorified body, flanked by Moses (representing the Law) and Elijah (representing the Prophets).
But in the lower part of the painting,the Apostles are struggling to heal a sick child. Only when the transfigured Christ appears in their midst is the child healed.

The original painting is now housed in the Vatican Museum. A large mosaic reproduction of theTransfiguration, created by a team of artists who worked nine years on its fine details, was installed in St. Peter’s Basilica in 1774.