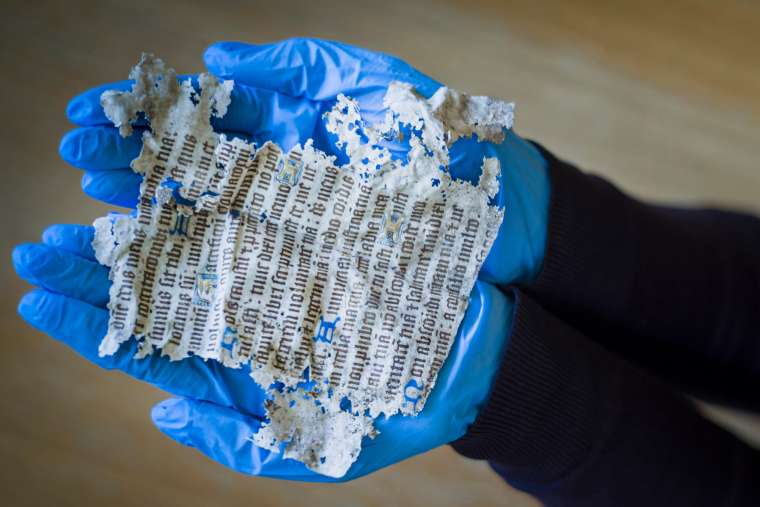 A restoration project at a country house in Norfolk has uncovered items that shed new light on the steadfast faith of a Catholic family in the wake of the English Reformation.

The discoveries include a fragment of a 15th-century illuminated manuscript found by a builder in the eaves of Oxburgh Hall, a moated manor house in the village of Oxborough, the National Trust conservation charity announcedAug. 17.

The builder’s eye was drawn to the parchment by the glint of gold leaf and the blue illuminated initials, which remained bright though the text had lain for centuries amid debris.

Researchers believe that the manuscript may have been used during secret Masses celebrated atthe country house, which has been home to the Bedingfeld family for the past 500 years.

The family once occupied a prominent position in the Tudor royal court but was ostracized after Sir Henry Bedingfeld (pictured below) refused to sign the Act of Uniformity 1588, which imposed fines on those who refused to attend Anglican services.

The Bedingfelds defied the authorities by continuing to practice the Catholic faith, building a priest hole to shelter clergy in the event of a raid. The narrow room was reached via a trap door that blended in with the tiled floor when shut.

Anna Forest, the curator overseeing the restoration work, said that the text on the illuminated manuscript was part of Psalm 39 in the Latin Vulgate translation of the Bible.

James Freeman, medieval manuscripts specialist at Cambridge University Library, suggested that the parchment might have belonged to a Book of Hours, a prayer book for lay people containing an abbreviated form of the Divine Office recited in monasteries.

Forest said: “The use of blue and gold for the minor initials, rather than the more standard blue and red, shows this would have been quite an expensive book to produce. It is tantalizing to think that this could be a remnant of a splendid manuscript and we can’t help but wonder if it belonged to Sir Edmund Bedingfeld, the builder of Oxburgh Hall.”

The parchment was found during a $7.8 million project to reroof Oxburgh Hall, which required workers to lift floorboards in attic rooms to repair floor joists.

After the government imposed a nationwide lockdown to prevent the spread of the coronavirus virus in March, independent archaeologist Matt Champion (pictured above) agreed to continue working, wearing full personal protective equipment and observing social distancing.

He conducted a “fingertip search” under the boards: a painstaking examination of an area that involves crawling along the floor.

Delving into ancient rats’ nests in the northwest corner of the house, he discovered hundreds of artifacts, including scraps of handwritten music from the 16th century. The music may have been played during secret Masses at the house.

When builders returned to the property, which is maintained by the National Trust, they discovered an almost intact book known as the King’s Psalms (pictured below), printed in London in 1568. Previously only one copy of the book was known to have survived. It is kept in the British Library.

The book, which was found in an attic void, was written by St. John Fisher, the Catholic Bishop of Rochester who was executed by order of Henry VIII in 1535.

Researchers hope that the discoveries will eventually be displayed in the house, which hasreopened to visitorsfollowing the easing of lockdown measures. The house is still partially occupied by members of the Bedingfeld family.

Russell Clement, general manager at Oxburgh Hall, said: “These objects contain so many clues which confirm the history of the house as the retreat of a devout Catholic family, who retained their faith across the centuries. We will be telling the story of the family and these finds in the house, now we have reopened again following lockdown.”

“This is a building which is giving up its secrets slowly. We don’t know what else we might come across — or what might remain hidden for future generations to reveal.”