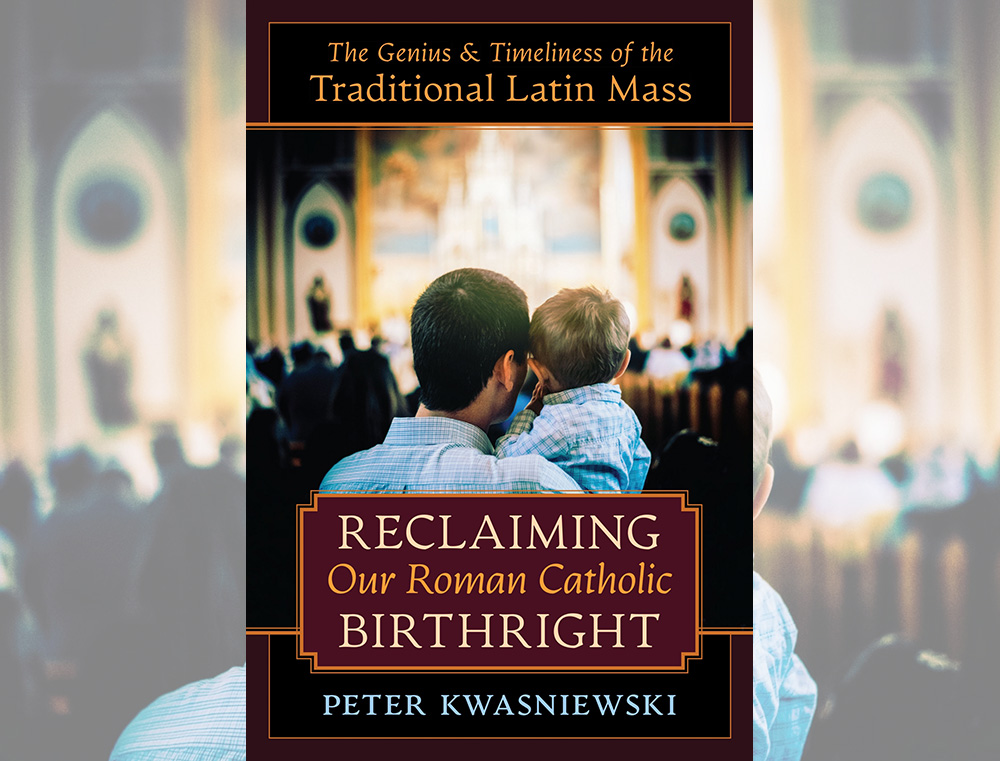 A review of Dr. Peter Kwasniewski’sReclaiming Our Roman Catholic Birthright

In today’s world, it can take a titanic effort to stand up for your Catholic Faith. Even within the realm of the Catholic Church, it may be grueling just to hang on to the truths of our religion. During these enigmatic, cross-laden days, Catholics must be trulyCatholicor they just won’t find their way in the midst of the smothering darkness. And they won’t get very far withoutchutzpah. Thankfully, there are a number of such Catholics carrying the torch to light the way to Heaven for us. They are not afraid to proclaim the Absolute Truth; to draw hearts to that which is true, good and beautiful, and souls to the saving remedy of Sacred Tradition.

One such Catholic is Dr. Peter Kwasniewski, a Thomistic theologian, prolific writer and author of numerous books, liturgical scholar and choral composer, who helped establish Wyoming Catholic College in 2006. His latest little masterpiece,Reclaiming Our Roman Catholic Birthright(Angelico Press, 2020), is a beautiful contemplation on what it means to be authentically Catholic in today’s world. With penetrating insight and blazing courage, this book highlights both the treasures of Sacred Tradition, as well as the right the faithful have to discover them. Kwasniewski reminds us once again of how critical the traditional Mass is to the life of Mother Church, and to water the parched spirits of the faithful. As he explains:

“What we know for sure is that the Church needs her Mass,weneed this Mass, and, in a strange sort of way that bestows on us an unmerited privilege, the Mass needsus.The sacred liturgy handed down to us by tradition has never been more important in the life of Catholics, as we see the ‘pilgrim Church on earth’ forgetting her theology, diluting her message, losing her identity, and bleeding out her members. By knowing, loving, following, and assisting at her ancient liturgy, we do our part to bolster authentic doctrine, proclaim heavenly salvation, regain the full stature of Christ, and attract new believers who are searching for unadulterated truth and manifest beauty.”

Reclaiming Our Roman Catholic Birthrightposes some compelling arguments regarding the value of the ever-glorious Mass of the Ages, especially at this trying time in the history of Christianity. When all the “numbers” are down — the numbers of regular Mass attendees, that of vocations, of seminarians, of baptisms, etc. — the faithful need to turn to God on high, with utter confidence, to the immemorial Mass. In turn, they will be blessed with wisdom and enlightenment.

“Those who persevere in attending the traditional Latin Mass discover layers and dimensions of the Catholic Faith of which they would never have become aware if they had not at some point taken a leap of faith by committing themselves to this ancient ritual, the ‘road less traveled,’” Kwasniewski writes. “Indeed, they find that the Holy Sacrifice of the Mass becomes clearer in its meaning and more potent in its impact.”

Throughout the book, Kwasniewski discusses topics such as: why attend the Mass of the Ages;
why it grants so many graces to its attendees, even though it demands greater effort; why it is the remedy for the contemporary crisis in Catholicism; how it fosters pro-life attitudes; how to answer various charges against it; why the traditional rites are important for educating children; how it teaches Catholics to live life in its proper order; and the power the immemorial Mass has to inspire and nurture vocations.

Truly, Kwasniewski explains in the book, Almighty God deserves our reverence, praise and heartfelt adoration — and what better way to do so, than through the Holy Mass:

“If the Mass really is the solemn, public, formal act of adoration, thanksgiving and supplication offered by Christ the High Priest to the Father, and by His entire Mystical Body in union with Him; if it really is the foremost act of the virtue of religion, by which we offer to God a sacrifice of praise worthy of His glory; if it is the chief expression of the theological virtues of faith, hope and charity; if it is the kingdom of heaven breaking in to our earthly time and space, the nuptial feast of the King of Kings; if it advances the reestablishment of the entire created universe in its Alpha and Omega – if it is all these things (and it certainly is!), then it follows that we cannot possibly offer the Mass with too much solemnity, lavish on it too much care and reverence, expend too much effort on surrounding it with the beauties of music, art and architecture.”

A prayerful read ofReclaiming Our Roman Catholic Birthrightcan win your heart over to the profundity of Catholicism and the form of Holy Mass that kept it vibrantly alive for over 1500 years; the Mass that raised up the vast majority of canonized saints, and carried Mother Church through eras of vicious persecution and heresy. As Kwasniewski declares unashamedly, “For us and for our children, the safe refuge is, one again and always, the traditional Latin Mass, where sanity and sanctity prevail.”