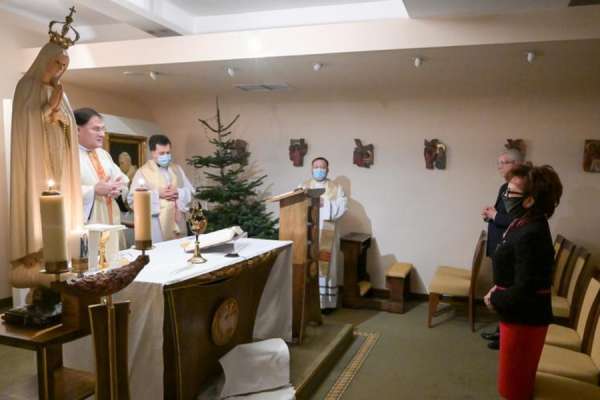 CNA Staff, Dec 28, 2020 / 08:00 am (CNA).- Relics of Auschwitz martyr St. Maximilian Kolbe were installed in a chapel in Poland’s parliament before Christmas.

The relics were transferred Dec. 17 to the Mother of God, Mother of the Church chapel, which also contains relics of the Polish pope St. John Paul II and the Italian pediatrician St. Gianna Beretta Molla.

The relics were introduced formally to both houses of the Polish parliament — the Sejm, or lower house, and the Senate — in the capital, Warsaw, at a ceremony attended by Elżbieta Witek, the Speaker of the Sejm, Senator Jerzy Chróścikowski, and Fr. Piotr Burgoński, chaplain of the Sejm chapel.

A Dec. 18 press release from the Polish parliament said that the relics were handed over following numerous requests from deputies and senators.

Kolbe was born in Zduńska Wola, central Poland, in 1894. As a child, he saw an apparition of the Virgin Mary holding two crowns. She offered him the crowns — one of which was white, symbolizing purity, and the other red, indicating martyrdom — and he accepted them.

Kolbe joined the Conventual Franciscans in 1910, taking the name Maximilian. While studying in Rome, he helped to found the Militia Immaculatae (Knights of the Immaculata), dedicated to promoting total consecration to Jesus through Mary.

After returning to Poland following his priestly ordination, Kolbe founded the monthly devotional journal Rycerz Niepokalanej (Knight of the Immaculata). He also established a monastery at Niepokalanów, 25 miles west of Warsaw, turning it into a major Catholic publishing center.

In the early 1930s, he also founded monasteries in Japan and India. He was appointed guardian of Niepokalanów monastery in 1936, founding the station Radio Niepokalanów two years later.

Following the Nazi occupation of Poland, Kolbe was sent to Auschwitz concentration camp. At a roll-call on July 29, 1941, guards selected 10 men to be starved to death as punishment after a prisoner escaped from the camp. When one of those chosen, Franciszek Gajowniczek, cried out in despair for his wife and children, Kolbe offered to take his place.

The 10 men were held in a bunker where they were deprived of food and water. According to witnesses, Kolbe led the condemned prisoners in prayer and hymn-singing. After two weeks, he was the only man still alive. He was killed by an injection of phenol on Aug. 14, 1941.

Preaching at the canonization ceremony, Pope John Paul II said: “In that death, terrible from the human point of view, there was the whole definitive greatness of the human act and of the human choice. He spontaneously offered himself up to death out of love.”

“And in this human death of his there was the clear witness borne to Christ: the witness borne in Christ to the dignity of man, to the sanctity of his life, and to the saving power of death in which the power of love is made manifest.”

“Precisely for this reason the death of Maximilian Kolbe became a sign of victory. This was the victory won over all systematic contempt and hate for man and for what is divine in man — a victory like that won by our Lord Jesus Christ on Calvary.”