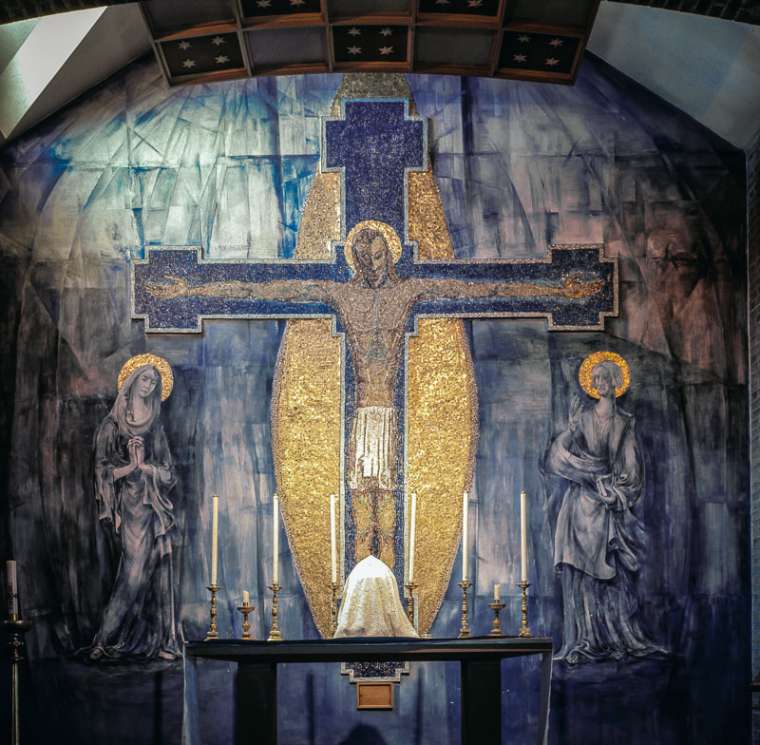 A conservationist charity is calling for the preservation of George Mayer-Marton’s The Crucifixion, a 1955 mosaic and fresco work located in a church that was closed in 2017 amid a diocesan reorganization.

The artwork “is increasingly at risk of vandalism, theft, and the threat of redevelopment,” according to an Aug. 17 statement from Save Britain’s Heritage.

The 26 foot mosaic depicts the crucified Christ in front of a gold mandorla. It is flanked by paintings of Our Lady and Saint John on a background of blue ombré.

The fresco was painted over in off-white in the 1980s, according to Save Britain’s Heritage “new evidence has concluded that the fresco remains intact under the paint and that it is possible to restore the mural to its original condition.”

It is behind the altar of the Church of the Holy Rosary in Oldham, about 12 miles northeast of Salford.

“This is an incredibly rare, well executed and important mural for Oldham and for England by a leading 20th century artist and lecturer – it needs protection and national recognition through listing and SAVE is ready to help find a secure future for it,” the director of Save Britain’s Heritage, Henrietta Billings, said.

The charity has asked that Historic England designate Holy Rosary as a listed building because of the mural.

The public body told the BBC that it is considering a request for listing, but that when it was asked to do so when the church was closed in 2017 it “advised that, although of some interest, it didn’t have enough special interest to meet the high benchmark for listing post-war artwork”.

A spokeswoman for the Diocese of Salford said preservation of The Crucifixion has been “of paramount importance” since the church closure, the BBC reported.

She said that “we have taken action to improve the security of the building to ensure the safety of the work and have co-operated with parties who have shown an interest in it,” and that the diocese would “continue to explore options to find a place where it can be permanently displayed” and is “committed to finding a new home” for the mural.

Another of Mayer-Marton’s mosaics, depicting Pentecost, was transferred in 1989 from Holy Ghost church in Netherton to the Liverpool Metropolitan Cathedral.

Several groups have indicated an interest in preserving The Crucifixion since Holy Rosary’s closure.

A November 2018 piece at The Mallardreported that theChristian Heritage Centrehad received permission from Bishop John Arnold of Salford to raise money to transfer the mosaic to its retreat center, the Theodore House.

The article indicated that the mosaic would dissembled and reassembled at its new location, at a cost of about GBP 250,000, or about $329,000. About $26,000 had been raised at the time of The Mallard’s article.

When Holy Rosary was designated for closure, the Public Monuments and Sculpture Association commented that the mosaic’s loss would be “very regrettable,”according to The Guardian.

Mayer-Marton was born in Hungary in 1897 to an agnostic family of Jewish heritage. He studied art in Vienna and Munich and was prominent among Viennese artists, but fled Austria in 1938 after its annexation by Nazi Germany. He and his wife settled in England, and he taught for the Arts Council of Great Britain and then, beginning in 1952, at the Liverpool College of Art. He died in 1960.