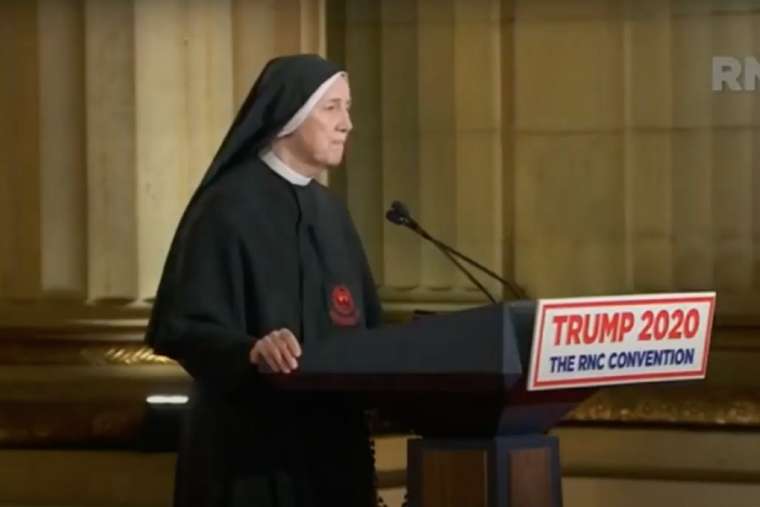 Sister Deirdre Byrne of the Little Workers of the Sacred Hearts of Jesus and Mary, who is also a retired army officer, surgeon, and missionary, said she believes Trump to be “the most pro-life president that this nation has ever had” in remarks that aired on Wednesday night at the convention.

“I must confess that I recently prayed while in chapel, begging God to allow me to be a voice and instrument for human life, and now here I am, speaking at the Republican National Convention,” Byrne began her remarks. “I guess you better be careful what you pray for!”

The sister said that in her view, Trump has the support of the pro-life community and “has a nationwide [army of] religious standing behind him” armed “with our weapon of choice, the rosary.”

While canon law prohibits clerics from taking “an active role in political parties” without the permission of their bishops, religious, like Sr. Byrne, require the permission of their legitimate superiors to make similar partisan interventions. Two priests, Fr. Frank Pavone of Priests for Life, and Monsignor Paul Garrity of the Archdiocese of Boston, have drawn attention recently for their political endorsements.

Byrne also spoke of her work caring for “marginalized” refugees abroad, while saying that “the largest marginalized group in the world” is unborn babies in the U.S.

Although attracting widespread praise for its pro-life policies from many Catholics, the Trump administration has drawn criticism from the U.S. Conference of Catholic Bishops for resuming federal executions after decades without federal use of the death penalty, and for lowering the number of refugees resettled by the U.S. to its lowest recorded level in the 2020 fiscal year, deciding last fall to accept a maximum of 18,000 refugees in FY 2020. The U.S. bishops called that decision “unacceptable.”

Byrne said that pro-lifers must fight for the right to life even if it’s not “fashionable.”

“It’s no coincidence that Jesus stood up for what was just and was ultimately crucified because what he said wasn’t politically correct or fashionable,” she said.

A Chinese human rights lawyer who spoke out against the country’s coercive family planning policies also addressed the convention.

Chen Guangcheng, who is a Distinguished Visiting Fellow at the Catholic University of America in Washington, D.C., escaped house arrest in China in 2012 and sought shelter at the U.S. embassy in Beijing; he was eventually granted asylum in the U.S. with the help of Congressman Chris Smith (R-N.J.).

“In China, expressing beliefs or ideas not approved by the CCP–religion, democracy, human rights–can lead to prison,” he said. “The nation lives under mass surveillance and censorship.”

Vice President Mike Pence delivered the keynote address of Wednesday evening, where he officially accepted the party’s nomination to run for vice president in 2020.

In a lengthy speech where he focused on foreign policy, the economy, and domestic law enforcement, Pence touted the administration’s record supporting the right to life and school choice.

“President Trump has stood without apology for the sanctity of human life, every day of this administration. Joe Biden, he supports taxpayer funding of abortion right up to the moment of birth,” Pence said.

Other convention speakers on Wednesday evening included Richard Grenell, Trump’s former Acting Director of National Intelligence and member of the Log Cabin Republicans, a group which represents conservatives and Republicans identifying as LGBT.

Grenell recently endorsed Trump in a video where he called the president “the most pro-gay president in American history.” Trump tweeted in response “My great honor!!!”

“The Biden-Harris ticket is the most radically pro-abortion campaign in history. They and other politicians are ‘Catholics in Name Only’ and abandon innocent lives,” Holtz charged. “President Trump protects those lives.”

One mother of a child with Down Syndrome spoke about school choice on Wednesday, after she shared her story of having her child Samuel.

“Before Samuel was even born I was told his life wouldn’t be worth living,” Tera Myers said, noting that her doctor encouraged her to have an abortion after prenatal tests revealed her son had Down Syndrome.

“I knew my baby was a human being created by God, and that made him worthy of life,” she said.

COVID Can’t Mute the Splendor of the Season

Debate continues over who should get new COVID vaccines first