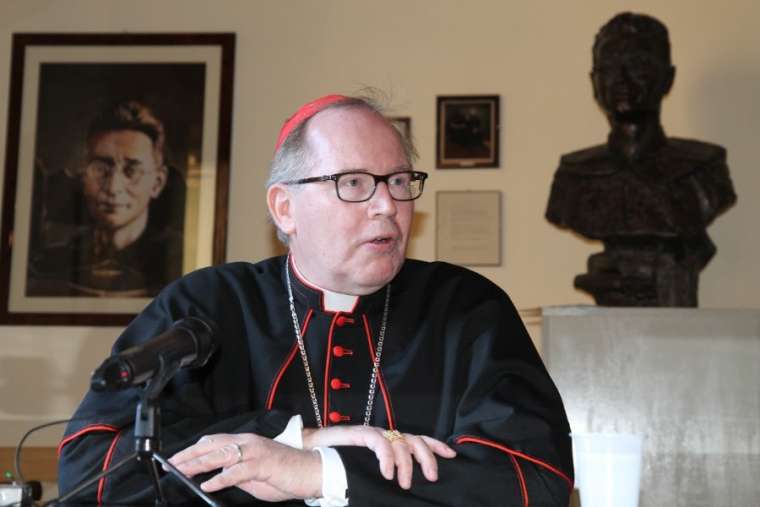 A Dutch cardinal has said that the Netherlands shows that once euthanasia is legalized safeguards are slowly but inevitably abandoned.

In an interview with CNA, Cardinal Willem Eijk noted that criteria for the termination of life had become “ever more extended” in his country since the 1970s.

He said he feared that after parliamentary elections in March, a new government might take up a bill permitting assisted suicide for people who simply believed that their lives were “completed.”

“This implies that the respect for the essential value of the life of a human being is eroded ever more in the last half a century, which was inescapable,” he said.

“For, once accepting the termination of life for a certain measure of suffering, one will always be confronted with the question of whether it should not also be allowed in suffering that is only a little bit less.”

The archbishop of Utrecht’s comments came as the Vatican’s doctrinal office issued a letter reaffirming that euthanasia is “an intrinsically evil act, in every situation or circumstance.”

Thedocument,Samaritanus bonus, also set out guidelines for priests offering pastoral care to those determined to end their lives by euthanasia or assisted suicide.

Eijk told CNA that the Supreme Court of the Netherlands recently made a significant intervention in the euthanasia debate when it ruledon the first prosecution of a doctor since the country’s 2002 euthanasia act.

The Supreme Court was asked to review the criminal court’sdecisionlast yearto acquit a nursing home doctor who performed euthanasia on a patient with severe dementia in 2016. The patient had made a written euthanasia declaration four years earlier.

“The woman’s euthanasia declaration was unclear, in the sense that she had laid down to desire euthanasia, once admitted to a nursing home, at the moment that she would think to be ready for it,” he explained.

“The problem was, however, that she, after having been admitted to a nursing home, was not able to express her will anymore because of advanced dementia. Notwithstanding this, the physician decided to perform the euthanasia in consultation with the family and two physicians, specialized in consulting in euthanasia cases, who agreed with her that the suffering of the woman was without prospect and unbearable.”

The cardinal said that the patient had withdrawn her arm when the physician attempted to administer euthanasia.

The Supreme CourtruledApril 22 that the criminal court was correct to acquit the physician of murder charges.

The 67-year-old cardinal said that the court accepted the testimony of an anesthesiologist who arguedthat patient’s withdrawal of her arm was a reflex action, rather than an indicationof resistance to euthanasia.

“Administering a sedative to the patient before the euthanasia would be acceptable according to the Supreme Court, in case one can foresee unpredictable or irrational behavior, which could complicate the euthanasia,” he observed.

Eijk, who is the lead bishop for medical-ethical questions of the Dutch bishops’ conference, said that the Supreme Court decision did not, however, bring clarity for nursing home doctors.

“Instead of laying down criteria for interpreting the written euthanasia declarations of patients with advanced dementia, the Supreme Court leaves this to the judgment of the physicians involved, by which their uncertainty only grows,” he said.

Eijk added that the doctor’s prosecution probably had a chilling effect on euthanasia in the Netherlands, a country with a population of 17 million. The number of acts of euthanasia and medically assisted suicide fell by 7% in 2018 compared to the year before.

“One may fear that the Supreme Court’s judgment, though making physicians perhaps more uncertain in performing euthanasia in patients with advanced dementia, will not lead in general to a decrease of the number of cases of euthanasia and medically assisted suicide,” he commented.

Eijk cited the prediction of a Dutch expert on euthanasia who said this month that he believedcases woulddouble in the next eight years.

“If his prediction will prove correct, the annual number of euthanasia cases will arrive at well over 12,500, more than 8% of the yearly number of all deaths, in circa 2028,” he said.

He continued: “It is not unlikely that his prediction comes true. Historically and culturally speaking, a slippery slope can be observed, in this sense that the criteria for the termination of life became ever more extended in the Netherlands from the 1970s.”

“In the mid-1990s, euthanasia also started to be performed in cases of psychiatric diseases and dementia. After 2000, the termination of life took also place in severely handicapped newborns.”

In 2016, the health minister and justice ministerannouncedthey would introduce a bill permitting assisted suicide in cases where people were not suffering from a disease but considered their life“completed.”

The bill did not get off the ground, but Eijk said it could be revived after next year’s elections if the government’s composition changes.

“Moreover, a member of parliament, belonging to a left-wing party, presented aprivate members’ billwhich allows assisted suicide in people older than 75 years of age. The risk of this bill is that it could create the impression that the value of life decreases after people have reached this age. Anyhow, the termination of life is nowadays broadly accepted,” he said.

The challenge for priests

Addressing the role of priests in providing pastoral care to those seeking euthanasia, Eijk echoed the new Vatican document.Samaritanus bonussaid that clergy should avoid any gestures that might signal approval, including remaining until the act is performed.

“Good pastoral care for a person who wants to be euthanized requires that the priest, accompanying him, clearly says to him that the intrinsic value of human life is violated by euthanasia,” he said.

“The person involved would therefore be responsible for the violation of this essential value of his life by making himself euthanized, which is a grave and irreversible sin, committed just before his eternal meeting with his Creator.”

Citing Pope John Paul II’s 1993encyclicalVeritatis splendor, the cardinal added: “A real pastor does not lead the people entrusted to his pastoral care to what is often called a ‘pastoral’ solution in the form of ‘a compromise between the Church’s teaching and stubborn reality,’but he should lead them to the truth, also in the field of morals.”

Eijk said that priests should pray with and for the patient, seeking a change of heart. They should also propose palliative care as an alternative, and ensure that the patient is not lonely and is surrounded by caring people.

“The request for euthanasia is not rarely a cry for help,” he observed. “When adequate care is offered, several people who said they wanted to be euthanized do not persist in this request when bystanders give attention to their fears and inner struggles.”

Eijk noted that the media had harshly criticized priests who refused to administer last rites or celebrate funerals of people opting for euthanasia.

“The priests in question were requested to administer them the last sacraments before physicians would terminate their lives. The persons involved often liked to fix already beforehand a date for their funeral and expressed their wishes about this,” he said, explaining that the Dutch bishops issued clear guidelines to support priests in these situations.

“Another situation occurs when the priest is required to celebrate the funeral and he comes to know only afterwards that the person for whom the funeral will be celebrated died by euthanasia,” he noted.

Eijk stressed that in principle priests should not celebrate funerals in these circumstances.

“However, priests practically always celebrate the funeral the same when they can suppose that the person involved committed suicide because [they were] suffering from a depression or another psychiatric disease,” he said.

“These are factors which limit his freedom, such that his responsibility is diminished. Terminating or making terminate his life, though a grave evil in itself, isthereforein these cases not a mortal sin. The priest may then celebrate his funeral. One can and should pray for sinners in the first place.”

A challenge for all Catholics

The cardinal suggested that Catholics could do more to clarify that, while they firmly oppose euthanasia, they do not believe life must always be prolonged with burdensome medical treatment.

He said: “A patient deciding to forego non-proportionate treatment and who consequently dies does not do something that is ethically equivalent to suicide, but merely accepts that life must come to an end.”

“A medical doctor, by not offering non-proportionate treatment to the patient or dissuading him to undergo such treatment, as a consequence of which the patient dies, does not do something ethically equal to terminating his life.”

“When the collateral effects, the complications and expenses are not proportionate to the chance of saving life or restoring or preserving health, one is allowed to forego it, albeit that it might lead to a shortening of life. Letting someone die is not always ethically equal to actively making somebody die.”

Doctors are, however, obliged to offer proportionate treatment to save lives or preserve health.

He noted that some argue that, if you accept that someone’s life may be shortened by painkilling drugs, then you must also accept euthanasia. But in this case, the shortening of life is only a “collateral effect” of the medicine, which is intended to do no more than alleviate the symptoms.

“Collateral effects which are proportionate to the gravity of the disease or symptoms are generally accepted in medicine,” he said.

“In extreme cases it is allowed to apply palliative sedation, in which the conscience of the patient is partly or completely suppressed, when no alternative is available to alleviate unbearable pain and other symptoms, after that the patient has fulfilled his social duties, for instance with regard to his last will, and has prepared himself on the eternal meeting with God by receiving the sacraments.”

The euthanasia debate presents Catholics with another daunting challenge: convincing secular societythat suffering can be meaningful when seen in the light of Christ.

PraisingJohn Paul II’s 1984apostolic letteron suffering,Salvifici doloris, the cardinal said: “A person who suffers can unite himself in his suffering with the suffering of Jesus. Jesus says: ‘Take my yoke upon you, and learn from me; for I am gentle and humble in heart, and you will find rest for your souls. For my yoke is easy, and my burden is light’ (Matthew 11:29-30).”

“Jesus will in the end carry the cross of him who decides to participate in Christ’s suffering. He can then dedicate his suffering to relatives, friends, others or all people in order that God give them the grace they need in order to carry their crosses or for their conversion to Christ and their eternal life.”

“Uniting oneself in his suffering with that of Christ does not take suffering away, but makes it bearable.”