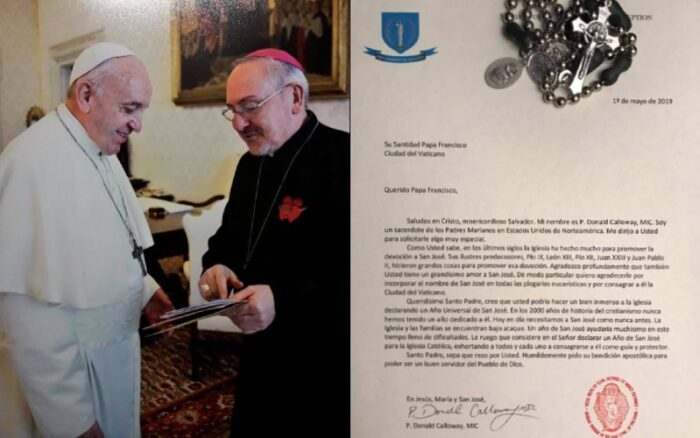 Praise God for the Year of St. Joseph!

Pope Francis announced the Year of St. Joseph on Dec. 8, the Solemnity of the Immaculate Conception and the 150th anniversary of the declaration of St. Joseph as patron of the Universal Church.

The decree comes after Fr. Donald Calloway called for Pope Francis to declare a Year of St. Joseph after releasing his book, Consecration to St. Joseph. Fr. Calloway said he is unsure if this is a direct response, but that “there is no doubt the pope saw and read my letter.”

Fr. Donald Calloway shared an amazing story on Facebook about his call for the Year of St. Joseph. He wrote Pope Francis a letter in 2019 “asking him to please consider declaring a Year of St. Joseph,” because the Catholic Church has never had one.

Fr. Calloway included the letter he sent Pope Francis, which Bishop Hector Zordan of the Diocese of Gualeguaychu, Argentina hand-delivered.

“On May 4, 2019, Bishop Hector Zordan from the Diocese of Gualeguaychu, Argentina hand-delivered the letter to Pope Francis while in Rome. The picture shows the bishop and the pope holding my letter and discussing it.

“Today, December 8, 2020 (the Solemnity of the Immaculate Conception and the exact date of the 150th anniversary of the declaration of St. Joseph as the Patron of the Universal Church, Pope Francis declares a Year of St. Joseph!

Fr. Calloway also posted a video reacting to the news. He said this is “one of the happiest days of my life” and the “best thing that Pope Francis has done.”

“We’re going to see unbelievable things happen now, my friends. I am absolutely positive of this.” Fr. Calloway says. “The Church has, in some way, awakened the sleeping giant: St. Joseph. The secret weapon of God has been brought on the battlefield right now, at a critical time.

“Get ready, my friends. Great things are on the horizon.”

St. Joseph, pray for us!

The Year of St. Joseph: What Catho...