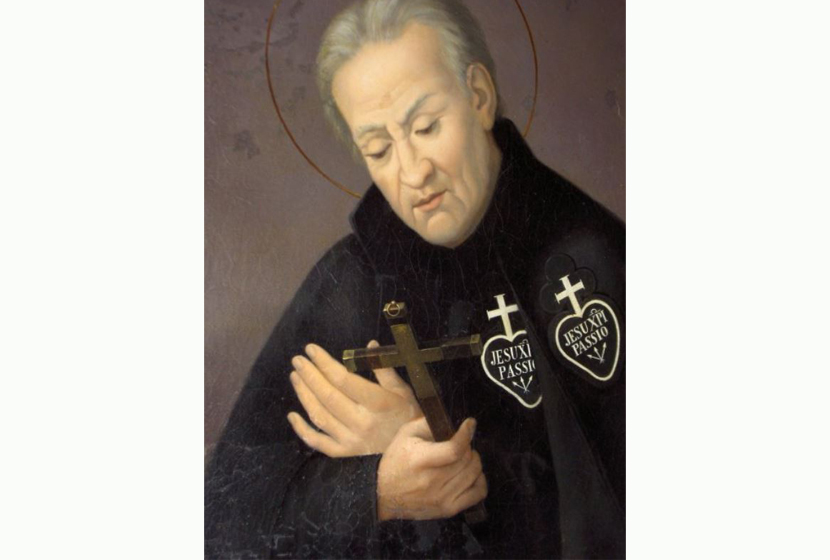 From CNA
Paul Francis Daneii was born at Ovada, Piedmont in northern Italy on January 3 of 1694. After receiving a vision, and while still a layman, he founded the Barefoot Clerks of the Cross and the Passion (Passionists) in 1721 to preach about Jesus Crucified. He became a preacher of such power that even hardened soldiers and bandits were seen to weep. At one point all the brothers in the order deserted him, but in 1741 his rule was approved by Pope Benedict XIV, and the community began to grow again.

His parents, Luke Danei and Anna Maria Massari, were exemplary Catholics, and from his earliest years the crucifix was his book, and the Crucified his model. Paul received his early education from a priest who kept a school for boys in Cremolino, Lombardy. He made great progress in study and virtue and spent much time in prayer and daily Mass. He frequently received the Sacraments, faithfully attended to his school duties, and gave his spare time to reading good books and visiting the churches, where he spent much time before the Blessed Sacrament, to which he had an ardent devotion. At the age of fifteen he left school and returned to his home at Castellazzo, and from this point on his life was full of trials.

In early manhood he renounced the offer of an honorable marriage, and also a good inheritance left him by an uncle who was a priest. He kept for himself only the priest’s Breviary.

Inflamed with a desire for God’s glory, he formed the idea of instituting a religious order with an emphasis on the Passion. Vested in a black tunic by the Bishop of Alessandria, his director, bearing the emblem of our Lord’s Passion, barefooted, and bareheaded, he retired to a narrow cell where he drew up the Rules of the new congregation according to the plan made known to him in a vision, which he relates in the introduction to the original copy of the Rules.

After the approbation of the Rules and the institute, the first general chapter was held at the Retreat of the Presentation on Mount Argentaro on April 10, 1747. At this chapter, St. Paul, against his wishes, was unanimously elected first superior general, an office which he held until the day of his death. In all virtues and in the observance of regular discipline, he became a model to his companions. “Although continually occupied with the cares of governing his religious society, and of founding everywhere new houses for it, he never ceased preaching the word of God, burning as he did with a wondrous desire for the salvation of souls” (Brief of Pius IX for St. Paul’s Beatification, Oct. 1, 1852).

Sacred missions were instituted and numerous conversions were made. He was untiring in his Apostolic labours and never, even to his last hour, remitted anything of his austere manner of life, finally succumbing to a severe illness, worn out as much by his austerities as by old age.

Among the distinguished associates of St. Paul in the formation and extension of the congregation were: John Baptist, his younger brother and constant companion from childhood, who shared all his labours and sufferings and equaled him in the practice of virtue, Father Mark Aurelius (Pastorelli), Father Thomas Struzzieri (subsequently Bishop of Amelia and afterwards of Todi), and Father Fulgentius of Jesus, all remarkable for learning, piety, and missionary zeal. Venerable Strambi, Bishop of Macerata and Tolentino, was his biographer.

Constant personal union with the Passion and Cross of our Lord was the prominent feature of St. Paul’s sanctity, but devotion to the Passion did not stand alone, for he carried to a heroic degree all the other virtues of a Christian life. Numerous miracles, in addition those special ones brought forward at his beatification and canonization, attested the favour he enjoyed with God.

Miracles of grace abounded, as witnessed in the conversion of sinners seemingly hardened and hopeless. For fifty years he prayed for the conversion of England, and left the devotion as a legacy to his sons. The body of St. Paul lies in the Basilica of Saints John and Paul in Rome.

He died on October 18, 1775, was beatified on October 1, 1852, and canonized on June 29, 1867. His feast is celebrated on April 28. The fame of his sanctity, which had spread far and wide in Italy during his life, increased after his death and spread into all countries. Great devotion to him is practiced by the faithful wherever Passionists are established.