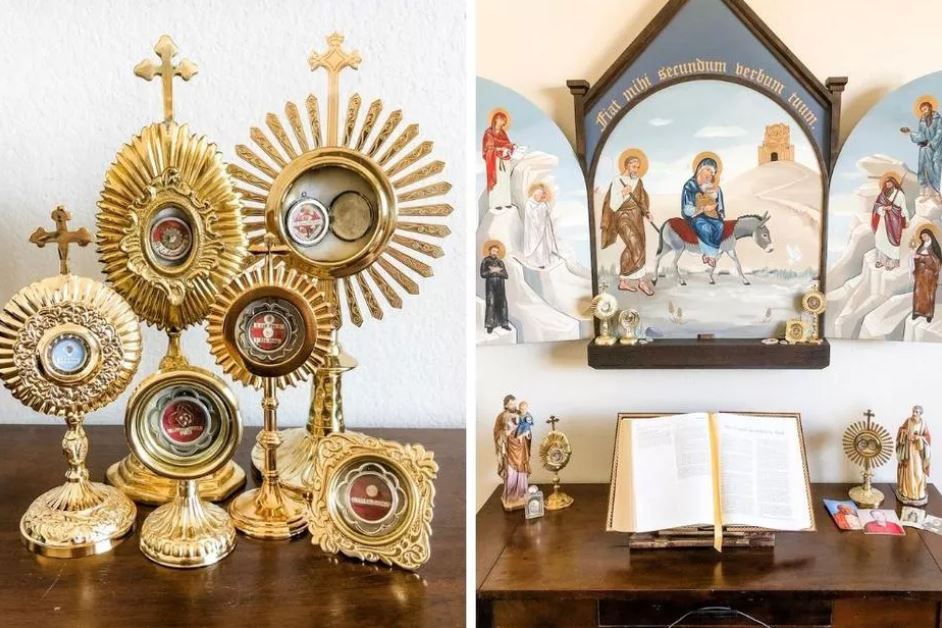 All these holy remains of saints are now housed in reliquaries in the home of the Cotter family in suburban Denver.

The fascination and spiritual draw of relics, or remains, of the saints — anything from physical pieces of the holy body or objects that have touched the holy bones — can inspire the faithful, promoting devotion to the holy men and women to whom they belonged.

The Church shows sanctity for relics and their connection to the faith by placing one or more in altars. Many churches, chapels and monasteries have other relics of one saint or another behind glass in a reliquary. St. Anthony’s Chapel in Pittsburgh houses an astounding 5,000 relics.

Lisa Cotter has a deep devotion to the saints and had a long desire to have a first-class relic in the family’s home.

“I’ve always loved to study and read about the saints and their stories and have a deep devotion to the saints in general, asking for their help in time of need,” she told the Register.

When as a family she and husband Kevin were Fellowship of Catholic University Students (FOCUS) missionaries for 11 years, they were in Rome on the feast day of then-Blessed John Paul II, when Lisa  was given a second-class relic of the Pope by a woman working on his canonization cause. It was a holy card with a small piece of his tunic, which is a second-class relic because it is a piece of something that was in a saint’s possession, such as a piece of clothing or personal article that belonged to him or her. In contrast, first-class relics are any part of a holy body such as a piece of bone or a strand of hair; and third-class relics are items that have touched the saints’ bodies or tombs, such as holy cards, images, oil or cloths.

“It’s so powerful to have a piece of this person who I looked up to and wanted to be like him in his holiness and character,” Lisa said of St. John Paul II. “From then on I really wanted to have a first-class relic. I wanted to have that connection with more saints if possible.” It wasn’t long before her spiritual wish turned into more than she asked for.

When the Cotters’ 15th anniversary rolled around, Kevin decided to give his bride something golden. Since Lisa isn’t a “jewelry person,” he bought her an empty gold reliquary.

But what about the relic? The Church strictly forbids the sale of first-class relics. Kevin said he told Lisa they would start praying to the Lord for a relic if it would be his will to fill the reliquary in their home through a gift. Lisa let the story be known. In their home’s prayer room, they put the empty reliquary on a shelf that is attached to a custom triptych displaying pictures of the Holy Family in the center. The two open triptych doors have images of each of the family namesake saints for Kevin, Lisa and their four children, Mary Claire, Paul Brian, Grace Charlotte and Isaac Augustine.

Shortly after, a friend about to be ordained “connected us with a religious who said, ‘I’d love to meet you all and hear a bit of your story,’” Lisa recalled. They were overwhelmed when they met the friend, a religious brother, who has received about 2,000 relics from churches and monasteries that had closed. His job was caring for these holy relics and having them continue to do what they were intended to do: inspire the faithful. He desires to remain anonymous because of the privacy he needs for this work.

“The amount of relics he cared for was incredible,” Lisa told the Register, still surprised. “Everything you can imagine was there. Every single one of the apostles was in one reliquary.”

The Cotters talked to the religious brother about their family and their children and how Kevin is now executive director of The Amazing Parish, which helps churches thrives, and Lisa is a Catholic speaker, author and founder of an apostolate called Made to Magnify.

As they talked about namesakes for the family, which is very important to the Cotters for their children, the brother started pulling out relics. “We thought we’d come home with one,” Lisa said. “That was all we asked for.”

“It was better than Christmas,” Lisa said. “It was one of the most memorable days of my life.”

To house their gifted relics, the Cotters bought five more reliquaries from a Catholic shop because “the saints needed a new home and a place of honor for them on the prayer table or the ledge of our triptych,” Lisa said. All five of the Jesuit saints, including Sts. Ignatius of Loyola and Aloysius Gonzaga, are together in one reliquary, as well as two of the married saints, St. Louis of France and St. Elizabeth of Hungary (although they were not married to each other).

House and Home for Saints

The gift of relics has also been a blessing to Carrie Gress, co-author of Theology of Home II: The Spiritual Art of Homemaking, as well.

“[T]hey are handed down among families or given as gifts,” writes Gress in Theology of Home II. “The gift most often comes from a priest or religious.” In her own family’s case, “friends gave us a relic of St. Teresa of Avila after they inherited many from a beloved priest upon his death.” Then a seminarian gave her relics of St. John Neumann and St. Francis Xavier Seelos. “It is always a blessing to have these relics on hand, and to venerate them in a special way on the saint’s feast day,” she explained.

Writer Amber VanVickle warmly recalled, in an online post at TheologyofHome.com, the first-class relic of St. Francis of Assisi her parents had when she was growing up, remembering “that beyond its physical nature, I was aware that something else was present. Many times I found myself clutching it in times of illness, or touching it with a whispered prayer. Somehow I knew, even then, that within that reliquary something holy and worthy of honor was present.”

Among the saints’ relics the Cotters were given, St. Maria Goretti is special “because we have young children and because I speak to a lot of youth and young adults about dating and chastity, and St. Maria is a patroness of chastity,” Lisa explained. She and Kevin co-wrote Dating Detox: 40 Days of Perfecting Love in an Imperfect World.

Sometimes saints choose us, Lisa mentioned, and in this case, it seems some of the saints chose the Cotter family, as if Maria Goretti said, “You don’t know me well, but you need to know me,” Lisa explained. “Maria Goretti is in our home, and we got to know a lot more about her.”

The addition of the relics — which joined their third-class relics of St. Pio (Padre Pio), St. Jude, St. Gianna Molla and St. Teresa of the Andes — has added to the spiritual atmosphere in the Cotters’ prayer room. As Lisa explained, “It’s been amazing how that room has come alive in a new way.

“And we see our kids in there unprompted. We see them praying with the saints — you can feel their presence. There’s a change in our home with the bones of these saints being there.”

Kevin also points out how the children are growing in their prayer life and knowledge of the saints. “Different people respond to the faith in different ways,” he said. “The big theological things in the faith are for others. For my kids, the reality of the saints, these people who really lived, and their mere presence really makes the faith tangible to them. It’s fun to see them gravitate to the prayer room and think about ‘What did the saint look like?’ and ‘How can I be like them?’”

“It’s a priority for us for them to know the story of their saints and who their namesakes are,” Lisa added. Thanks to their parents’ devotion, the Cotter children understand the saints and their stories and have a connection to them. Lisa and Kevin have taken three of the children to the tombs of their namesakes.

Lisa speaks about how the bones of these people remind us they walked the earth, pursued holiness and sanctity, fought the good fight and won. “We know that body is going to come alive again. It’s not meant to rest behind this glass.”

She emphasized that personally praying and contemplating the saints in these relics has “really encouraged me in my faith and helped me to desire holiness in a deeper way, a new way.”

“These saints are in our home watching over it. It’s been a huge blessing and gift to our family. We’ve been blessed getting to steward little pieces of the saints.”

And Kevin finds that “for me these relics make holiness tangible in a very clear way. Just the fact I can see the saints makes me see holiness is possible. They faced challenges just like me. It made the faith more real to me and helped me understand the lives of the saints and how I can live out that life following Christ in my own life today. When you see a saint’s life, it makes you think about your own life and ask the question, ‘How can I be more like the saints?’”

He loves St. Ignatius of Loyola and looks to his example as a founder and leader. “As director of Amazing Parish,” he said, “it helps me realize the way he had to make decisions and had courageous ideas. That helps me in my work with Amazing Parish and the kind of leader I can be.”

The Cotters don’t plan on keeping the relics to themselves. Lisa looks forward to the day the coronavirus is done and she doesn’t have to do talks over Zoom and will bring these holy remains of saints to events and conferences.

“I don’t want these to be something our family hoards, but something that our family shares and brings to people,” Lisa said, “or lends to someone else’s home in time of need because they are not just for us; rather, they are for the Body of Christ, the Church.”