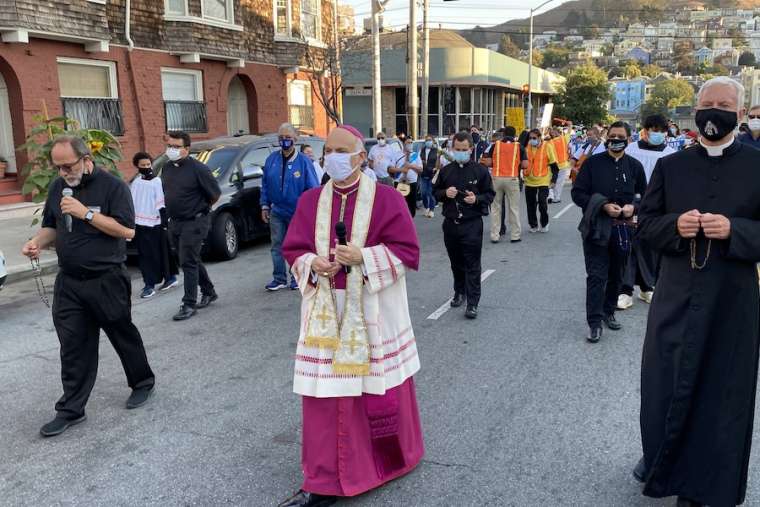 San Francisco Archbishop Salvatore Cordileone encouraged Catholics to renew their respect and devotion to the Eucharist as indoor Masses resume across the city.

“Have we accepted this fast from the Eucharist as an opportunity God has given us to renew our devotion and love for the sacrament?” Cordileone said during his homily at the rally outside the Cathedral of St. Mary of the Assumption.

The office of San Francisco’s mayor announced Sept. 29 that places of worship will be permitted to hold services indoors at 25% capacity, up to 100 people, beginning Sept. 30.

The city had been allowing only one worshipper at a time in places of worship, regardless of the building’s size, while allowing multiple patrons in other indoor establishments. Parishes in San Francisco had been adapting to the restrictions by holding multiple concurrent, outdoor Masses each Sunday.

The Oct. 3 annual rosary rally began at St. Anthony of Padua Church in the city’s mission district with a procession to the cathedral.

Reflecting on the city’s namesake, St. Francis of Assisi, Cordileone held up Francis’ devotion to the Eucharist as an example, and noted that in times of scandal, corruption and division within the Church, the temptation can arise to criticize and “do things our own way.”

“Instead, let us take our lead from the poor man of Assisi, and tend to the inner work: prayer, fasting, love and respect for the Blessed Sacrament, embracing and serving the poor,” he said.

“The real work of reform begins within each soul and within the heart of the church.”

Cordileone urged Catholics to prepare for receiving Communion by frequently going to confession, praying and attending Eucharistic adoration, CatholicSF reported. Worshippers should be prayerfully silent whenever they are in the presence of the Eucharist and should dress properly for Mass, Cordileone said.

At the rosary rally, five families were selected to pray each decade in a different language: English, Spanish, Tagalog, Vietnamese and Latin.

At the end of the rosary, Archbishop Cordileone renewed the archdiocese’s consecration to the Immaculate Heart of Mary, which was first done in 2017, CatholicSF reported.

Cordileone also encouraged Catholics to participate in a national virtual rosary,to be led by Archbishop Jose Gomez of Los Angeles Oct. 7, on the feast of Our Lady of the Rosary.

Beginning Sept. 30, outdoor worship services in San Francisco may host up to 200 people. Singing or chanting indoors will be prohibited, and “the place of worship must conduct a health check of patrons before they enter the facility.”

An estimated 1,500 Catholics in San Francisco had marched in Eucharistic processions across the city Sept. 20 to protest the city’s continued restrictions on public worship.

“One person at a time in this great Cathedral to pray? What an insult. This is a mockery. They are mocking you, and even worse, they are mocking God,” Cordileone said at the Mass following the processions Sept. 20.

The US Department of Justice had on Sept. 25 warned San Francisco officials that its restrictions on public worship in the city may have been unconstitutional.

TheDOJ on Sept. 25 sent a letter to Mayor London Breed, warning that the city’s rule allowing only “one worshipper” in places of worship at a time regardless of their size— while allowing multiple patrons in other indoor establishments— is “draconian” and “contrary to the Constitution and the nation’s best tradition of religious freedom.”

Archbishop Cordileone said last week that “respect for each other’s rights and compassion for each other’s needs are core San Francisco values. God bless Mayor Breed for responding to her constituents’ call.”

He added, however, that “California’s limit of no more than 100 people inside of a house of worship regardless of the size of the building is still unjust. We want and we intend to worship God safely: with masks, social distancing, sanitation, ventilation, and other such safety protocols. But we will not accept believers being treated more severely than other, comparable secular activities.”

Aid to the Church in Need providin...