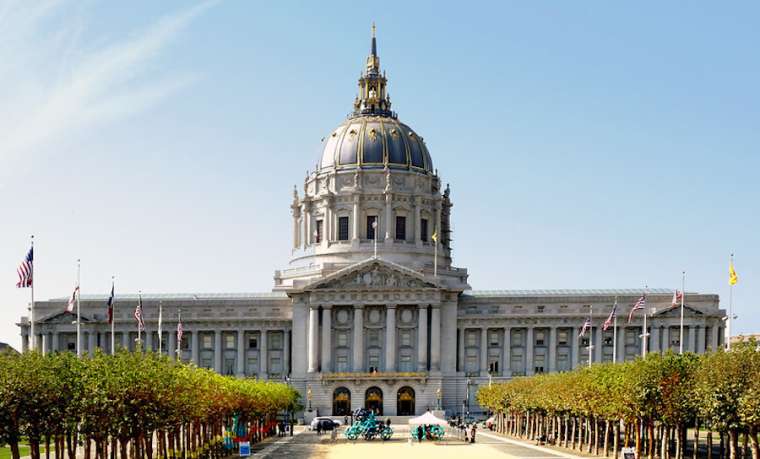 The Archbishop of San Francisco has called Catholics to participate in Eucharistic processions across the city Sept. 20, and to attend socially distant Masses outside city hall – in part to protest the city’s revised limits on public worship.

Archbishop Salvatore Cordileone said in a memo to priests Sept. 13 that separate processions would begin at St. Anthony, St. Patrick, and Star of the Sea parishes, and would converge at United Nations Plaza near San Francisco City Hall.

The combined processions will then proceed to city hall, where San Francisco priests, led by the archbishop, will celebrate multiple outdoor, socially-distanced Masses in both English and Spanish.

San Francisco Mayor London Breed had announced this week that starting Sept. 14, houses of worship may have 50 people at religious services outdoors. In addition, indoor private prayer is allowed, but only one person at a time is allowed inside.

In contrast, hotels in San Francisco are fully reopened; indoor gyms are set to reopen at 10% capacity; and most retail stores are allowed to operate at 50% capacity, while malls are restricted to 25%. Gyms operated in government buildings for police officers and other government employeeshave already reopened.

In addition, Archbishop Cordileone has noted, businesses requiring extended, close one-on-one contact will also be reopening Sept. 14, such as hair salons, nail salons and massage parlors, but “we are allowed only one person in church at a time for prayer.”

While San Francisco Catholics have been gathering outside for Masses, unable to gather inside their churches,the Bay Area is experiencing some of the worst air quality in the world, because of smoke and other pollutants coming from wildfires ravaging the West Coast. Air quality is expected to improve some this week, but worsen over the weekend, as smoke is pushed toward the city by coastal winds.

Cordileone said the archdiocese has ordered 100 banners in English, 15 in Spanish, and 5 in Chinese that read: “We Are Essential: Free the Mass!” He asked that parishioners carry the banners during the Eucharistic processions.

The archbishop has noted that the state’s legitimate concern for health and safety does have some bearing on how the Church operates— for example, there are good reasons why church buildings must be built with respect to code.

Cordileone said priests at many parishes around the archdiocese, including the Cathedral of St. Mary of the Assumption, arecelebrating multiple Massesevery Sunday— outside, and spaced out— in order to adapt to the restrictions.

“The Body and Blood of Christ is the source and summit of our Faith. People are hungry for the Eucharist, and many priests are responding to the call as best they can,” he said.

The City of San Francisco has been closely monitoring Catholic churches in the city and hasrepeatedly issued warningsto the archdiocese for apparent health order violations.

Cordileone said he himself has noted “very few” violations of the city’s health orders by parishes in the archdiocese, although the few that have occurred have garnered heavy criticism in the secular press.

While Cordileone said city officials have been “cordial and respectful” in their dialogue with the archdiocese, he added that the city still has not responded to the archdiocese’s safety plan— outlining how churches could be safely opened for indoor services— which they submitted in May.

The Benedict XVI Institute for Sacred Music and Divine Worship, which provides liturgical resources in the archdiocese, shared a petition Aug. 31 in support of Cordileone’s statement calling for the lifting of restrictions on the Mass. To date more than 3,500 people have signed.

A Pentecostal church challenged California’s church service limits earlier this year, arguing that houses of worship were being unfairly treated in a more strict manner than other secular venues, including restaurants, hair salons, and retail stores.

In May, the Supreme Court sided with the state of California. In a 5-4 decision, Chief Justice John Roberts argued that the court lacks the expertise and authority to second guess the decisions of elected officials in the context of public health decisions during a pandemic.

In several other states, churches have successfully challenged restrictions against houses of worship, on the grounds that public officials were not able to justify the decision to treat them more strictly than other secular gathering venues.