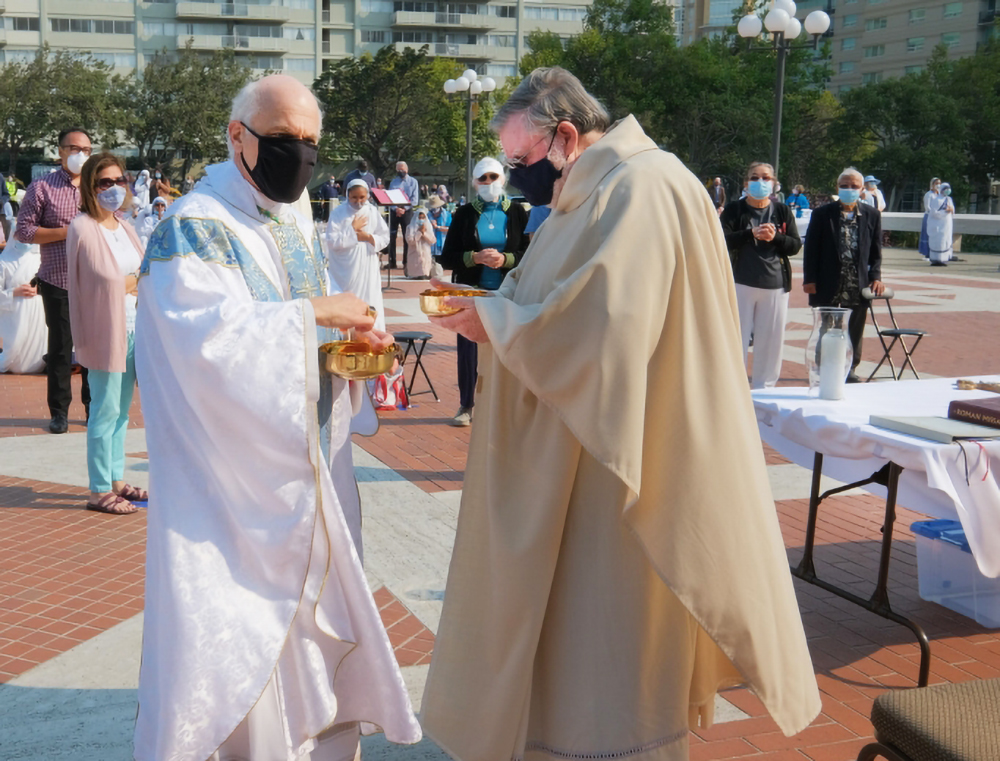 COVID-19 has taken much from my parishioners. The consolation of the Mass should not be one of these things.

Archbishop Salvatore J. Cordileone recently called on Mayor London Breed to lift the unfair restrictions on the Mass. He is right.

San Francisco is the only government in the entire Bay Area to tell people of faith: Only 12 people allowed and only outdoors. This is both an injustice and a lack of compassion.

I am the pastor of the Mission Churches in San Francisco. My parishioners are part of the rich diversity of San Francisco and include many poor, hardworking faithful people. Coronavirus has taken much from them. The consolation of the Mass should not be one of these things.

One of my parishioners, an aspiring physician, Giselle Ortega shared her frustration with me. “When the order to reopen business was released, Mission Parishes came up with a plan to keep the churches sanitized and safe for a small amount of people to come and celebrate Mass. We even rehearsed several times to make sure we were doing things properly and avoid contact as much as possible before Churches opened. But the city never give us an opportunity to do so,” she told me, adding, “If you know how important feeding the body is, then you would also understand us when we say how important it is to feed our soul by taking Holy Communion.”

There is also real concern about the increase in domestic abuse and violence, an issue Ortega is also concerned about. She says, “Church is one way people find comfort and refuge from it. I assure you, you would not find anyone that would help you as a church, a community, would.”

Like many San Franciscans, she sees the blatant unfairness in how our faith is being treated: “We are not treated nor heard the same.”

I am proud to support Archbishop Cordileone’s call to lift the unfair burdens Mayor London Breed is placing on the Mass. Our worship cannot be livestreamed. My parishioners, who come from some of the struggling neighborhoods in San Francisco’s Mission District, want and need the Body and Blood of Christ. They are eagerly answering the call to outdoor worship on the Cathedral Plaza and also tosignthe BenedictInstitute.org’s petition calling on Mayor Breed to open the Mass. I have also circulated it by hand. In just the first few days, more than 1400 have signed the call to free the Mass.

In response to Archbishop Cordileone’s call, Mayor Breed has responded by easing the 12-person-outdoors rule in mid-September. But with September rains coming, this is not enough.

This weekend the Latino community will be with the Archbishop and more than nine priests at St. Peter’s Church in the Mission District celebrating concurrent Masses for the Faithful.

With proper protocols put in place, this can be done safely. As three infectious disease specialistsrecently wrote:“Over one million public Masses have been celebrated following guidelines to prevent the spread of the virus…for Catholic churches following these guidelines, no outbreaks of COVID-19 have been linked to church attendance.”

As the Archbishop said, “Ours and others’ faith is being treated as less important than a trip to the hardware store, or a nice dinner out on the patio.”

For Catholics, the Body and Blood of Christ is the center of our Faith. We need His Real Presence and we need to have this together. Hundreds of us will come over on Sunday to the outdoor Mass on the Cathedral Plaza to show our support for Archbishop Cordileone and to witness to the city of San Francisco how important the Mass is to us all.

Catholic pastors like me are overwhelmingly responsible citizens who understand it is important to protect our own and our neighbor’s health. But to Mayor London Breed, I say: We need the spiritual and emotional consolations of the Mass. Stop these biased regulations that are hurting some of San Francisco’s proudest and most vulnerable citizens.