‘Say the Black, Do the Red’ — Liturgical Abuse and Pastoral Malpractice 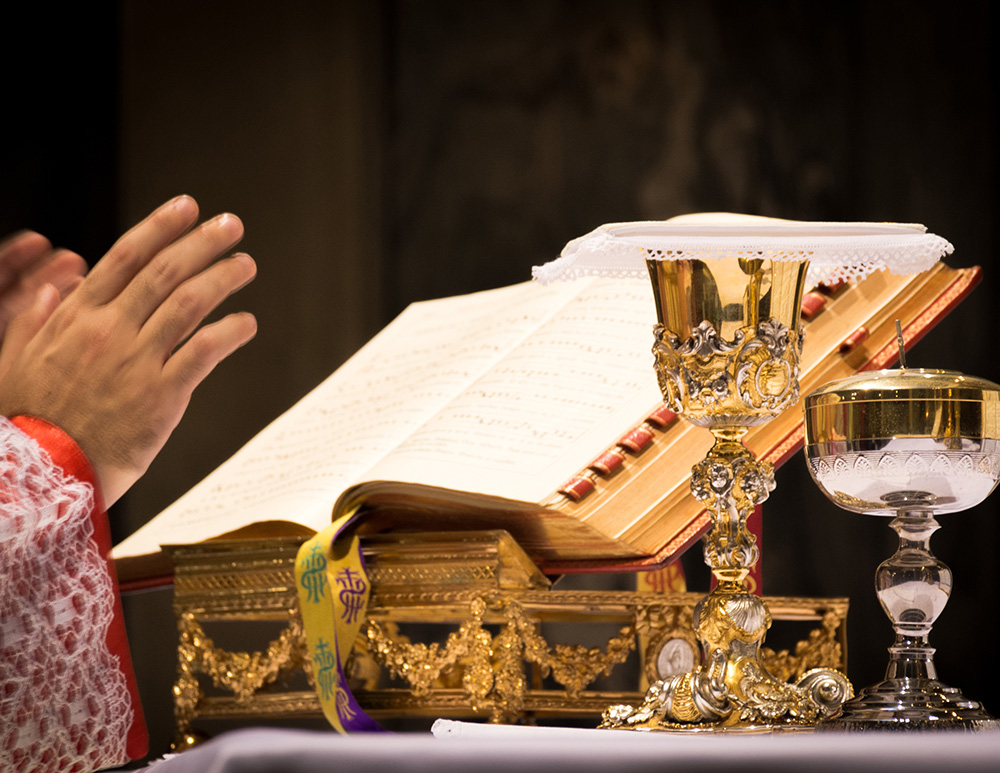 ‘Say the Black, Do the Red’ — Liturgical Abuse and Pastoral Malpractice

COMMENTARY: Liturgical abuses, such as what happened to Father Matthew Hood of Detroit, constitute pastoral malpractice of the worst possible kind. And they are far from uncommon.

Empathy is the capacity to understand what another person is undergoing from within that person’s frame of reference. Much of August I could not help imagining myself in the situation of Father Matthew Hood of the Archdiocese of Detroit.

On Aug. 6, presumably after celebrating Mass on the Feast of the Transfiguration of the Lord, Father Hood’s life was changed far more than the Lord’s appearance on Mount Tabor. He read a news story that the Vatican’s Congregation for the Doctrine of the Faith had declared that the formula “We baptize you in the name of the Father, the Son and the Holy Spirit,” rather than “I baptize you…,” is invalid.

A few months earlier, at the beginning of the COVID-19 shutdown, his father had sent him a video of his and his twin brother’s 1990 baptism, in which he noted that the deacon who had baptized him at St. Athanasius Parish in Troy, Michigan, had used the “we.” Father Hood was concerned enough to reach out to a seminary professor and some canon lawyers to ask whether they thought his baptism — and, therefore, each of his other subsequent sacraments, including his own priestly ordination —was valid. Since the Holy See had never declared such a formula invalid, they responded that the presumption would be that it was valid. The Aug. 6 doctrinal note from Rome made clear that it wasn’t.

In the blink of an eye, Father Hood recognized that not only was he not a priest but not even a Christian. His own baptism, first and subsequent Communions, every confession he made, his confirmation, his diaconal and priestly ordinations were all invalid. To make matters worse —and what troubled his pastoral heart more —was that all the Masses he had celebrated, the confessions he had heard, the anointings he had done (including of his own grandmother on her deathbed), the confirmations of adults he had received into the Church, and most of the weddings he had celebrated since his June 3, 2017 putative priestly ordination, were invalid, too.

This existence-shattering realization — which he called “very sad and very disorienting” — happened not because his parents had done anything wrong: they dutifully and faithfully brought their sons to the Church to be baptized soon after their birth. It happened not because he himself had done anything wrong —in fact, he had sought to follow the Lord with great abandon, saying a whole-hearted yes to what he discerned was a priestly vocation. It happened because a cleric changed a word in the formula of baptism.

The substitution was not an accidental malapropism. Part of the basic instruction that the Church always gives to every young couple preparing for their child’s baptism, and to every child in religious education when the sacrament of baptism is covered, is how to baptize in an emergency: to pour or sprinkle water three times over someone’s head, saying, “I baptize you” followed by “in the name of the Father, and of the Son and of the Holy Spirit.” Three simple words, together with the expression we make with the Sign of the Cross, that accomplish what they say. They’re as much a part of an average Catholic’s vocabulary as the expression, “This is my body.”

Whether the choice to use the formula “we baptize you” was a personal invention on behalf of the deacon involved, or the consequence of abysmal sacramental formation in the diaconal training program and total lack of basic supervision in parish ministry, it was a cataclysmically consequential abuse.

And it wasn’t an isolated case. The Archdiocese of Detroit found out in 1999 that the deacon had been using the formula “we baptize you” since 1986, and instructed him to stop. At the time, the canonists and theologians the archdiocese consulted said that, because of a lack of formal declaration from the Church — and perhaps out of reluctance unnecessarily to upend the lives of 14 years of baptized children and their families if a stricter interpretation of validity were wrong —the obviously illicit baptisms were nevertheless probably valid.

We also know that the deacon by no means was the only cleric to use an invalid formula. In the early 1990s, Cardinal Bernard Law of Boston had to have the Paulist Center next to the Massachusetts State House contact years’ worth of invalidly baptized babies, because the priests at the chapel, thinking that the words “Father” and “Son” were misogynist, took it upon themselves to baptize “in the name of Creator, and the Sanctifier of the Redeemer.” The Vatican’s Congregation for the Doctrine of the Faith in 2008 had to pronounce that such pseudo-sacramental formulae, as well as “in the name of the Creator, of the Liberator, and of the Sustainer,” were invalid. The CDF published its Aug. 6 doctrinal note because it became aware that clerics in some part of the world were using the formula, “In the name of the father and of the mother, of the godfather and of the godmother, of the grandparents, of the family members, of the friends, in the name of the community we baptize you in the name of the Father and of the Son and of the Holy Spirit.”

Such liturgical abuses constitute pastoral malpractice of the worst possible kind, as what has happened in the life of Father Hood, his twin brother, all of the others baptized over 14 years by the deacon, and all those who had gone to gone to Father Hood for Mass, confession, marriage and anointing now make plain.

But the consequences of such liturgical injustice could even be more serious. Imagine, for example, that Pope Francis had been invalidly baptized, making his diaconal, priestly and episcopal ordinations, not to mention his papal election and so many of his papal acts, invalid. Imagine, even worse, that Cardinal Scipione Rebiba (d. 1577), from whom Popes Francis, Benedict XVI, John Paul II and 91 percent of Catholic bishops today trace their apostolic lineage, had been invalidly baptized. It would render invalid almost every bishop today, and all of their priestly ordinations, and most of their own and their priests’ sacramental acts —all because someone decided on his own to change a word in a sacramental formula. And there’s simply no way of knowing when a baby is baptized what that person will become or what the ripple effects will be of liturgical infidelity.

What should be done to try to ensure that no one has to go through what Father Hood, his brother and his parishioners have had to experience?

First, at the level of the ministers, there must be absolute fidelity to the sacramental formulae. Not to do so is the most abhorrent form of pastoral cruelty with massive spiritual consequences.

Liturgical abuses regarding sacramental form are unfortunately not uncommon. Several times a year, I’m approached by various faithful with legitimate doubts about the validity of the Mass they attended or absolution they received. About a month ago, a young religious asked me about a priest who celebrated Mass for her community, who, instead of saying, “This is the Chalice of my Blood,” substituted, “This is the cup of my love.” A laywoman told me that when she went to confession, the priest simply said, “Go. Your sins are forgiven.” She had to beg him to say the essential of the formula of absolution, “I absolve you from your sins in the name of the Father, of the Son and of the Holy Spirit.” In one of the parishes I was assigned, I discovered in the parish registers 35 obviously invalid marriages from the preceding decade.

Seminary formators, vocations directors and bishops can sometimes just presume that all those in seminary and diaconal programs have the desire to do things the way they should, and at a minimum, “say the black and do the red” (faithfully pronouncing the words in the ritual and carrying out the indicated actions). But this intention should be formally made explicit, because every once in a while someone can slip through thinking, oblivious to the consequences, that he has a better way.

Second, there must be much greater supervision, and zero tolerance, on the part of bishops for liturgical misconduct. In some places in the Church, liturgical abuses, small and big, are tolerated and widespread. There needs to be the equivalent of former police commissioner William Bratton’s proven “broken windows” approach to criminality, that if you want to eliminate violent crimes, begin by fixing broken windows, eliminating graffiti and vandalism, and other minor crimes. To eliminate sacrilegious offenses on the part of clergy rendering sacraments invalid, bishops should respond quickly, and never overlook, situations whenever they hear that clerics aren’t doing things by the book.

In Father Hood’s case, the Archdiocese of Detroit, led by Archbishop Allen Vigneron, responded quickly and appropriately, giving him — validly —the sacraments of initiation on Aug. 9, diaconal ordination on Aug/ 15 and priestly ordination on Aug. 17. They also created a website and have been working nonstop to identify those baptized by the deacon or who had received any invalid sacraments by Father Hood to remedy those situations as quickly as possible.

But this whole sacramental catastrophe could have been avoided had the one baptizing only done the exceedingly simple thing of faithfully using the valid words. The Church, out of sincere repentance, must resolve to do everything it can to prevent further such abuses —and innocent victims —in the future.