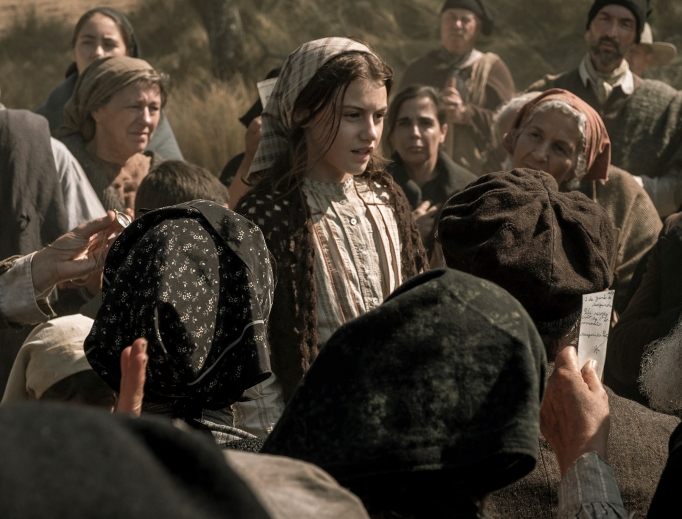 The story of the 20th century’s most celebrated Marian apparitions comes to life in a fine retelling from co-writer and director Marco Pontecorvo and Catholic screenwriter Barbara Nicolosi.

Marco Pontecorvo’sFátimais the first screen version of the Marian apparitions at Fátima and the “Miracle of the Sun” I’ve seen that feels like the characters are living through the story’s events in the present tense.

That’s more than a little ironic, because it’s also the version that most emphatically places those events in the past, almost but not quite presenting them in flashback from the perspective of an aging Sister Lúcia (Brazilian actress Sônia Braga,Aquarius) discussing her experiences with a skeptical professor of religion named Nichols (Harvey Keitel) visiting her at the Carmelite convent in Coimbra, Portugal, in 1989.

The 2009 art-house indieThe 13th Dayoffered a simpler framing device — Sister Lúcia writing her memoirs — but relied on it more extensively, allowing frequent voice-over narration to carry much of the narrative. The 1991 Portuguese docudramaApparitions at Fátima(ApariçãoorApparitionis the Portuguese title) also relied on voice-over, sometimes clumsily.

Neither film was much interested in dramatizing what motivated the adult figures who become effective or formal antagonists to the three visionary children: Lúcia’s disapproving mother; the skeptical parish priest; the anticlerical mayor. Nor was the classic Hollywood version of the story, the 1952 filmThe Miracle of Our Lady of Fatima, which too obviously tried to emulate the crown jewel of Golden Age Hollywood piety,The Song of Bernadette, without matching its depth of humanity or level of craft.

All of these Fátima films emphasized the turmoil in Europe, and in Portugal in particular, at the moment in 1917 when Our Lady appeared, from the horror of the First World War to the oppression of the Church by Portugal’s hardline secular government.

OnlyFátima— written by Barbara Nicolosi, Valerio D’Annunzio and Pontecorvo — captures the sense of life going on at the moment that the three children, 10-year-old Lúcia (Stephanie Gil) and her younger cousins Francisco (Jorge Lamelas) and Jacinta (Alejandra Howard), start to talk about having seen a Lady from heaven at theCova da Iria, the family pastureland where Lúcia watched her family’s flock of sheep.

Above all, there is the grimly regular ritual of residents of Ourém, the municipality where Lúcia’s village of Aljustrel on the outskirts of Fátima is located, gathering to listen in suspense while the mayor (or civil administrator), Artur Santos (Croatian-American actor Goran Višnji?,Beginners), reads the latest list of local soldiers who have been declared dead or missing.

The list is alphabetical, so there are sighs of relief when the first name is uttered that comes after the name one is most hoping not to hear — in the case of Lúcia’s family, that of Lúcia’s brother Manuel. (This is one of the film’s more notable fictionalizations; the relative at war was a cousin of Lúcia, not a brother.)

Filming entirely in Portugal, frequent collaborators Pontecorvo and cinematographer Vincenzo Carpineta (Game of Thrones,Rome) create rich, atmospheric images with a vivid sense of place, from the medieval town center of Ourém — where, incongruously, the mayor holds forth on the triumph of modern secularism over religious superstition — to the rustic houses of Aljustrel and the rugged beauty of theCova da Iria. (The scenes in Ourém were filmed in the central Portuguese town of Tomar, which has a picturesque medieval town center with a Renaissance-era church dedicated to John the Baptist. The stone village of Cidadelhe, also known as Piñel, stands in for Aljustrel.)

When the Lady appears, the transcendent nature of the experience is suggested not with luminous special effects or heraldic scoring but with subjective, impressionistic camerawork and editing.

“She was as real as you are,” Lúcia insists to her mother, and, indeed, Portuguese actress Joana Ribiero, serene and benevolent in elegantly simple white garments, walks barefoot on the earth of theCovaas naturalistically as anyone else.

But our glimpses of her are brief and partial — eyes gazing at the children; hands extended to them, holding a rosary; a trickle of blood on her breast — interspersed with the empty space that others see (including, at first, Francisco, who doesn’t immediately see the Lady and later sees her but doesn’t hear her voice when her lips move).

This approach seems to me more evocative than, say, overly familiar computerized glowy effects that we’ve seen in any number of superhero movies over the last decade or so. No cinematic technique, no human art of any kind, can accurately recreate the transcendence of a religious experience, and the most effective religious art has never aspired to representational exactness.

For the first time in any film I’ve seen, Lúcia’s mother, Maria Rosa (Portuguese singer and actress Lúcia Moniz), is a developed character: devout, with some education, loving and wanting what’s best for her daughter, but understandably upset and angry over what she can only conceive as a startling pretense taken too far. A moment in which Maria defiantly faces down disapproving neighbors movingly shows us for the first time the mother sufferingwithher daughter, rather than being just one more voice against Lúcia.

Artur Santos, the mayor, is cast as a sort of Pilate figure, caught between, on the one hand, pressure from political higher-ups in Lisbon and the consequent need to maintain order and avoid awkward viral religious hysteria and, on the other, the gentle but firm resistance of his Catholic wife, Adelina (Iris Cayatte). (The Santos’ relationship is not entirely unlike that of Pilate and his wife inThe Passion of the Christ, and an expression of solidarity between Santos’ wife and the pious protesters recalls Pilate’s wife bringing linens to the Virgin Mary and Mary Magdalene to wipe Jesus’ blood after the scourging.)

The filmmakers don’t shy from some of the more challenging aspects of the Fátima message, from the emphasis on mortification and the offense given to God by sin to the children’s dreadful visions of war and hell. When Lúcia fears that her brother may have been killed in battle, she spends hours shuffling on her knees in prayer in theCova, trailed by her respectfully concerned father. (The Lady does tell the children, though, not to keep punishing themselves with ropes tied around their waists.)

As the Lady asked a great deal of the three children, Pontecorvo asks a great deal of his young actors; the film rests on their credibility, as the visionaries’ story rested on theirs.

Pontecorvo seems to have a flair for directing children (first seen in his acclaimed feature debutPa-Ra-Da), and Gil as Lúcia especially is thoroughly persuasive both in rapture and in conflicted confusion. Lamelas brings sensitivity to Francisco and Howard charm to Jacinta.

Keitel’s skeptical Professor Nichols is a very rough functional counterpart to Gilbert Roland’s softhearted rogue inThe Miracle of Our Lady of Fatima, a nonbelieving character meant to serve as a point of entry for non-Catholic viewers.

Perhaps surprisingly, the latter-day segments with Sister Lúcia — which would form a framing story, were it not for a prologue-like opening sequence depicting an early apparition (not of the Virgin Mary but of the Guardian Angel of Portugal) and the somewhat abrupt ending in the immediate aftermath of the “Miracle of the Sun” — wind up being the film’s weakest links.

Keitel and Braga are a pleasure to watch, but Nichols’ line of questioning is too often more sophomoric (or village atheist) than professorial. (If the nails through Christ’s hands would actually have been set in the wrists, does that mean that God deliberately chose the “wrong” location for stigmata?)

If there’s any reason for the latter-day storyline to be set in 1989 — any relevance of the events at Fátima to that moment toward the end of the 20th century, and perhaps by extension any resonance with our own historical moment — it doesn’t come out. (The filmmakers couldn’t have known at the time production wrapped thatFátimawould debut in the midst of a global pandemic, eerily resonating with the 1918 Spanish flu pandemic in which young Francisco and Jacinta died shortly after these events.)

This lapse not only leaves their dialogue more static than it might have been, it also leaves the “Miracle of the Sun” as the last sequence, without any reflection or perspective except what can be provided by closing titles.

Those issues aside,Fátimais easily the most compelling dramatization of the Fátima story to date and fills a long-felt need in the world of religious cinema. It’s sturdy enough to hold up to periodic rewatchings, for example on May 13, the feast day of Our Lady of Fátima.

Who is Chen Guangcheng? Chinese hu...