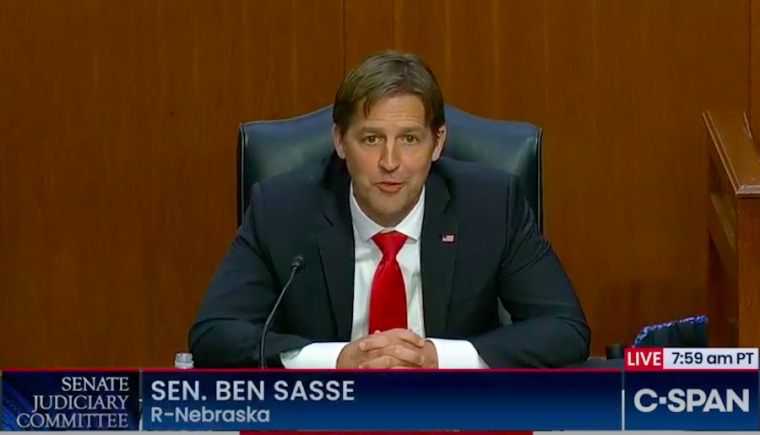 Sasse stressed the importance of religious freedom as one of the five “basic pre-governmental rights” enshrined in the First Amendment to the Constitution.

For this reason, he continued, the Constitution prohibits religious tests for government positions.

Barrett, a judge on the Seventh Circuit appeals court and a Catholic mother of seven, has come under scrutiny in the press and by Democratic senators for her Catholic faith and membership in the ecumenical group People of Praise.

Some reports suggested or alleged a connection between the group, its discontinued use of the term “handmaiden,” and the 1985 dystopian novel and later TV series “The Handmaid’s Tale.” The claim was later corrected by several major publications.

In 2017, during Barrett’s confirmation hearings for the appeals court, Sen. Dianne Feinstein (D-Calif.) told Barrett, “[W]hen you read your speeches, the conclusion one draws is that the dogma lives loudly within you. And that’s of concern.” The senator accused Barrett of having “a long history of believing that your religious beliefs should prevail” over the law.

Some Democratic senators have continued to warn that Barrett’s Catholic beliefs in issues such as abortion and assisted reproductive technology could influence her decision-making on the bench.

In his opening statement, Sasse harshly criticized what he described as problematic lines of questioning, saying, “There are places where this committee has acted like it’s the job of the committee to delve into people’s religious communities. That’s nuts. That’s a violation of our basic civics.”

Sasse noted that Supreme Court justices Ruth Bader Ginsburg and Antonin Scalia were both able to receive upwards of 90 votes at their confirmation hearing in the Senate, despite their vastly different approaches to law.

“I think some of what happened between then and now is we decided to forget what civics are and allow politics to swallow everything.”

He stressed the importance of distinguishing between politics – the “less important stuff we differ about” – and civics, the “stuff we’re all supposed to agree on, regardless of our policy view differences.”

“Civics is another way we talk about the rules of the road,” Sasse said. “Civics 101 is the stuff like Congress writes laws, the executive branch enforces laws, courts apply them. None of that stuff should be different if you’re a Republican or a Democrat or a Libertarian or a Green party member.”

While the basics of civics provide the stable framework for the American constitutional system, politics is a term for the disagreements about specific policies and approaches within that framework, the senator said, pointing to differing views on finance committee bills as an example.

Recognizing the difference between civics and politics is important in the confirmation hearing of a Supreme Court justice, Sasse said, because it reminds Americans that a judge is not a “super legislator.”

With a clear civics-based understanding of the role of judges, Sasse said, Americans should reject judicial activism, the idea that judges should advance policies to shape society through their decisions.

“This is the confused idea that the Supreme Court is just another arena for politics,” the senator said.

Seeing the court through this lens of judicial activism, Sasse said, reduces the judiciary to progressive or conservative blocs rather than recognizing the fundamental and unique role they play in the American constitutional system.

“When we have a nominee before us, we should be asking her questions that are not about trying to predetermine how certain cases will be judged,” he added.

Mother Cabrini gets a new statue i...