Shrine in memory of aborted children dedicated in Mexico 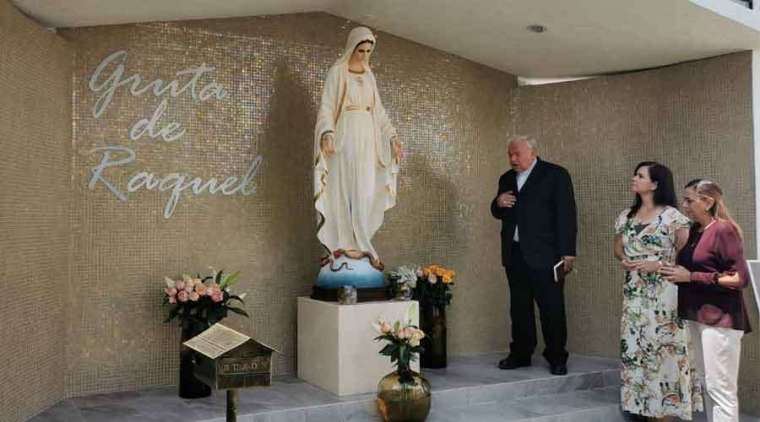 Shrine in memory of aborted children dedicated in Mexico

The Mexican pro-life association Los Inocentes de María (Mary’s Innocent Ones) dedicated a shrine in Guadalajara last month in memory of aborted children. The shrine, called Rachel’s Grotto, also serves as a place for reconciliation between parents and their deceased babies.

In an August 15 dedication ceremony, the archbishop emeritus of Guadalajara, Cardinal Juan Sandoval Íñiguez, blessed the shrine and emphasized the importance of promoting “awareness that abortion is a terrible crime that frustrates the destiny of many human beings.”

Speaking with ACI Prensa, CNA’s Spanish language news partner, Brenda del Río, the founder and director of Los Inocentes de María, explained that the idea was inspired by a similar project by a choral group that created a grotto next to the adoration chapel of a monastery in Frauenberg, southern Germany.

The name “Rachel’s Grotto comes from the passage in the Gospel of Matthew where King Herod, seeking to kill the Christ Child, massacres all children two years and younger in Bethlehem: “A cry was heard in Ramah, sobbing and loud lamentation; Rachel weeping for her children, and she would not be consoled, since they were no more.”

The main goal of Los Inocentes de María, Del Río said, “is to combat violence against children, both in the womb and in early childhood, newborns and up to two, five, six years old, when lamentably many are murdered,” some are even “thrown into sewers, onto vacant lots.”

So far the association has buried 267 preborn children, newborns and infants.

The shrine is part of a project by the association to make the first cemetery for aborted babies in Latin America.

Parents can give their child a name, handwriting it on a small piece of paper to be transcribed on a clear plastic tile placed on the walls next to the shrine.

“These acrylic tiles will be attached to the walls, with all the children’s names,” she said, and “there is a small mailbox for the father or mother to leave a letter for their child.”

For Del Río, the impact of abortion in Mexico extends to the country’s high rate of murders, disappearances, and human trafficking.

“That is contempt for human life. The more abortion is promoted, the more the human person, human life, is despised,” she said.

“If we Catholics do nothing in the face of such a terrible evil, a genocide, then who will speak? Will the stones speak if we keep silent?” she asked.

Del Río explained that the Inocentes de María project goes into marginalized and crime-ridden areas, looking for pregnant women and new mothers. They offer workshops for these women in local Catholic churches, teaching them about human dignity and development in the womb.

“We’re sure, men and women alike – because we also have men here with us helping out – that we’re saving lives with these workshops. Telling them, ‘Your baby is not your enemy, it’s not your problem,’ is to restore a whole life,” the association director said.

For Del Río, if babies from a young age receive from their mothers “the message that they are valuable, precious, a work of God, unique and unrepeatable,” then in Mexico “we will have less violence, because a child who is hurting, we tell the moms, is a child who will end up on the streets and in prison.”

At Los Inocentes de María, she said, they tell the parents who have had an abortion and are seeking reconciliation with God and their children, that “you are going to meet your children the moment you die, radiant, beautiful, splendid, that they are going to come to welcome you at the gates of Heaven.”