Sign of a Bad Omen? Blood of St. Januarius Fails to Liquify During Annual Dec. 16 Ritual 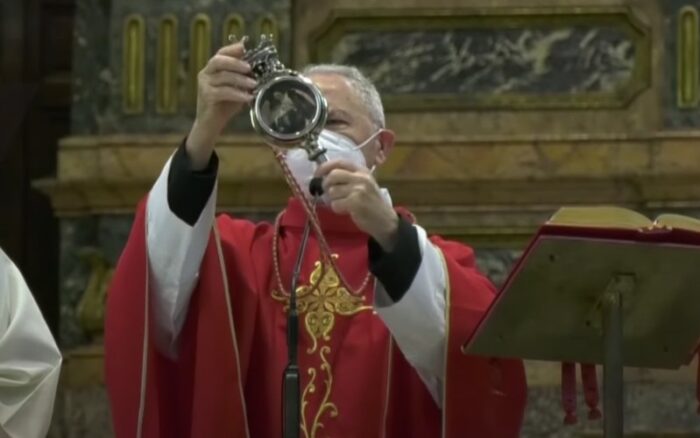 Sign of a Bad Omen? Blood of St. Januarius Fails to Liquify During Annual Dec. 16 Ritual

The liquefaction miracle of St. Januarius’ blood typically occurs three times per year at the Cathedral of Naples in Italy: the first Sunday of May (the celebration of his relics arriving at the Cathedral) on the saint’s Sept. 19 feast, and on Dec. 16, the anniversary of Naples’ preservation from the 1631 Mount Vesuvius eruption.

St. Januarius was a third century bishop known for his bravery in defending his flock and was martyred during the reign of Emperor Diocletian. He is the patron saint of Naples, Italy.

A small bit of his blood preserved in a vial in the Cathedral in Naples. The miraculous liquefaction first occurred in 1389.

The blood remained solid and did not liquefy on this year’s Dec. 16 anniversary, but did liquify in May and on Sept. 19, 2020.

After Wednesday’s 9 a.m. Mass, Abbot of Naples’ Chapel of San Januarius Fr. Vincenzo De Gregorio said “when we took the reliquary from the safe, the blood was absolutely solid and remains absolutely solid.”

However, Vatican journalist Francesco Antonio Grana told Catholic News Agency that the liquefaction rarely occurs on Dec. 16 and the number “can be counted on one hand” within the last 34 years. The blood also did not liquify in Dec. 2016.

The Church does not officially recognize the phenomenon, but local people consider it a “good sign” for the city.

Many people believe that when the liquefaction does not occur, it indicates an upcoming catastrophe. Some historical facts contribute to this fear.

Pray for God’s mercy upon the world!

Hungary defines family as having a...

Why (and How) Moral Goodness Is Ma...