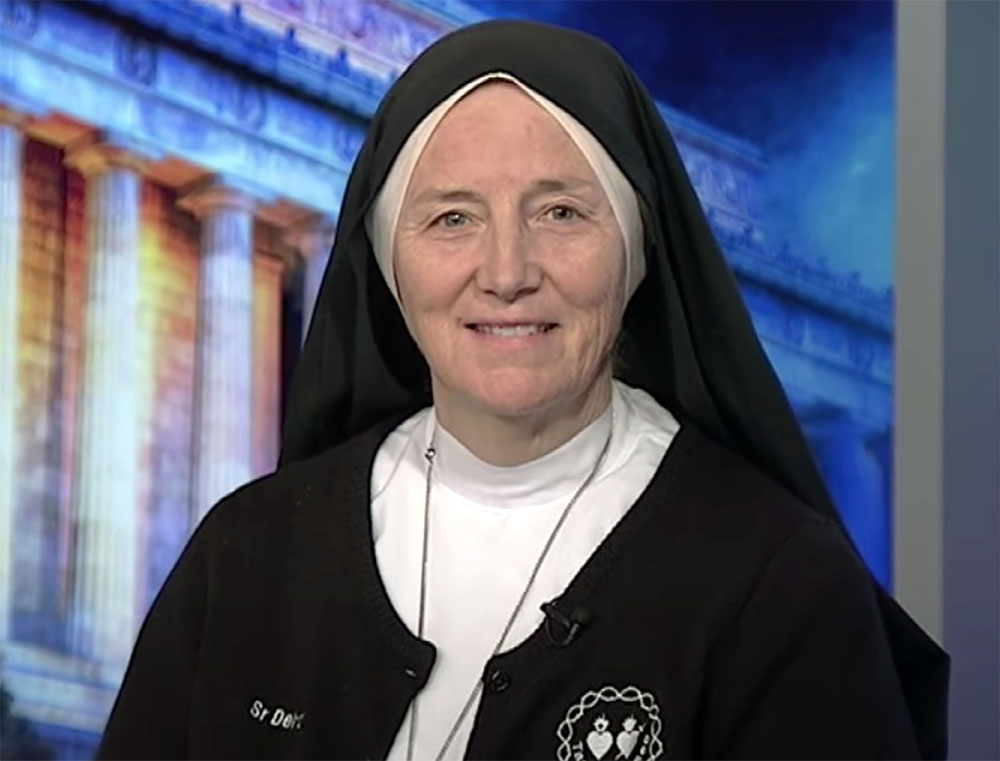 Editor’s Note: This article originally appeared July 7, 2019, at the Register, with the headline, “Trump Just Gave a Shoutout to Sister Deirdre Byrne. Who is She?” It is being reprinted here after the announcement of Sister Dede’s selection to address the Republican National Convention on Aug. 26.

One of the heartwarming features of President Trump’s address at the “Salute to America” July 4, 2019, was his tributes to citizens, past and present, who by their service have helped to make America a better place. He praised Clara Barton, who founded the American Red Cross in 1881. He thanked Tina “Angel” Belcher, known as “Ms. Angel” to the people she serves, for generously volunteering during Hurricane Michael and in the years that followed. He praised “the heroes that serve our communities,” including “firefighters, first responders, police, sheriffs, ICE, Border Patrol, and the brave men and women of law enforcement.”

But the name that caught my attention was Sister Deirdre Byrne. Sister Deirdre (or “Dede,” as she is called by her friends) is a medical doctor whose long career has been marked by extraordinary service. She served in the U.S. Army Medical Corps, in active duty in Afghanistan and later as a reservist, eventually rising to the rank of colonel. She served for 13 months in Egypt’s Sinai Peninsula. As a missionary surgeon, she devoted herself to helping the sick in Kenya, Haiti, Sudan and Iraq.

Sometimes her medical skills opened doors for her to meet Catholic leaders who helped to influence her vocation. When Cardinal James Hickey, Archbishop of Washington, had open-heart surgery in 1996, it was Deirdre who cared for him during his post-op period. And in 1997, as a senior resident, she delivered medical care to Mother Teresa during the missionary’s five-day visit to Washington, D.C.

Sister Deirdre’s accomplishments don’t end there. As a young doctor in New York on Sept. 11, 2001, after the planes flew into the World Trade Center, she and her friend made their way to Ground Zero, then spent the next two days delivering supplies and support to firefighters.

She was board certified in family medicine and general surgery. She has earned the title of Fellow in the American College of Surgeons.

A Call to Serve in Another Way

But while serving as a medical officer was rewarding, Deirdre felt called to serve God in yet another way. After a period of discernment, she entered the Little Workers of the Sacred Hearts of Jesus and Mary, a traditional religious order whose life is centered on prayer and Eucharistic adoration. Founded in Italy, the order attracts teachers and health care professionals to their mission of service. Sister Deirdre had found her way home! She entered the community in 2002 and professed her first vows in 2004.

Sister Deirdre talked with the Register about the experience of attending the “Salute to America” at the Lincoln Memorial. “I don’t know how I was selected,” she admitted. “The President already had this idea of who he wanted to honor.” She speculated that President Trump may have learned about her service through someone who knew her youngest brother, FatherBill Byrne, a Catholic priest in the Archdiocese of Washington.

She insisted that despite the President’s kind words, she wasn’t the real hero. “I was sitting around some real heroes!” she said. Among the honorees seated near Sister Deirdre in the stands was an older man who received a medal for his heroism in Japan, a Navy Seal who rescued a doctor in Afghanistan, a serviceman who had been involved in the bombing at Fallujah, Iraq. “They are the people I get to help take care of,” she said. She is able to sleep at night because they arenotsleeping at night —they are on watch, looking out for the bad guys.

Asked what she does now, Sister Deirdre explained, “I am a general surgeon. I do free surgery for the poor and refugees.” She works through Sibley Hospital, a nonprofit hospital (managed by Johns Hopkins) in the Palisades neighborhood of Washington, D.C. In the District of Columbia, hospitals are required by law to perform a certain number of surgeries for uninsured and low-income patients,but in the wealthy community in which the hospital is located, there are few homeless or indigent patients. Sibley Hospital turned to the Little Workers of the Sacred Hearts, inviting them to perform surgery in the hospital at no cost; so the Sisters have been able to offer free or low-cost services to indigent patients.

Sister Deirdre, now over 60, has had to simplify her schedule to balance her responsibilities. In her younger years, she performed a wide range of surgeries,but today she has additional commitments as head of the household of religious, and so she restricts her medical work to outpatient surgeries (gall bladder, hernia, and sometimes thyroid surgeries). In years past, she served with the U.S. Military in Sudan; but that requires a two-month commitment, and while she still travels overseas two or three times a year, she helps instead in Haiti. She is a board member of Archangel Airborne, a nonprofit humanitarian special operations organization that brings together nurses, doctors and airline pilots to serve men, women and children living in conditions of extreme poverty and situations of disaster, social injustice and oppression.

Asked if she had a message for readers of the National Catholic Register, Sister Deirdre quoted what Mother Teresa had once told her: “Keep your eyes on the Cross.”

“In every way,” said Sister Deirdre, “and in every part of your life, embrace all that comes your way and embrace Our Lord on the Cross.” She shared her personal mantra, which is especially relevant for young people: Life is not as complicated as I think it is. We have only two goals:

To do all we can to keep in the state of grace. As Catholics, that means participating in confession, Holy Communion and, if possible, adoration.
Bring as many with you as you can. That means telling the truth to people, even when it’s difficult.

“So when I am in the clinic with a patient who cohabits or who uses contraception,” she explained, “I try to talk honestly with that person about God’s will.” Sister Deirdre tries to be positive in her conversations with her patients, but she will often remind a person before surgery that he or she is about to undergo anesthesia —and that while they expect a full recovery, there is a small chance of death, and a chance that the patient will find himself or herself standing before God. “You ought to reconsider your life,” she warns, “as far as those habits.” Her patients, she reports, tend to take her admonition and are not offended. “I’m not saying that because I’m judging,” she explains, “I am saying that because I love them.”

Saving the Unborn and Their Mothers

Another area in which Sister Deirdre has enjoyed success in her medical clinic is with abortion reversal. She helps women who have taken the abortion pill, but who regret that action. If they come to her within 72 hours of taking the pill, she can take action to reverse the pill’s trajectory and potentially save the life of the developing child. Sister Deirdre reports that she has an ultrasound machine in her convent, and that using available medical technology, they are able to save about 50% of the babies whose mothers come to the clinic for help in reversing the abortion. Sister Deirdre is optimistic as she discusses her team’s efforts, quoting Mother Teresa who said simply, “One baby at a time.”

Sister Deirdre explained that she tries to comfort the pregnant women, assuring them that regardless of the outcome as the clinic attempts to save their child’s life, Jesus is very pleased with what they are doing now. “No matter what happens,” she says, “if you baby dies or if your baby survives,” Christ is pleased with the attempt to save the child.

Often, patients who are expecting have visited Planned Parenthood, where they have been told that the pregnancy is “just a clump of cells.” They’re told that “You’re black, you’re unmarried, you need the money. You need to kill your baby.” It’s not unusual, Sister Deirdre said, for a woman to tell her that she walked into the Planned Parenthood office pro-choice and left pro-life, because of the unkind treatment she received there.