Some Catholic Colleges Go Online While Others Stay in Person 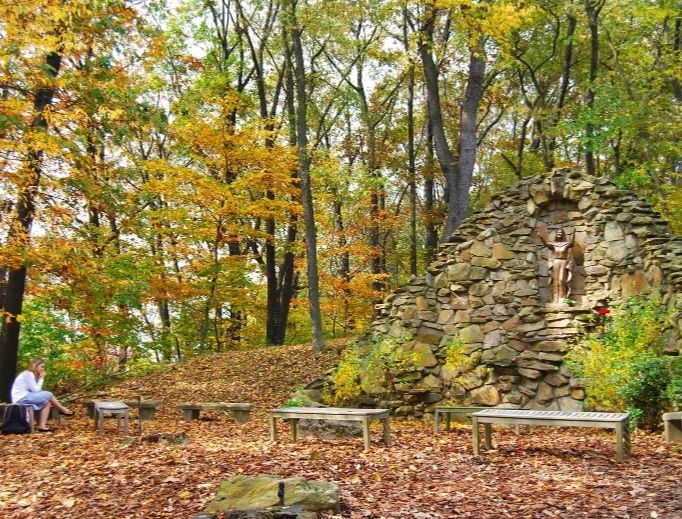 Some Catholic Colleges Go Online While Others Stay in Person

Higher education looks different this fall due to the COVID-19 pandemic.

As schools reopen this fall, some Catholic colleges are shifting to online courses due to the coronavirus pandemic, accelerating a trend toward digital learning even as many institutions remained committed to the value of in-person instruction.

This fall, The Catholic University of America’s undergraduate classes will be all online except for freshmen and a few other exceptions.

“I understand this is disappointing news, because it is disappointing to us.But the large and sustained increase in infections nationwide poses a serious risk that we will be unable to provide the care necessary for a full complement of our student population,” President John Garvey announced in aJuly 31 letterto students and their parents.

But Catholic higher education is no stranger to online learning. Catholic Distance University (CDU) has been providing this kind of alternative platform for learning for the past two decades. Several other prominent institutions have established firm footholds in the digital arena, as well, such as Holy Apostles College and Seminary in Cromwell, Connecticut, and the Franciscan University of Steubenville, Ohio, at the graduate level.

But now, amid the COVID-19 pandemic, other schools are either venturing online for the first time or expanding their existing digital footprint.

Most of them seem to be doing some hybrid of online and in-person classes. St. Thomas University in Houston, for example, is starting off the semester online and then moving to in-person instruction. St. Louis University has given its students a choice between returning to a campus of reconfigured classrooms and lower-density dorms, or studying completely online.

Loyola University in Chicago is holding a phased reopening mirrored after the city’s and Illinois’s graduated approached. Currently, classes are online, with classes meeting in person only“where instruction cannot be replicated in an online environment.” Loyola will resume regular classes only when a vaccine is developed or there is an effective therapeutic treatment for COVID-19.

As more universities make the online move, some students are opting to study at places already experienced in the medium such as CDU. This fall, CDU has seen its enrollment numbers rise. CDU’s communications director Mary Kate White said the school’s experience “gives us an edge.” She also noted that the school was recently accredited by the Association of Theological Schools, which she said handles the accreditations for most Catholic seminaries in North America.

As of Aug. 24, CDU’s fall graduate enrollment is up 20% over last fall, while undergraduate numbers increased by 5%. Overall, applications increased 22% this year, according to White.

Franciscan University is also extending its digital reach, launching five new bachelor degrees this fall that will be completely online. The university had been planning them before COVID-19 hit, but the onset of the pandemic prompted officials to speed up the timeline, according to Joel Recznik, the vice president of enrollment management at the university.

“We made the decision that the best thing we could do to serve students would be to launch these five programs this fall instead of rolling them out over a two- to three-year period,” Recznik said.

The five new online undergraduate degrees are Bachelors of Arts in catechetics, psychology, theology and philosophy and a Bachelor of Science in management. The university expects 100 students to be in the new bachelor’s programs, which Recznik noted was a positive response, given that they weren’t announced until June and that there had been no time to advertise them.

Steubenville already has a vibrant online graduate program with degrees in theology, catechetics, business and education. That program drew 600 students last year, three times the size of in-person enrollment — and it’s expected to pull in an additional 100 graduate students this fall.

“We’ve been in the online arena for 10 years, when we launched our first online master’s degree, and we believe that we’ve gotten it to a point where we understand the students and online learning, that we’re really prepared to serve undergraduates in the same way,” Recznik said.

In addition to the digital classroom, the university encourages graduate students to become involved in their local parish. The school also has assigned a chaplain for online students and maintains Facebook groups where they can discussion personal matters and exchange prayer requests. Recznik said the school will take similar measures to ensure undergraduates students are connected to each other online.

This fall, some students are opting for online classes because of COVID-19. Over the long term, the program is aimed at two distinct demographic groups. One is traditional learners who can be older and want to finish their undergraduate degrees or just learn more about their faith without receiving a formal degree. These students range in age from their 20s to 70s.

But there is a second group Steubenville is eyeing: growing numbers of high-school seniors who are approaching college in a different way in a digital world. “These are digital natives,” Recznik said. “So this is second nature to them.”

Despite the new venture, the in-person ungraduated enrollment is expected to grow by about 200 students to 2,250 this year, including part-timers. The university’s decision to cover all tuition for new students, after accounting for grants and scholarships, helped boost the numbers. “We knew COVID was really impacting families negatively in many different ways, financially being one of them, and we wanted to help,” Recznik said.

However, not everyone is going digital. Some smaller Catholic colleges have decided they can safely return to regular classes this fall. One is Thomas Aquinas College, whose main campus in California is largely self-contained, surrounded by the foothills of the Los Padres National Forest.

Another rural college ducking the digital trend is Christendom College. On the map it’s just under an hour and a half away from the nation’s capital, but the college’s location in rural Virginia next to the Shenandoah National Park and the George Washington National Forest make it seem far more remote.

“Christendom is blessed to be a small, residential College in a rural setting, with less than 500 students living on campus,” Timothy O’Donnell, the college president, told the Register. “In light of these realities, we are moving forward with reasonable modifications for the good of our particular community. Our liberal arts education is bolstered and supported by a robust faith environment and critically important social formation. I am confident that we can focus on the well-being of our community members while still living out our educational apostolate in a full way.”