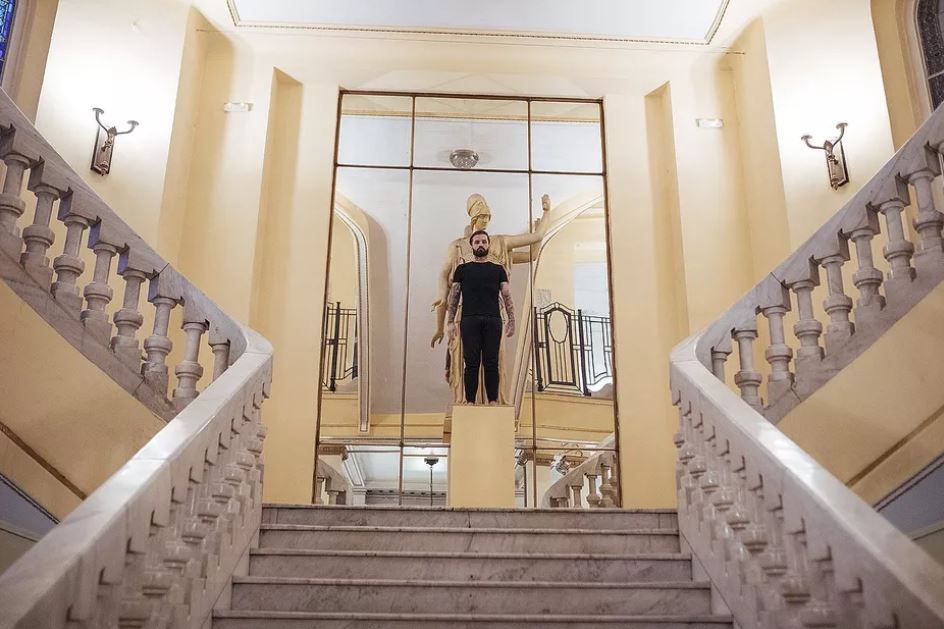 The case, triggered by a controversial government-supported art performance that utilized stolen consecrated hosts, is now before the European Court of Human Rights.

ROME — A Spanish association of Christian lawyers recently submitted a complaint of anti-Catholicism against the Spanish government at the European Court for Human Rights (ECHR) over a highly controversial art performance involving stolen consecrated hosts in the Spanish city of Pamplona in 2015.

The exhibition quickly became an affair of state and divided society. Thewaveofpublic demonstrations, reparation Masses andpetitionscalling for the closure of the exhibition revealed the impact that such a scandal — now known as the “Hosts Case” — had on the population, and especially on the Catholic faithful.

The “Hosts” performance, which ostensibly sought to denounce pedophilia within the Catholic Church, was the creation of Spanish artist Abel Azcona, whostole242 hosts, one by one, over a period of time, by pretending to receive Holy Communion. Instead of consuming the consecrated hosts, he used them to write the wordpederastia(“pederasty”) on the floor. Azcona, a baptized Catholic, then posed naked next to it, with black wings tattooed on his back.

The photographs of the display subsequently gave rise to an exhibition called “Amén” in a city-owned deconsecrated church of Pamplona, and later in other Spanish cities. Pictures and videosshowingthe reactions of clergymen and faithful to the performance were also published by Azcona on social media.

Eventually, the pictures were sold for more than $300,000 and the stolen hosts are, to this day, still subject toexhibitionsin Spanish galleries.

After the first exhibition in 2015,Abocados Cristianos(AC), a Spanish association of Christian lawyers founded in 2008, and the Archdiocese of Pamplona promptly reacted by lodging a complaint against the artist and against the city of Pamplona for hosting the event in a public location and for promoting it with taxpayers’ money. Their complaints were subsequently rejected three times — in the original suit in 2016; on appeal in April 2017; and by the country’s Constitutional Court in November 2017.

For AC members, however, the case is far from being over. Determined to obtain justice for what they consider to be the most serious attack in recent decades on Catholics in the country, the AC made anapplicationto the European Court for Human Rights (ECHR) against the Spanish State. In 2019 the court accepted to hear the case in 2019, and its decision should be issued in the coming months.

“The judges in charge of hearing the case in Spain belonged to a leftist association named ‘Judges for Democracy’ who are known to support attacks on religious freedom,” AC spokeswoman Polonia Castellanos told the Register. “Spanish justice has mocked Catholics and we will not allow it, otherwise the attacks and desecrations will continue and become more and more serious.”

The plaintiffs focused their legal argumentation, filed to the Court in June 2020, on the violation of religious freedom, protected by article 9 of theEuropean Convention on Human Rights.

The second violation of religious freedom, Bauer said, is the fact that public authorities funded and promoted the exhibition, making public property available for free, thereby overriding their duty of neutrality and impartiality in religious matters.

“Our goal here is to determine the role of the state in such a case and its condemnation could put some healthy limits to freedom of speech with regard to anti-religious hatred,” Bauer said. “Even if we totally support the right to criticize religions, to debate and even to provoke the faithful, we question the right to lynch an entire community of believers by publicly humiliating and offending them.”

Such a view is shared by the AC group of Christian lawyers, which sees a real threat to the Spanish faithful’s safety looming on the horizon. For Polonia Castellanos, in fact, the government’s refusal to condemn this kind of anti-Catholic act sends the message that any attack against them will go unpunished. “What is at stake for us here is freedom and security, the fact that we Catholics can go to Mass and to our celebrations safely, without having the feeling that the simple fact to be Catholics exposes us to thefts, attacks and insults,” she said.

As Castellanos highlighted, AC also hopes that, as the case proceeds, the ECHR judges in Strasbourg will recognize a principle of equity between Christians and other religious communities rather than apply a double standard — one for Christians and another for other faiths. In 2018, for instance, the ECHR ruled tocondemnan Austrian woman who called Prophet Muhammed a pedophile. Castellanos hopes that the ECHR will take this case into consideration as they proceed with the Hosts case.

The Polish government adopted a similar stance by pointing out article 14 of the European Convention against discrimination. In itsobservationson the case, the intervening government claims that the respondent state should prove that it would have acted in the same way if the targeted community was from another religion.

While mentioning the currentincreasein anti-Christian acts in Spain, the Polish government representative argued that the state “should not organize or support events that are obviously offensive to a part of society and which do not serve public debate.” He also recalled the “centuries-old” Christian tradition of the Region of Navarre, where the offensive artwork took place, adding that “religious feelings are fundamental values for everyone as they determine personal identity and affect every sphere of human life.”

This clear reminder from Poland to Spain is not insignificant. Indeed, while in itsobservationsto the court, the Spanish government presented itself as a defender of the “right to irreverence,” the Polish government seemed to stand as a protector of Christian Europe.

“The two countries’ observations are symptomatic of the current division between Eastern and Western Europe,” Nicolas Bauer told the Register, noting that it is very unusual for a government to intervene as a third party against another state at a European level. Usually, a state would generally intervene in defense of another state because of their mutual policy or legislation, or to defend its citizens.

“Spain is currently one of the most secularized states of Western Europe and Poland, without having any direct interest in the case, has intervened because Christians and Jesus Christ himself were involved,” Bauer said. “It clearly appears that there is a desire on the part of Poland to defend a Christian perception of freedom for Europe, as well as a certain vision of the law with respect to tradition and religion.”