St. Andrew the Apostle: 11 things to know and share 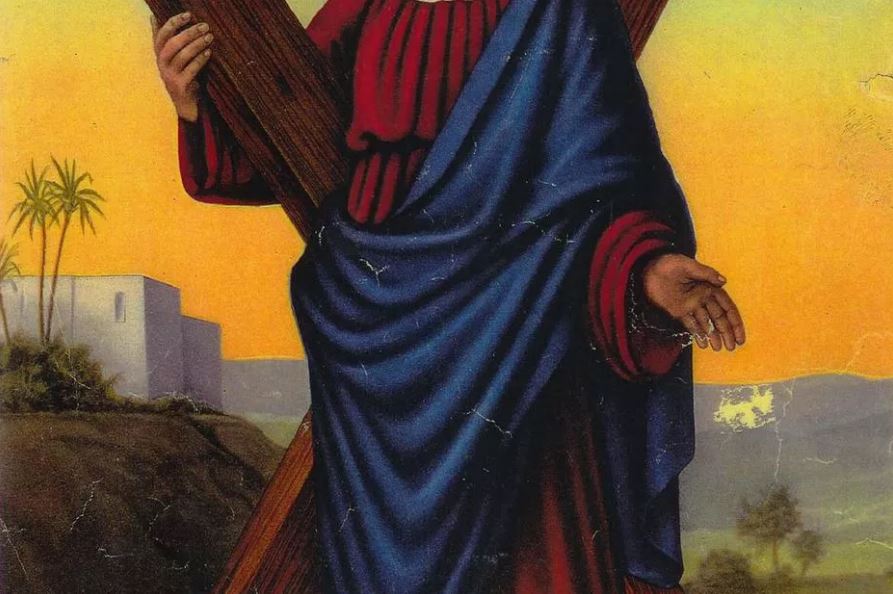 St. Andrew the Apostle: 11 things to know and share

Saturday is the feast of St. Andrew. Here are 11 things to know and share . . . (photo: Register Files)

St. Andrew was one of Jesus’ closest disciples, but many people know little about him.

The feast of St. Andrew is November 30th.

He was the brother of St. Peter, who was also known as Simon bar-Jonah.

He and Andrew shared the same father, so the latter would have been known as Andrew bar-Jonah.

Andrew is regularly mentioned after Simon Peter, which suggests that he was Peter’s younger brother.

Like his brother Peter, and their partners James and John, Andrew was initially a fisherman on the Sea of Galilee.

2) What is significant about his name?

The name Andrew (Greek, Andreas) is related to the Greek word for “man” (Aner, or, in the genitive, Andros). It originally meant something like “Manly,” expressing the parents’ hopes for their baby boy.

It is interesting that Andrew’s name is of Greek origin, not Aramaic. Pope Benedict XVI commented:

The first striking characteristic of Andrew is his name: It is not Hebrew, as might have been expected, but Greek, indicative of a certain cultural openness in his family that cannot be ignored. We are in Galilee, where the Greek language and culture are quite present [General Audience, June 14, 2006].

The fact that their father—Jonah (or Jonas)—gave his elder son (Simon) an Aramaic name and his younger son (Andrew) a Greek name reflects the mixed Jewish-Gentile environment of Galilee.

3) How close was Andrew to Jesus?

In the synoptic Gospels and Acts, the twelve apostles are always listed in three group of four individuals. The first of these groups indicates those who were the closest to Jesus. It includes the two pairs of brothers: (1) Peter and Andrew, the sons of Jonah, and (2) James and John, the sons of Zebedee.

Andrew was thus one of the four disciples closest to Jesus, but he seems to have been the least close of the four.

This is reflected in the fact that, several times, Peter, James, and John seem to have privileged access to Jesus, while Andrew is not present.

For example, Peter, James, and John were those present for the Transfiguration, but Andrew was not present. They were the closest three, while Andrew was a distant fourth.

4) Why is it ironic that Andrew would be more distant?

Because he was one of the first followers of Jesus. In fact, he discovered Jesus before his brother Peter did.

Indeed, he was one of the two initial disciples of John the Baptist who encountered Jesus at the beginning of John’s Gospel.

Because he followed Jesus before St. Peter and the others, he is called the Protoklete or “First Called” apostle.

He was truly a man of faith and hope; and one day he heard John the Baptist proclaiming Jesus as: “the Lamb of God” (Jn 1: 36); so he was stirred, and with another unnamed disciple followed Jesus, the one whom John had called “the Lamb of God”. The Evangelist says that “they saw where he was staying; and they stayed with him that day…” (Jn 1: 37-39).

Thus, Andrew enjoyed precious moments of intimacy with Jesus. The account continues with one important annotation: “One of the two who heard John speak, and followed him, was Andrew, Simon Peter’s brother. He first found his brother Simon, and said to him, “We have found the Messiah’ (which means Christ). He brought him to Jesus” (Jn 1: 40-43), straightaway showing an unusual apostolic spirit.https://db3d9ed588a82208220e2c432ef0e581.safeframe.googlesyndication.com/safeframe/1-0-37/html/container.html

Andrew, then, was the first of the Apostles to be called to follow Jesus. Exactly for this reason the liturgy of the Byzantine Church honours him with the nickname: “Protokletos” [protoclete], which means, precisely, “the first called”.

5) What do the Gospels reveal to us about St. Andrew?

There are three notable incidents. The first occurs when Jesus performs the multiplication of loaves. Pope Benedict notes:

The Gospel traditions mention Andrew’s name in particular on another three occasions that tell us something more about this man. The first is that of the multiplication of the loaves in Galilee. On that occasion, it was Andrew who pointed out to Jesus the presence of a young boy who had with him five barley loaves and two fish: not much, he remarked, for the multitudes who had gathered in that place (cf. Jn 6: 8-9).

In this case, it is worth highlighting Andrew’s realism. He noticed the boy, that is, he had already asked the question: “but what good is that for so many?” (ibid.), and recognized the insufficiency of his minimal resources. Jesus, however, knew how to make them sufficient for the multitude of people who had come to hear him.

6) When else does Andrew come to the forefront?

A second instance is when he and the other core disciples question Jesus about his statement that the beautiful stones of the temple will be torn down.

The second occasion was at Jerusalem. As he left the city, a disciple drew Jesus’ attention to the sight of the massive walls that supported the Temple. The Teacher’s response was surprising: he said that of those walls not one stone would be left upon another. Then Andrew, together with Peter, James and John, questioned him: “Tell us, when will this be, and what will be the sign when these things are all to be accomplished?” (Mk 13: 1-4).

In answer to this question Jesus gave an important discourse on the destruction of Jerusalem and on the end of the world, in which he asked his disciples to be wise in interpreting the signs of the times and to be constantly on their guard.https://db3d9ed588a82208220e2c432ef0e581.safeframe.googlesyndication.com/safeframe/1-0-37/html/container.html

From this event we can deduce that we should not be afraid to ask Jesus questions but at the same time that we must be ready to accept even the surprising and difficult teachings that he offers us.

7) Is there a third instance in which the Gospels reveal St. Andrew’s importance?

In a third instance, St. Andrew—with his Greek name—serves as a bridge between Jewish and Gentile followers of Jesus. Pope Benedict explains:

Lastly, a third initiative of Andrew is recorded in the Gospels: the scene is still Jerusalem, shortly before the Passion. For the Feast of the Passover, John recounts, some Greeks had come to the city, probably proselytes or God-fearing men who had come up to worship the God of Israel at the Passover Feast. Andrew and Philip, the two Apostles with Greek names, served as interpreters and mediators of this small group of Greeks with Jesus.

The Lord’s answer to their question – as so often in John’s Gospel – appears enigmatic, but precisely in this way proves full of meaning. Jesus said to the two disciples and, through them, to the Greek world: “The hour has come for the Son of man to be glorified. I solemnly assure you, unless a grain of wheat falls to the earth and dies, it remains just a grain of wheat; but if it dies, it produces much fruit” (12: 23-24).

Jesus wants to say: Yes, my meeting with the Greeks will take place, but not as a simple, brief conversation between myself and a few others, motivated above all by curiosity. The hour of my glorification will come with my death, which can be compared with the falling into the earth of a grain of wheat. My death on the Cross will bring forth great fruitfulness: in the Resurrection the “dead grain of wheat” – a symbol of myself crucified – will become the bread of life for the world; it will be a light for the peoples and cultures.

Yes, the encounter with the Greek soul, with the Greek world, will be achieved in that profundity to which the grain of wheat refers, which attracts to itself the forces of heaven and earth and becomes bread.

9) What happened to Andrew in later years?

Some very ancient traditions not only see Andrew, who communicated these words to the Greeks, as the interpreter of some Greeks at the meeting with Jesus recalled here, but consider him the Apostle to the Greeks in the years subsequent to Pentecost. They enable us to know that for the rest of his life he was the preacher and interpreter of Jesus for the Greek world.

Peter, his brother, travelled from Jerusalem through Antioch and reached Rome to exercise his universal mission; Andrew, instead, was the Apostle of the Greek world. So it is that in life and in death they appear as true brothers — a brotherhood that is symbolically expressed in the special reciprocal relations of the See of Rome and of Constantinople, which are truly Sister Churches.

10) How has the sisterhood of Rome and Constantinople manifested?

To emphasize this relationship, my Predecessor Pope Paul VI, in 1964, returned the important relic of St Andrew, which until then had been kept in the Vatican Basilica, to the Orthodox Metropolitan Bishop of the city of Patras in Greece, where tradition has it that the Apostle was crucified.

A more recent example occurred when the ecumenical patriarch of Constantinople, Bartholomew I, visited Pope Francis on the occasion of his election to the pontificate.

Before all else, I express my heartfelt thanks for what my brother Andrew [Ecumenical Patriarch Bartholomaios I] has said to us. Many thanks! Many thanks!

A later tradition, as has been mentioned, tells of Andrew’s death at Patras [in Greece], where he too suffered the torture of crucifixion.

At that supreme moment, however, like his brother Peter, he asked to be nailed to a cross different from the Cross of Jesus.

In his case it was a diagonal or X-shaped cross, which has thus come to be known as “St Andrew’s cross”.

This is what the Apostle is claimed to have said on that occasion, according to an ancient story (which dates back to the beginning of the sixth century), entitled The Passion of Andrew:

“Hail, O Cross, inaugurated by the Body of Christ and adorned with his limbs as though they were precious pearls. Before the Lord mounted you, you inspired an earthly fear. Now, instead, endowed with heavenly love, you are accepted as a gift.

“Believers know of the great joy that you possess, and of the multitude of gifts you have prepared. I come to you, therefore, confident and joyful, so that you too may receive me exultant as a disciple of the One who was hung upon you…. O blessed Cross, clothed in the majesty and beauty of the Lord’s limbs!… Take me, carry me far from men, and restore me to my Teacher, so that, through you, the one who redeemed me by you, may receive me. Hail, O Cross; yes, hail indeed!”.

Here, as can be seen, is a very profound Christian spirituality. It does not view the Cross as an instrument of torture but rather as the incomparable means for perfect configuration to the Redeemer, to the grain of wheat that fell into the earth.

Here we have a very important lesson to learn: Our own crosses acquire value if we consider them and accept them as a part of the Cross of Christ, if a reflection of his light illuminates them.