St. Aristarchus — A Prisoner Who Sent Greetings to the Colossians 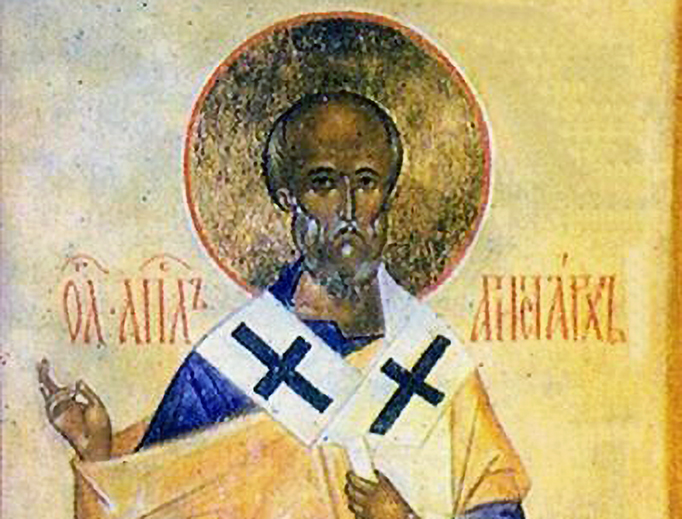 St. Aristarchus — A Prisoner Who Sent Greetings to the Colossians

Aug. 4 is the day set aside for this largely-unknown New Testament saint, “Paul’s traveling companion.”

“The city [Ephesus] was filled with confusion, and the people rushed with one accord into the theater, seizing Gaius and Aristarchus, the Macedonians, Paul’s traveling companions.” ?Acts 19:29

Aristarchus (air-is-TAR-kus) is first mentioned by name in the midst of Paul’s third missionary journey. He was from the city of Thessalonica and at some point became a traveling companion to Paul, assisting him through many regions as Paul shared the message of Christ.

While in Ephesus, the missionaries had tremendous success; however, their influence created a very difficult situation. Many people of Ephesus had put great confidence into a mythological goddess called Artemis. Consequently, it was the trade of many Ephesians to create and then sell statues of the goddess. However, when Paul, Aristarchus, and the others pulled the hearts of many Ephesians toward the truths of Christ, many abandoned their devotion to Artemis, and therefore fewer Artemis figures were purchased.

One silversmith, Demetrius, feared any further loss of income and so rallied together several craftsmen, inciting them into a flurry of anger. The heated group proceeded to run toward the theater, grabbing Aristarchus and another Christian, Gaius, along the way. Paul hoped to speak to the angry crowd but was prevented.

The mob grew, and the shouting and chaos increased until the town clerk of Ephesus came and settled the throng, encouraging them to cease their lawless behavior. The clerk challenged that Demetrius should have used lawful procedures if he had a complaint about Aristarchus, Paul, and the others.

After this troublesome commotion, Aristarchus, Paul, and some others left Ephesus. After much travel and preaching, the group reached Jerusalem. It was during this visit to Jerusalem that Paul was arrested, tried, and sent to Rome as a prisoner. Aristarchus was on the ship with Paul that set sail for Rome.

Aug. 4 is the day set aside for this largely-unknown saint from the Bible. He deserves remembrance for the sacrifices and risks he took in order to assist Paul while spreading the message of Christ. The five passages listed below cover St. Aristarchus’s appearances in the Bible. Think about spending five days with this obscure-yet-brave saint: thoughtfully reading each passage and writing down insights that come to you. See if St. Aristarchus might help you on your journey to know and love God.

Knights of Columbus prepare for fi...