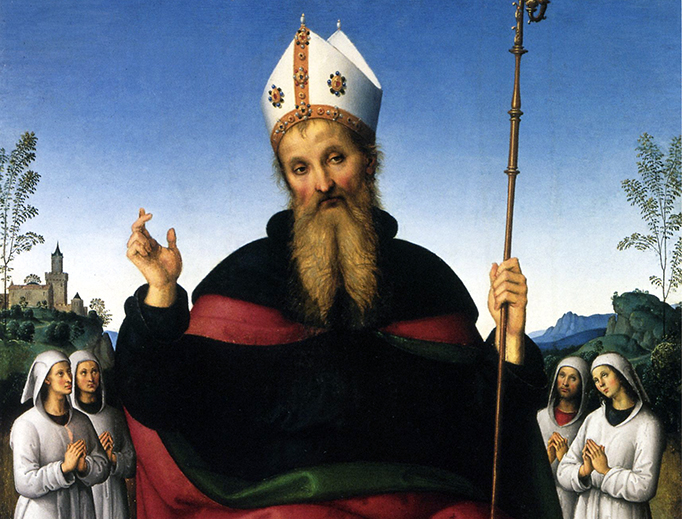 Aug. 28 is the Memorial of Saint Augustine, Bishop and Doctor of the Church

Aug. 28is the memorial of St. Augustine, bishop and doctor of the Church.

He’s one of the most influential Church Fathers and theologians in history.

Who was he and why is he so famous?

1) When and where was he born?

His father—Patricius—was a pagan, though he converted to Christianity on his deathbed.

His mother—St. Monica—was a Christian and raised Augustine in the faith, though he was not baptized until he was an adult.

Latin seems to have been his first language.

2) How did he become aware of sin?

As a boy he became conscious of sin in a special way when he participated in a pointless act of theft. This made a profound impression on him and he later wrote about and regretted it.

In his spiritual autobiography, theConfessions, he described the incident:

In a garden nearby to our vineyard there was a pear tree, loaded with fruit that was desirable neither in appearance nor in taste.

Late one night—to which hour, according to our pestilential custom, we had kept up our street games—a group of very bad youngsters set out to shake down and rob this tree.

We took great loads of fruit from it, not for our own eating, but rather to throw it to the pigs; even if we did eat a little of it, we did this to do what pleased us for the reason that it was forbidden.

Behold, now let my heart tell you what it looked for there, that I should be evil without purpose and that there should be no cause for my evil but evil itself.

3) What other sins did he commit in youth?

He wrote about this in the Confessions, noting a prayer of his at the time that later became famous and reflects the experience of many people. He said:

I, miserable young man, supremely miserable even in the very outset of my youth, had entreated chastity of You [O God], and said,

“Grant mechastityandcontinence. . . but not yet.”

For I was afraid lest You should hear me soon, and soon deliver me from the disease of concupiscence, which I desired to have satisfied rather than extinguished [Confessions8:7].

When he was 19, he began a long-term affair with a woman. We do not know her name, because Augustine deliberately did not record it, perhaps out of concern for her reputation.

She was not of Augustine’s social class, and he never married her, perhaps because St. Monica objected to him marrying a woman of a lower class.

She did, however, give Augustine a son, who was named Adeodatus (Latin, “By God Given” or, more colloquially, “Gift of God”).

This naming indicates an awareness that, no matter how a child is conceived, and even if the parents did something very wrong, every child is a gift of God.

4) How did he develop religiously?

Despite his Christian upbringing, Augustine left abandoned the Faith and became a Manichean, which crushed his mother.

Manicheanismwas a Gnostic, dualistic sect founded in the A.D. 200s by an Iranian man namedMani.

5) Thus far, Augustine has stolen pears just to be naughty, had a long-term affair, fathered a child outside of wedlock, and abandoned the Christian Faith. Things aren’t going so well for him on the becoming-a-saint front. How did he turn it around?

He took a position teaching rhetoric in Milan, Italy and, with the encouragement of his mother, began to have more contact with Christians and Christian literature.

He took this as a divine command and opened the Bible, randomly, to Romans 13:13-14, which reads:

Let us conduct ourselves becomingly as in the day, not in reveling and drunkenness, not in debauchery and licentiousness, not in quarreling and jealousy.

But put on the Lord Jesus Christ, and make no provision for the flesh, to gratify its desires.

Applying this to his own life, Augustine was cut to the heart, and his conversion now began in earnest.

He was baptized, along with Adeodatus, at the next Easter Vigil.

St. Ambrose of Milan baptized both of them.

Incidentally, St. Ambrose may havethe strangest life story of any of the Church Fathers.

6) So now he’s a baptized layman. How did he become a Church Father?

In 388, Augustine, Monica, and Adeodatus prepared to return to North Africa.

Unfortunately, Monica only made it as far as Ostia, the port of Rome, where passed on to her heavenly reward.

Back in Africa, Adeodatus passed away also.

This left Augustine alone on the family property. He sold almost all his possessions and gave the money to the poor. He did, however, retain the family house, which he turned into a monastery.

In 391, he was ordained a priest of the diocese ofHippo(nowAnnaba, Algeria).

In 395, he became the city’s coadjutor bishop and then its bishop.

As bishop, he wrote extensively (in fact, he wroteprodigiously), and the value of his writings was such that he became a Church Father.

At the time, Hippo was being sacked by ArianVandals—meaning actual, historical Vandals (the Germanic tribe), not just people committing the petty crime of vandalism.

Unfortunately, after his death the Vandals burned the city, but they left Augustine’s cathedral and library untouched.

He wascanonizedby popular acclaim, as the custom of papal canonization had not yet arisen.

9) How did he become a doctor of the Church—and why?

Together with Gregory the Great, Ambrose, and Jerome, Augustine was one of the original fourdoctors of the Church. He was proclaimed a doctor by Pope Boniface VII in 1298.

He was named a doctor because of the extraordinarily high value of his writings, which include major theological, philosophical, and spiritual works.

Among his most famous works are:

The Confessions(his spiritual autobiography)
The City of God
On Christian Doctrine
Handbook on Faith, Hope, and Love

This is just atinyselection of what he wrote though. The guy could notstopwriting!

A large selection of his writing is onlinehere.

10) Is it true that Pope Emeritus Benedict XVI has a special attachment to the thought of St. Augustine?

Yes. In his autobiography,Milestones, he wrote:

[Augustine] in his Confessions had struck me with the power of all his human passion and depth. By contrast, I had difficulties in penetrating the thought of Thomas Aquinas, whose crystal-clear logic seemed to me to be too closed in on itself, too impersonal and ready-made.

Later, as pope, he said:

As you know, I too am especially attached to certain Saints: among them (in addition to St Joseph and St Benedict, whose names I bear) is St Augustine whom I have had the great gift to know, so to speak, close at hand through study and prayer and who has become a good “travelling companion” in my life and my ministry [General Audience, Aug. 25, 2010].

The nameAugustineis a form of the titleAugustus, which was given to Roman emperors to indicate their greatness and venerableness. (That’s what “Augustus” means.)

The name of Augustine’s diocese—Hippo—also has interesting resonances. To English speakers, it sounds like a contraction of “hippopotamus,” but in Greek it called to mind a very different animal.

“Augustine of Hippo” thus can be read as “Gus from Horse.”

That Old West sound seems appropriate, since as one of the Latin Fathers, Augustine was from thereallyOld West.

If you like the information I’ve presented here, you should join mySecret Information Club.

If you’re not familiar with it, the Secret Information Club is a free service that I operate by email.

I send out information on a variety of fascinating topics connected with the Catholic faith.

In fact, the very first thing you’ll get if you sign up is information aboutwhat Pope Benedict said about the book of Revelation.

He had a lot of interesting things to say!

Just email me atjimmy@secretinfoclub.comif you have any difficulty.

In the meantime, what do you think?