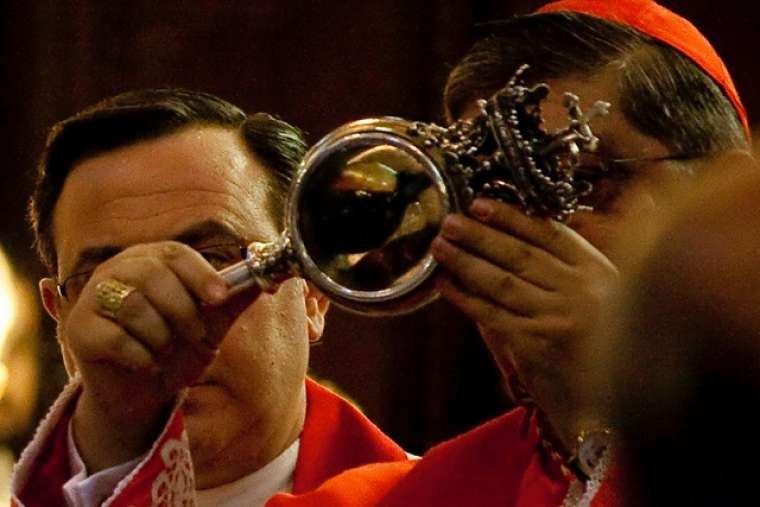 The blood of early Church martyr St. Januarius liquified in Naples Saturday, repeating a miracle dating at least to the 14th century.

The blood was declared to have turned from solid to liquid at 10:02 am in the Cathedral of the Assumption of Mary Sept. 19, the feast of St. Januarius.

Cardinal Crescenzio Sepe, archbishop of Naples, announced the news to a mostly empty cathedral, due to coronavirus restrictions.

“Dear friends, dear all the faithful, once again with joy and emotion I inform you that the blood of our holy martyr and patron St. Januarius has liquefied,” Sepe said.

His words were received by an applause from those present inside and outside the cathedral.

Sepe added that the blood had “completely liquefied, without any clots, which has happened in past years.”

The miracle is “a sign of God’s love, goodness, and mercy, and of the closeness, the friendship, the fraternity of our St. Januarius,” the cardinal stated, adding “Glory be to God and veneration to our saint. Amen.”

St. Januarius, or San Gennaro in Italian, is the patron saint of Naples. He was bishop of the city in the third century, and his bones and blood are preserved in the cathedral as relics. He is believed to have been martyred during the Christian persecution of Emperor Diocletian.

The liquefaction of St. Januarius’ blood happens at least three times per year: the saint’s feast day of Sept. 19, the Saturday before the first Sunday of May, and Dec. 16, which is the anniversary of the 1631 eruption of Mount Vesuvius.

The reputed miracle has not been officially recognized by the Church, but is known and accepted locally. is considered to be a good sign for the city of Naples and its region of Campania.

Instead, the failure of the blood to liquefy is believed to signal war, famine, disease, or other disaster.

When the miracle occurs, the dried, red-colored mass of blood one one side of the reliquary becomes a liquid covering nearly the entire glass.

The last time the blood did not liquefy was in December 2016.

The miracle did occur while Naples was under lockdown for the coronavirus pandemic on May 2. Cardinal Sepe offered Mass via livestream and blessed the city with the relic of the liquefied blood.

“Even in this time of coronavirus, the Lord through the intercession of St. Januarius has liquified the blood!” Sepe declared.

This could be the last time Sepe offers the feast day Mass and confirms the miracle of St. Januarius. Pope Francis is expected to soon name a successor to Sepe, who is 77 years old, in what is considered a very important archdiocese for Italy.

Cardinal Sepe has been archbishop of Naples since July 2006.

In his homily at Mass Sept. 19, the archbishop condemned the “virus” of violence and those who take advantage of others through money lending or stealing funds intended for economic recovery in the pandemic’s wake.

“I think of violence, a virus that continues to be practiced with lightness and cruelty, whose roots go beyond the accumulation of social evils that favor its explosion,” he said.

“I think of the danger of interference and pollution of the common and organized underworld, which tries to grab resources for economic recovery, but also tries to hire proselytes through criminal assignments or money lending,” he continued.

The cardinal said he thinks also “of the evil sown by those who continue to chase wealth through illegal actions, profiteering, corruption, scams” and he worries about the tragic consequences for those who are unemployed or underemployed and now are in an even more precarious situation.

“After the lockdown we are realizing that nothing is the same as before,” he stated, and encouraged the community to be sober minded in considering the threats, not only of disease, to daily life in Naples.

Sepe also spoke about young people and the hope they can give, lamenting the discouragement young people face when they cannot find work.

“We all know well that [young people] are the real, great resource of Naples and the South, of our communities and our territories that need, like bread, the freshness of their ideas, their enthusiasm, their cleverness, their optimism, their smile,” he encouraged.