MORE FROM EWTN
FAITH & RESOURCES
Welcome to EWTN GB - Global Catholic Television Network - Copyright ©
Trending News
HomeArticleSt. John of Capistrano: “The Lord Who Made the Beginning Will Take Care of the Finish!”

St. John of Capistrano: “The Lord Who Made the Beginning Will Take Care of the Finish!” 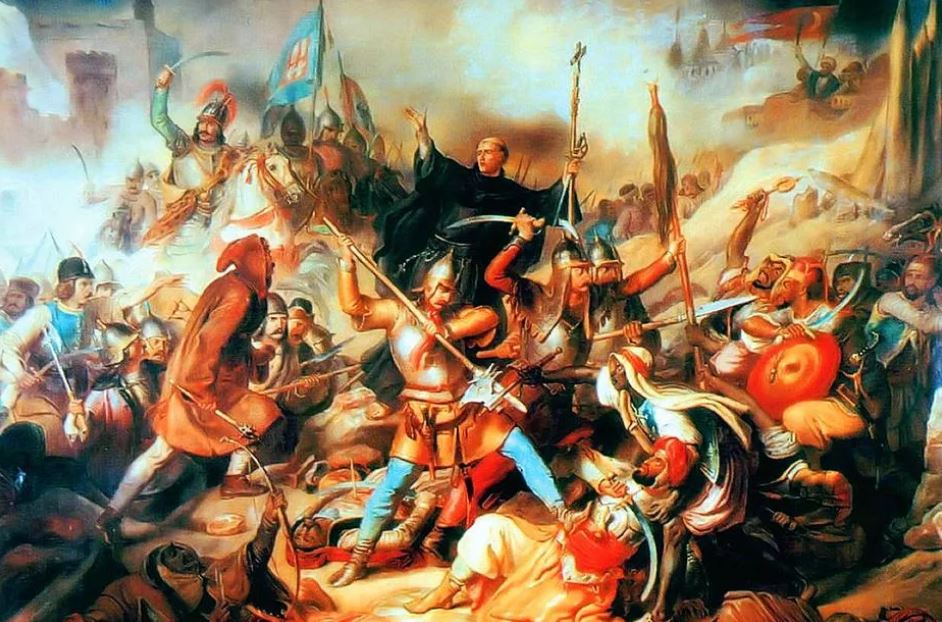 St. John of Capistrano: “The Lord Who Made the Beginning Will Take Care of the Finish!”

Many are familiar with Southern California’s Mission San Juan Capistrano as the place where the swallows return each spring, but few know the story of St. John of Capistrano, the Franciscan saint for whom the mission is named. His feast day is celebrated on Oct. 23.

Giovanni (“John”) Chiori was born in 1386, in the small town of Capistrano, part of the Abruzzi, a region of the old kingdom of Naples in today’s Italy. His first interest was law, and as a young man was governor of the city of Perugia. He was captured and imprisoned in conflicts with a neighboring region and during his captivity resolved to become a religious.

Upon his release, popular legend states that John rode through Perugia sitting backwards on a donkey wearing a paper hat on which he had written his most serious sins. The formerly proud and well-to-do man became an object of derision, as townspeople threw dirt clods and garbage at him. Covered with filth, he rode to the Franciscan monastery and convinced the superior of his willingness to leave his worldly life and become a humble novice. At age 30, he entered the order.

John was known for his life of extreme austerity, walking rough roads barefoot, sleeping only three or four hours a night and wearing a coarse hair shirt. He was acquainted with two other future saints; St. James of the Marches was a fellow student and St. Bernardine of Siena his teacher.https://tpc.googlesyndication.com/safeframe/1-0-37/html/container.html

In 1420, he was ordained a priest at a time of great instability in both church and state. Three men claimed the papacy, conflicts frequently erupted between Italian city-states, the Black Death had wiped out a third of the population of Europe and 40% of the clergy, public morality was growing lax and the ever-present threat of Muslim invasion from the south increased. At a time when many were confused and apathetic about their religious faith, John went up and down Italy preaching to huge crowds. He quickly distinguished himself as a gifted orator. He had a great zeal for conversions, longed for martyrdom, and was noted for his holiness. Believed by many to be a living saint, they brought the sick to John for his blessing.

One of his contemporaries descried St. John this way: “A man small of body, withered, emaciated, nothing but skin and bone, but cheerful, strong and strenuous in labor … He slept in his habit, rose before dawn, recited his Office and then celebrated Mass. After that, he preached, in Latin, which was afterwards explained to the people by an interpreter.”

In 1430, a dispute had arisen concerning the interpretation and observance of the Rule of St. Francis. Tapping on his legal expertise, St. John worked tirelessly to draft the so-called “Martinian statutes,” named for Pope Martin V, in which the heretical Fraticelli were suppressed and the “Spirituals” were freed from interference in their stricter observance.

In 1451, at the request of Emperor Frederick III of Austria, Pope Nicholas V appointed St. John Inquisitor General to help settle doctrinal disputes which had arisen in the region. St. John was revered as a saint and hero as he entered Austrian territory. As Aeneas Sylvius (later Pope Pius II) recalled, “priests and people came out to meet him, carrying the sacred relics. They received him as a legate of the Apostolic See, as a preacher of truth, as some great prophet sent by God. They came down from the mountains to greet John, as though Peter or Paul or one of the other apostles were journeying there. They eagerly kissed the hem of his garment, brought their sick and afflicted to his feet, and it is reported that very many were cured … No square in the city (Vienna) could contain the crowds. They looked on him as an angel of God.”https://tpc.googlesyndication.com/safeframe/1-0-37/html/container.html

In 1453, the Muslim threat to Christian Europe intensified as Constantinople, the capital of Christian Byzantium, fell to Sultan Mehmet (Mohammed) II and his Ottoman Turks. They slaughtered thousands of Christians and desecrated their holy places. The sultan then set his sights on Belgrade, the capital of Hungary.

In 1456, newly-elected Pope Calixtus III, calling Hungary the “Shield of Christianity,” sent John to rally the people to repulse the Turk invasion. In his typically impassioned style, St. John went through the towns and villages of first Bavaria and Austria, then Hungary, raising a mostly peasant army of 30,000. These forces joined at Belgrade with those of János Hunyadi, the great Hungarian general known as the “Scourge of the Turks.” With an army of 60,000, they confronted a Turk army of over 100,000.

The bloody siege of Belgrade ensued. At a critical point of the battle St. John led a charge into the Ottoman lines crying out, “The Lord who made the beginning will take care of the finish!” A famous painting of the battle by Hugo Loischinger in the Hungarian National Museum in Budapest depicts St. John in the thick of the fight, holding a crucifix aloft in one hand and hacking away with a sword in the other. (However, it seems more likely that the 70-year-old cleric’s role was limited to moral support.)

The Turks were overwhelmed by the charge and scattered. They left 50,000 dead, and lost another 25,000 in retreat. The Christian defenders lost fewer than 10,000. The sultan’s defeat was hailed as a great victory for Christendom. Te Deums (ancient Latin prayers of thanksgiving) were sung in churches, while church bells sounded and bonfires burned in celebration. To this day, many Christians give thanks for the victory when they bow their heads at noon to say the Angelus. It was exactly 500 years later on the liturgical feast day of St. John, Oct. 23, 1956, that the short-lived Hungarian uprising against their Soviet Communist occupiers occurred.https://tpc.googlesyndication.com/safeframe/1-0-37/html/container.html

In the months following the Belgrade victory, both Hunyadi and St. John died, probably from the infection bred by the thousands of corpses strewn about Belgrade. St. John was canonized in 1724.