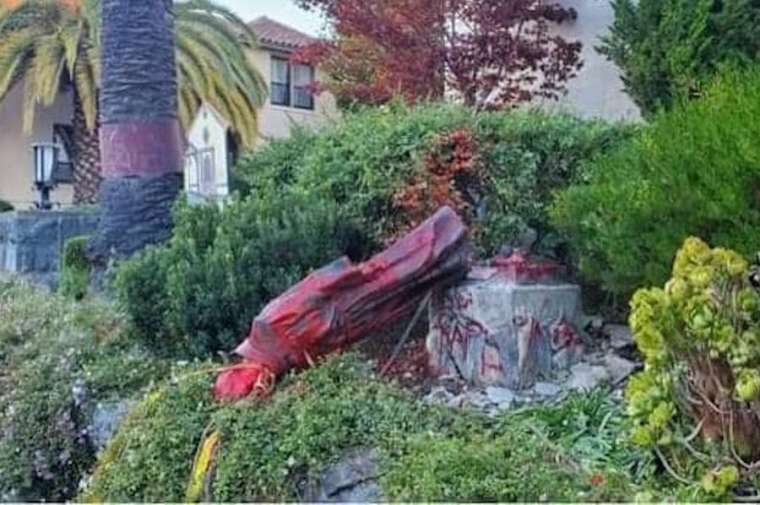 A group of activists near San Francisco on Monday defaced a statue of St. Junipero Serra on private property with red spray paint before tearing it from its foundation.

Serra, an 18th-century Franciscan priest and missionary, is viewed by some activists as a symbol of colonialism and of the abuses that many Native Americans suffered after contact with Europeans. However, historians say the missionary protested abuses and sought to fight colonial oppression.

San Francisco Archbishop Salvatore Cordileone on Tuesday decried the “mob rule” that led to the statue of the saint being “mindlessly defaced and toppled by a small, violent mob.”

“This kind of behavior has no place in any civilized society. While the police have thankfully arrested five of the perpetrators, what happens next is crucial, for if these are treated as small property crimes, it misses the point: the symbols of our faith are now under attack not only on public property, but now on our own property and even inside of our churches,” Cordileone said Oct. 13.

Though Serra himself did not found Mission San Rafael, it owes its existence to Serra’s legacy, as he founded the first nine missions in what would become California.

The hourlong protest, organized by members of the Coast Miwok tribe, marked Indigenous People’s Day, the holiday that some cities and states – including California – have designated to replace Columbus Day.

A church maintenance worker had covered the statue in duct tape before the protest to protect it from graffiti, and boarded up windows at the mission. Numerous statues of the saint have beenvandalizedordestroyedthis year, most of them in California.

The masked rioters peeled off the duct tape and sprayed red paint in the statue’s face.

“This is a continued reminder of the impact of colonization and genocide of our people,” Dean Hoaglin, chair of the Coast Miwok Tribal Council of Marin, told Fox2.

The protestors tried to prevent local news cameras from filming the toppling, but Fox2 captured the statue’s fall on video. At least five people can be seen pulling on the statue’s head with nylon cords and ropes.

The tape appears to show the statue falling on one of the protestors, though there have not been any injuries reported.

Police arrested five women in connection with the incident and charged them with felony vandalism, Fox2 reported.

“We cannot allow a small unelected group of lawbreakers to decide what sacred symbols we Catholics or other believers may display and use to foster our faith. This must stop,” Cordileone said.

“Attacking the symbols of faith of millions of Catholics, who are as diverse in ethnicity as any faith in America, is counterproductive. It’s also simply wrong.”

Mike Brown, spokesman for the San Francisco archdiocese, told local news media that the protestors had not asked the mission to take down the statue prior to Monday’s demonstration.

Cordileone noted that the protest against the statue began peacefully, but soon descended into violence. He encouraged people to learn more about Serra.

“There is no question that the indigenous peoples of our continent suffered under Europeans who came here and their descendants, especially after the mission era ended and California entered into the United States. But Fr. Serra is the wrong symbol of those who wish to address or redress this grievance,” Cordileone contended.

“Fr. Serra and his fellow Franciscans renounced all worldly pursuits to give their lives to serving the native peoples and so protected them from the abuses of their fellow Spaniards.”

Experts have disputed claims that Serra was in any way involved in genocide, and in contrast, there is evidence that Serra advocated for the rights of the indigenous people in the face of mistreatment by the Spanish military.

A California archeologist, who has studied the missions for over 25 years, told CNA earlier this year that it is clear from Serra’s own writings that he was motivated by a missionary zeal to bring salvation to the native people through the Catholic faith, rather than by genocidal, racist, or opportunistic motivations.

“Serra writes excitedly about how he had finally found his life’s calling, and that he would give his life to these people and their salvation,” Dr. Ruben Mendoza, an archeologist and professor at California State University-Monterey Bay, told CNA.

Born on the island of Petra Mallorca in Spain in 1713, Serra joined the Franciscans and quickly gained prominence as both a scholar and professor.

He chose to give up his academic career to become a missionary in the territory of New Spain, in which Spanish colonizers had already been active for over two centuries.

Traveling almost everywhere on foot and practicing various forms of self-mortification, Serra founded mission churches all along the coast— the first nine of the 21 missions in what is today California.

Many of the missions would form the cores of what are today the state’s biggest cities— such as San Diego, San Francisco, and Los Angeles.

In many ways, the missions were a communal venture between the friars and Native leaders, Mendoza said. Soldiers were typically housed in a garrison just off-site from the compound. The compound itself would include work areas, such as a blacksmith’s shop and places for crafts and weaving.

The Europeans taught the Natives new agricultural techniques, as well as instruction in the faith, performing thousands of baptisms.

“Unlike many of us today, Serra was a man on a mission,” Mendoza said.

“He was absolutely determined to engage the salvation of indigenous communities. And while for some that may be seen as an intrusion, for Serra in his time, that was seen as one of the most benevolent things one could do— to give one’s life over to others, and that’s what he did.”

Serra specifically advocated for the rights of Native peoples, at one point drafting a 33-point “bill of rights” for the Native Americans living in the mission settlements and walking all the way from California to Mexico City to present it to the viceroy.

Mendoza said the worst abuses against the Native Americans in California took place after the age of the missions ended, when the Spanish government ceased sending funding to the 21 sites and to the Spanish military.

The soldiers, without the support of their faraway benefactors, began to prey on the missionaries and the Natives. Many more Natives died during this time than had in the 60 years that the missions were operational.

Mendoza said there was a time during the transition to the American era when indigenous people were more vulnerable to attacks by settlers and white authorities if they were not Christian. The fact that the missions had converted many Native communities to Christianity actually helped them survive later European abuses, he said.

By the 1820s— nearly four decades after Serra’s death— friars at the now mostly destitute missions were writing letters of grievance to the American and Mexican governments, advocating for better treatment for the Natives, Mendoza said.

The California gold rush in the 1840s saw hundreds of thousands of European settlers come to the area, with little to no protections afforded to the Natives.

While many Native peoples did suffer horrific abuse, Mendoza said many people conflate the abuses the Natives suffered long after Serra’s death with the period when Serra was alive and building the missions.

Pope Francis canonized Serra in 2015 during a visit to the United States.

“Junípero sought to defend the dignity of the native community, to protect it from those who had mistreated and abused it,” the pope said in his homily at the Mass of canonization.

Statues of the saint have this year become focal points for protests and demonstrations across California, with images of the saint being torn down or vandalized in protest of California’s colonial past.

Rioters pulled down and defaced a statue of Serra in Sacramento on July 4, inspiring a local Catholic to set upa makeshift shrineto Serra on the statue’s empty plinth July 5, and lead other Catholics in cleaning graffiti from the site.

Some California institutions, such as the University of San Diego, have put their statues of Serra in storage to protect them.

The San Rafael arson is the latest in a spate of attacks against Catholic churches across the country.

That same morning, a man crashed a minivan through the front door of Queen of Peace Catholic Church in Ocala, Florida. He then set the church aflame while parishioners inside prepared for morning Mass.

Police arrested Stephen Anthony Shields, 24, of Dunnellon, Florida later that day. He has been charged with attempted murder, arson, burglary, and evading arrest.

Also in July, an as-yet unidentified assailant beheaded a statue of Christ the Good Shepherd at a parish in the Archdiocese of Miami, in Southwest Miami-Dade County.

In 2019, the co-cathedral of the Diocese of Pensacola-Tallahassee was damaged by fire, with several of the chairs in the sanctuary set ablaze using an accelerant. A 32-year-old man with a history of mental illness was later arrested in connection with the arson.

On July 10, the Diocese of Brooklyn announced that New York City police were investigating the vandalization of a statue of the Virgin Mary at Cathedral Prep School and Seminary in Queens. The next day, local police in Boston confirmed that a statue of the Blessed Virgin, located outside the church of St. Peter’s Parish, had been set on fire and suffered damage.

In September, a man broke at least six windows, beat several metal doors, and broke numerous statues around grounds of a Louisiana parish in a late-night vandalism attack that lasted over two hours. The assailant has since been arrested and confessed to the crime.

Also in September, a vandal entered the sanctuary of St. Patrick’s Cathedral in El Paso, Texas and destroyed a nearly 90-year-old statue of the Sacred Heart of Jesus.

Eighty-three percent of Catholic likely voters are concerned about attacks on churches in recent months, according toa pollconducted Aug. 27 – Sept. 1 by RealClear Opinion Research in partnership with EWTN News.