St. Lawrence Laughed in the Face of Death 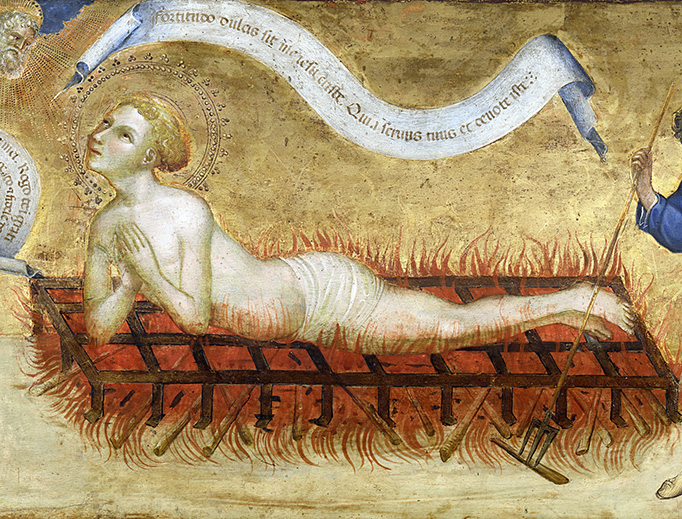 St. Lawrence Laughed in the Face of Death

Happy Feast of St. Lawrence everyone! Remember — a cheerful heart is good medicine.

Stop me if you’ve heard this one:

Q: Do you know the three things God doesn’t know?

A: (1)What a Jesuit is doing,(2) what a Dominican is thinking and (3) how many Catholic religious communities there are for women in the world.

You probably heard some variation of this joke.

The superiors of all the Catholic religious communities met at the Vatican and an argument broke out. They tried to figure out which community God liked the most.

A brave Benedictine stood up and said, “Brothers and sisters! Let us fall upon our knees and beseech the Lord of All and He will tell us who He likes the most!”

At the suggestion, the superiors knelt and prayed as earnestly as they could.

A flash of unearthly light appeared above their heads and a single piece of paper materialized and wafted to the ground.

A Trinitarian priest went over to it, picked it up and read it aloud.

“All of My children are equal in My eyes.

If you look at a list of patron saints, you’d be surprised at who and what constitutes a patronage among saints. In its wisdom, the Church has always sought a humorous twist when assigning patronages to saints. St. Lucy was blinded as a punishment for being Christian and miraculously was given a pair of new eyes. Thus, she’s the patron of Eye Health. St. Apolonia was martyred by having her teeth pulled out and so became, naturally, the patron of Dentists and Those Suffering from Toothaches.

Such is the case with St. Lawrence of Rome.

When Lawrence was martyred by being burned on a slowly-turning rotisserie, he quipped with his tormentors saying, “Turn me over. I’m done on this side.”Catholic comedians look to Lawrence as their patron and pray for similarly clever, risible inspiration. It’s both hilariousanddisturbing, however, to note that because Lawrence was cooked to death, chefs and short-order cooks take him as their patron also.

And speaking of cannibals… two cannibals were having lunch and one of them says to the other, “I hate my brother!”

But seriously folks…I’d like to think St. Larry?I’m sure he’d prefer to be called that?had an irrepressible sense of humor. After all, when Emperor Valerian demanded Larry hand over the riches of the Church, the saint asked for three days to gather the riches. When three days had past, Larry appeared before the Emperor along with all of Rome’s indigent, crippled and blind presenting them as the Church’s “true treasure,” saying, “Behold in these poor persons the treasures which I promised to show you, to which I will add pearls and precious stones, those widows and consecrated virgins, which are the Church’s crown.”

And if that punchline wasn’t enough, Larry went on to say, “The Church is truly rich, far richer than the Emperor.”

The Emperor was not amused and called for Larry to be burned alive on a spit.

The above is probably a modern, romantic interpretation of St. Larry’s actual words. He English translation of his words is, “Take my poor… please! Take my poor!”

St. Anthony of Padua, the Patron of Lost Objects is also the Patron of Finding Parking Spaces which would otherwise be lost to some pagan driving a car. However, Mother Cabrini’s unofficial patronage of the same sphere of influence is based on a really bad pun. She is often called upon to help find a place to stow their cars saying, “Mother Cabrini! Help me park my machini!” Personally, I prefer to avoid that particularly painful pun and instead ask St. Jude for his assistance in finding parking spots in Gotham as it’s an otherwise lost cause to find adequate parking in New York City and thus, it’s within his wheelhouse. By the way, St. Jude Thaddeus became associated with lost causes because his name seemed so similar to that of the traitor Judas Iscariot, most Catholics avoided asking for his assistance. When all other avenues were closed to them, Catholics would resort to Jude as alastresort.

But getting back to St. Lawrence of Rome —he’s not only the patron of comedians, comedy writers, chefs, sous-chefs, short-order cooks and restaurateurs, his assistance is also sought after by Champaign manufacturers, vintners, wine growers, sommeliers, chocolatiers, clowns, fire prevention, glaziers, stained glass artists, libraries, poor, tanners and the French.

By the way, the Perseid Meteor Shower happens every year on St. Lawrence’s’ feast day, Aug. 10, or thereabouts. Because of this, astronomers call the phenomena, “St. Lawrence’s Tears.”

So, to celebrate the feast properly, take the kids out for fast food and tell really bad jokes while they’re eating like this one:

A kangaroo walked into haberdashery and said to the haberdasher, “Hi…I’d like to have the steak dinner, please.”

The haberdasher was surprised but quickly recovered, “I’m sorry, Sir. This is a haberdashery,”

The kangaroo was mortified. “I’m sooooo sorry! Let me just have a hamburger and fries instead.”

The haberdasher explained, “No. I’m sorry…we only sell men’s furnishings.”

The kangaroo gasped. “I’m sooooo sorry! I apologize. Let me just have a bowl of chicken soup instead.”

The haberdasher was a little angry. “No…you don’t understand. We only sell things like men’s umbrellas, cufflinks, ties and gloves…stuff like that.”

The kangaroo was shocked. “Well! Color me embarrassed! I cannot tell you how sorry I am. Let me just have a coffee and some pie instead.”

The haberdasher explodes and grabs the kangaroo by the scuff of the neck and takes him outside the store and points at the sign above the door.

The kangaroo turns to him and says, “If I could read, I’d ask for a menu!”

And after you tell this joke and some other bad ones that can only make kids laugh, bring them out to a dark field and let them see St. Lawrence’s tears.”

Those are tears of joy just like the ones you have when you buy fast food for your kids and tell them really bad jokes.

Happy St. Lawrence’s Feast Day everyone! May God will fill your mouth with laughter and your lips with shouts of joy(Luke 6:21). Remember that a cheerful heart is good medicine (Proverbs 17:22) and the Lord loves a joyous giggler.

St. Lawrence the Martyr and Pruden...

These Saints Bore the Stigmata, th...