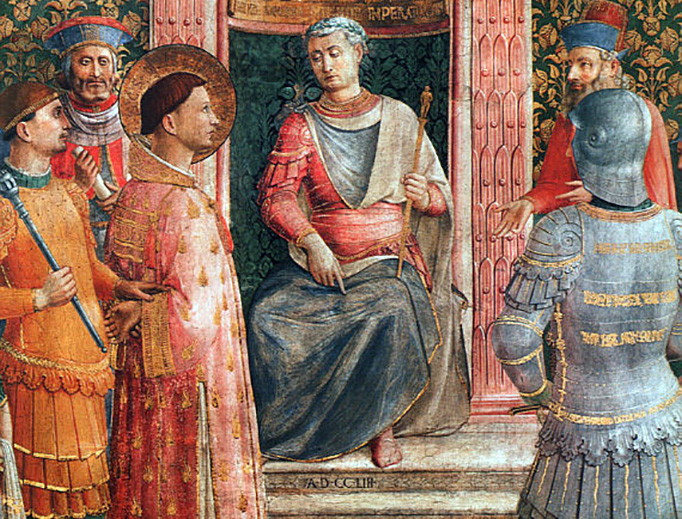 St. Lawrence the Deacon and Aurelius Clemens Prudentius personify the riches of the Church

According to the oldCatholic Encyclopediaentryfor the fourth/fifth century A.D. Spanish poet, Aurelius Clemens Prudentius, he wrote his poems “to glorifyGodand atone for hissins.” He was born in northern Spain in 348 and practiced the law, becoming provincial governor for the Emperor Theodosius I, until he left these worldly pursuits after a visit to Rome in 403. Prudentius then began to practice heroic levels of asceticism, abstaining from meat and fasting every day until evening. In A.D. 405 he published some poems he wrote in praise of God and in memory of the saints and martyrs of the previous centuries.

Prudentius wrote hymns for the offices of the Church’s liturgical prayer in hisLiber Cathemerinon, including poems for Christmas and other great feasts, a few of which are sung in translation today:

Which John Mason Neale translated as:

Of the Father’s love begotten,
Ere the worlds began to be,
He is Alpha and Omega,
He the source, the ending He,
Of the things that are, that have been,
And that future years shall see,
Evermore and evermore!

Earth has many a noble city;
Bethl’hem, thou dost all excel:
out of thee the Lord from heaven
came to rule his Israel.

Fairer than the sun at morning
was the star that told his birth,
to the world its God announcing
seen in fleshly form on earth.

This hymn is sung to the tuneStuttgart.

The Martyrs of Rome: St. Lawrence the Deacon

While he was visiting Rome for the Emperor Theodosius, Prudentius was inspired to write a series of poems praising the great martyrs of the early Church in hisLiber Peristephanon,including Agnes, Peter and Paul, Vincent of Saragossa and today’s saint, Lawrence. Prudentius based his poem on St. Lawrence’s life and martyrdom on the work of St. Ambrose of Milan.

St. Lawrence was martyred on Aug. 10, A.D. 258, under the orders of the Roman Emperor Valerian, who wanted all the Catholic bishops, priests, and deacons arrested and executed. The bishop of Rome, Pope St. Sixtus II was arrested and executed on Aug. 6; Lawrence the Deacon—the last of the seven deacons of Rome—wanted to suffer with him, but Sixtus told him that he would follow him in a few days. (Pope St. Sixtus’s memorial is on Aug. 7 since the Feast of the Transfiguration is celebrated on Aug. 6.)

As both St. Ambrose and Prudentius relate, Lawrence was told to collect the riches of the Church in Rome and instead presented the poor people (to whom he had distributed the chalices, patens and other Altar vessels) as the Church’s true treasures. Angered by what he thought was mockery the Roman prefect tortured Lawrence by chaining him to a gridiron and roasting him to death.

St. Lawrence did not feel the pain of the flames, but knew what was happening to his body so he told the executioner to turn him over on the grill since one side was done—that’s why he is the patron saint of cooksandcomedians.

Authorities cast doubt on some of these details of St. Lawrence’s martyrdom, but they acknowledge certainly that a deacon of Rome named Lawrence was executed by the Romans on Aug. 10, 258, and that devotion to him developed very early. The Emperor Constantine (306-312), Pope St. Damasus I (366-384), Pope Pelagius II(579-90), Pope Sixtus III(432-40), and Pope Honorius III (in the 13thcentury) built or repaired churches dedicated to him. There are nine churches (including four basilicas) dedicated to or associated with St. Lawrence in Rome, sites of his work as a deacon, his arrest, imprisonment, martyrdom and burial. His feast was so important that on the Roman Calendar as of 1962, it was celebrated with a Vigil Mass on Aug. 9. In his iconography, St. Lawrence usually holds a gridiron; depictions of his martyrdom from the Middle Ages to the Renaissance oftenhighlightedthe moment when he told the executions to turn him over, as in the 1557-59paintingby the Venetian artist Titian.

Prudentius also wrote a book that influenced the Church throughout the Middle Ages and into the Renaissance: thePsychomachia, an allegory of the struggle between good (the virtues personified) and evil (the vices personified) in the human soul. The British Library has someimagesfrom two Anglo-Saxon era (10thto 11thcenturies) illuminated manuscripts online, noting that Prudentius’s allegory “of good versus evil was hugely popular in the medieval period with about 300 surviving copies of the work, 20 of which were illuminated.” The monks were battling against sin in their efforts to be perfect and Prudentius’ allegory dramatized this battle.

Spoiler alert: the Virtues win and the soul is saved.

St. Lawrence the Deacon, a third-century martyr, and Aurelius Clemens Prudentius, a fifth-century poet, personify the riches of the Church: saints and those who praise them and encourage us to imitate their virtues:evermore and evermore!