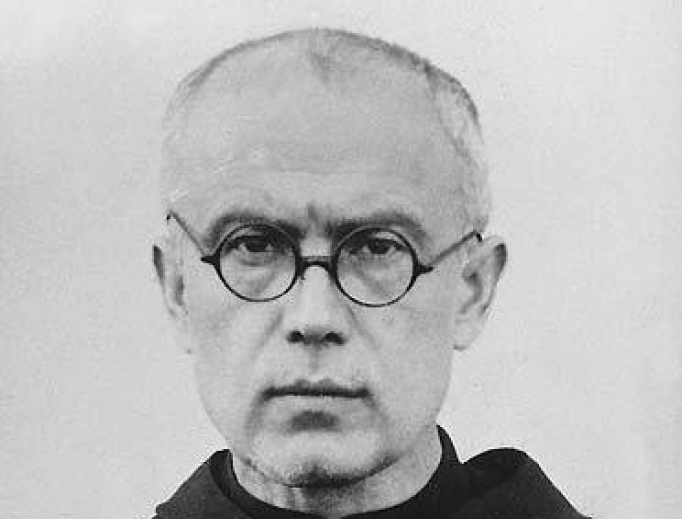 “Greater love has no man than this, that a man lay down his life for his friends.”

Giving one’s life for a friend, the ultimatecall of Christian charity, almost seems like an impossible task. But on this particular feast day of St. Maximilian Kolbe, we have a freshreminder of the kind of bravery, humility, and love for God this type of self-sacrifice takes.

On July 29, 1941, after Polish prisoner Zygmunt Pilawski fled Auschwitz, Nazi SS guards grabbed 10 other prisoners to die for the man’s escape. Father Kolbe heard one of the men chosen, Franciszek Gajowniczek, lamenting this fate, mourning the lost life with his wife and children. Moved by the prisoner’s grief, Father Kolbe asked for Gajowniczek’s life to be spared, telling the guards to take him instead.“I am a Catholic priest,” he said. “Let me take his place. I am old. He has a wife and children.”Franciscan Father Kolbe pointed to the prisoner and repeated, “I am a Catholic priest from Poland.I would like to take his place, because he has a wife and children.”

The guard allowed the exchange. Prisoner No. 16770, Father Maximilian Kolbe, lived for another 15 days in a starvation cell located inside Block 11, enduring beatings and torment at the hands of SS guards. Despite this ongoing anguish, survivors of the camp share memories ofthe starving prisoners praying and singing hymns, led by the one priest who had volunteered to die. Father Kolbe diedfrom a lethal injection of carbolic acid Aug.14,1941. He was 47 years old.

Hundreds gathered this morning in Auschwitz at Block 11 to remember St. Maximilian Kolbe at the place where he died 78 years ago today.

Mass was offered and prayers said as the rain fell this morning over Auschwitz where over 1 million prisoners died during World War II, including this brave priest who is now considered a “martyr of charity,”inspiring us all to be more compassionate

Pope St. Paul VIbeatified Fr. Kolbe Oct.17, 1971. In his homily, Pope Paul VI recalled Kolbe’s tragic departure from this world, saying, “Over this immense vestibule of death hovers a divine and imperishable word of life, that of Jesus revealing the secret of innocent suffering: to be the expiation, the victim, the burnt sacrifice and, above all, to be love for others.”

Canonized a saint Oct.10, 1982, by Saint John Paul II, the popereminded the faithful of Kolbe’s deep love for the Blessed Mary and her Immaculate Heart, saying: “The inspiration of his whole life was the Immaculata. To her he entrusted his love for Christ and his desire for martyrdom. In the mystery of the Immaculate Conception there revealed itself before the eyes of his soul that marvelous and supernatural world of God’s grace offered to man.”

Given his devotion to the Blessed Mother, it almost seems poetic or providentialthat Father Maximilian Kolbe would die on the eve of the feast of the Assumption of the Virgin Mary. As his body was cremated on the feast day, we can remember his words from his letters written years before:“I would like to be reduced to ashes for the cause of the Immaculata, and may this dust be carried over the whole world, so that nothing would remain.”

Saint MaximilianKolbe, pray for us!