St. Monica Can Help Bring Your Loved Ones Back to Christ 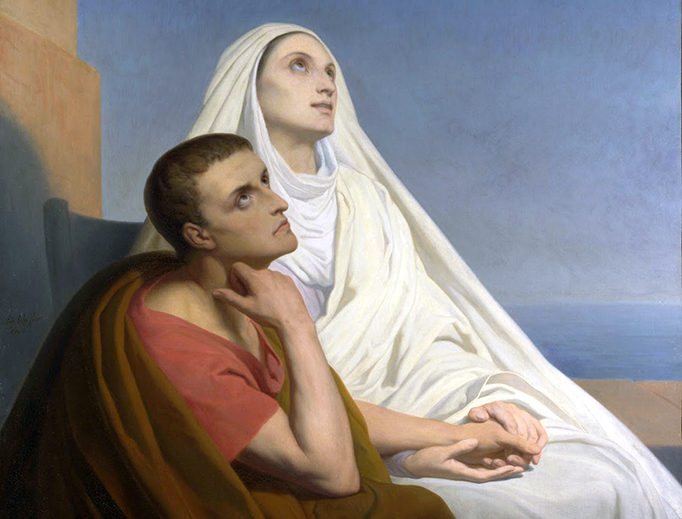 St. Monica Can Help Bring Your Loved Ones Back to Christ

St. Monica’s concern for her child didn’t end when he became an adult. Neither should ours.

As far as I’m concerned, she is the epitome of what I refer to as the “Mommy Heart.”

A true Mommy Heart is driven by love, fueled by determination, and governed by wisdom. St. Monica’s heart is all of that and more.

In other words, I can’t simply stop caring about – and yes, worrying about – them just because they’ve reached adulthood. I bore them, raised them, tended them, and will forever be spiritually and emotionally tied to them because I’m their mom. Plain and simple.

So, when I text them to check in with me because I heard on the news about a terrible accident on the roads they normally travel, they do it. When I warn them not to burn themselves out at work or to get plenty of rest and fluids when they’re sick, they take it with a grain of salt.

They appease me because they know my Mommy Heart requires it of me even though I know they’re fully capable of taking care of themselves.

And, if they don’t like it, they can blame St. Monica.

It was in learning about St. Monica’s life that I understood that a Mommy Heart never shuts down, and that’s OK. Her concern for St. Augustine didn’t end when he turned 18. In fact, it didn’t end when he turned 29 and took off to Rome. Nor did it end after his conversion in his early 30s. She not only worried about him; she followed him from Tagaste to Rome, and on to Milan.

Her Mommy Heart dictated that she should do whatever it would take to bring St. Augustine into the Christian faith.

Far too often I hear parents lament their grown children’s decisions and actions with the deadly words, “He’s/she’s 18. There’s nothing I can do.”

What if St. Monica would have said that aboutherson?

Thanks be to God she did not. Instead she suffered, prayed, fasted, sacrificed, and did all she could to encourage his conversion. She followed along close to him so as to be an ever-present symbol of God’s love for him. In an era of slow communication void of Internet, cell phones, and texting, what other means of checking in with him did she have?

This isn’t the same as helicopter parenting. Our children must learn to make informed, autonomous, and mature decisions. Sometimes they need to fall flat on their faces to learn a lesson. And we parents must let them do so. But what we must not let them do is put themselves in spiritual danger.

What our Lord said about our brethren holds true for our children as well:

“If your brothersins [against you], go and tell him his fault between you and him alone. If he listens to you, you have won over your brother. If he does not listen, take one or two others along with you, so that every fact may be established on the testimony of two or three witnesses. If he refuses to listen to them, tell the church.If he refuses to listen even to the church, then treat him as you would a Gentile or a tax collector.” (Matthew18:15-17)

How much more direct could he have been?

In using the word “brother” Jesus was saying that we are obligated to lead others to him regardless of relationship. He didnotsay, “Everybody else except your adult children.”

It’s not only acceptable, but it’s essential that we continue to care about our children long after they’ve grown up, particularly in regard to their faith. Perhaps we can’t follow them physically as St. Monica did St. Augustine, but we can follow them spiritually with prayer, fasting, and sacrifice. And, when possible, to check in with them by whatever means are appropriate.

I admit that my concern for my children’s physical welfare can at times be over the top. And, I’m grateful that they’re so incredibly patient and understanding with me. But that physical concern, I believe, is a side effect, so to speak, of my concern for their spiritual welfare.

From St. Monica I learned that my Mommy Heart shouldn’t have an on/off switch.