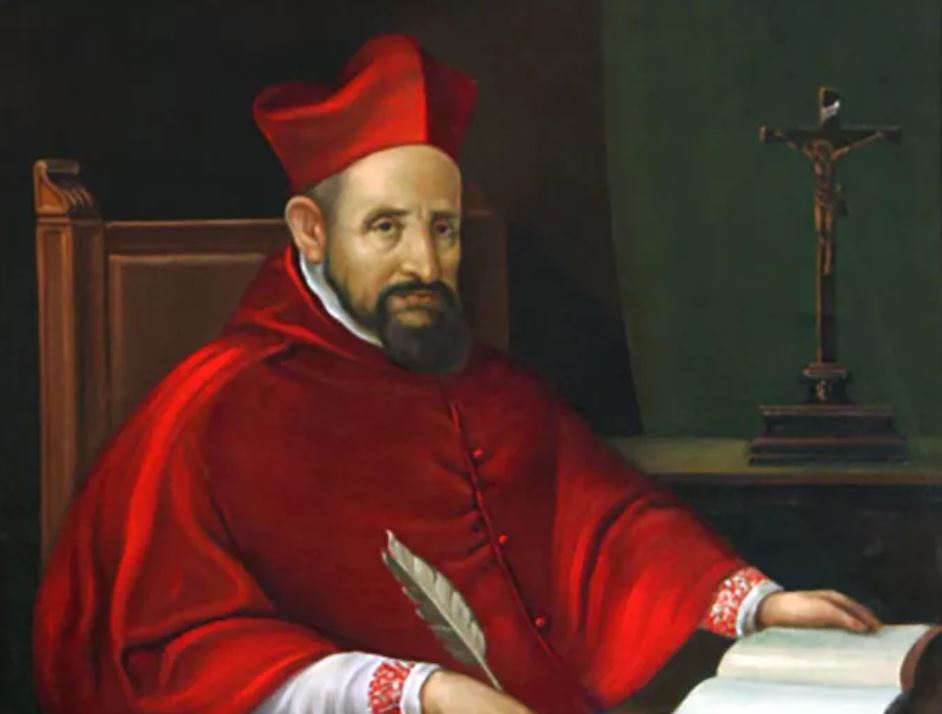 This was a saint who was not only of his time (that of the Counter-Reformation), but ahead of his time.

Among the 36 Doctors of the Church, St. Robert Bellarmine (1542-1621) was unique for several reasons, all of which make up the singular admixture that was his person and position.

One of only two JesuitDoctors (the other is St. Peter Canisius, the “Second Apostle to Germany”), like Canisius, he composed aCatechism. And like the Seraphic Doctor, St. Bonaventure—who was made a Cardinal, as wasBellarmine, much against his wishes—he wrote a work entitledThe Mind’s Ascent. And like Sts. Augustine (who was a bishop, as was Bellarmine), Thomas Aquinas (a professor, just like Bellarmine), and Albert the Great (a scientist), he was incredibly prolific, even by the standards of those multi-voluminous author-saint-doctors.

But as we find with Fr. Kenneth Baker’s new, massive (over 1,000 pages) translation of Bellarmine’sControversies of the Christian Faith, published by Keep the Faith Books, this was a saint with a fight on his hands: namely the Protestants—or to use his own terminology, “the heretics”—who had brought about the Reformation. It was up to Cardinal Bellarmine to put into action the Council of Trent’s Counter-Reformation.

It is one thing, of course, to denounce heretics and schismatics for simply not toeing the Catholic Church’s line. It is quite another to systematically, sanely and piece-by-piece deconstruct their arguments and their veryraisons d’etre. This was Bellarmine’s mission in his “Controversies”: to fight back the heretics, not with the Church Militant (and the secular arm), but with the Church Intelligent and Informed.

“We have to keep in mind that due to the Reformation, Germany was gone, parts of Poland were lost, and the Church was fighting to keep the Protestants out of France and Italy—it wasliterallywar: The Wars of Religion were raging, and it was up to Bellarmine to advise a series of Popes on how to fight back,” says Fr. Kenneth Baker, S.J.

Fr. Baker is Bellarmine’s latest translator and exegete, and the editor emeritus ofHomiletic and Pastoral Review(HPR) and contributing editor toThe Latin Massmagazine. He joined the Society of Jesus in 1947 and was ordained to the priesthood in 1960. Fr. Baker, who “only wanted to teach theology” (and did so, if briefly, after his degrees from the University of Innsbruck—“where I also majored in skiing”—and Marquette) wound up being an editor at Ignatius Press for 16 years, includingHomiletic and Pastoral Review,for a total of 40 years. In 1995HPRwas sold to his close friend Fr. Joseph Fessio’sIgnatius Press—and Fr. Baker remained on for another five years. He is now back at Bellarmine Prep in Spokane, Washington.

Asked how he became interested in translating St. Robert Bellarmine, Fr. Baker mused that, “I had just finished translating theSacrae Theologiae Summa[an eight-volume series on dogmatic theology, also available from Keep The Faith publications]—which is based mainly on St. Thomas Aquinas, but also brings in many of the other Doctors, too—and, since I was now back at Bellarmine Prep, I thought I’d look into the school’s namesake and discovered there was much of Bellarmine’s work that had not yet been translated into English.”

Hence the 1000-pageControversies. Fr. Baker says,“TheControversiestook a full year to translate.” Contained in a single (if enormous) volume, part one deals with the Bible, part two with Christology, and the third part is concentrated on the primacy of St. Peter and the papacy.

“This is good, solid, spiritual reading,” notes Fr. Baker. “I enjoyed translating Bellarmine very much—it was very instructive and I learned a lot in the process.”

“Bellarmine really goes after the Protestants in his work [theControversies]—he doesn’t hold back at all—in every one of his writings: Luther, Calvin, Zwingli—they were fomenting a hostile, violent environment inimical to the Catholic Church and Bellarmine was having none of it,” Fr. Baker reminds us. “So, he really refutes Calvin and Luther and Henry VIII. In fact, at Oxford and Cambridge Universities they would have classes on how to refute Robert Bellarmine, since he was so convincing in his arguments against them!”

“Bellarmine never, ever calls them ‘Protestants’—he calls them ‘Heretics.’ And he says point-blank that they [Luther et al.] are undoubtedly in hell!” Fr. Baker says.

“One of Bellarmine’s confreres in the College of Cardinals called him ‘The most learned churchman since St. Augustine’— and I’d agree with that,” Fr. Baker said. “His knowledge of Scripture and Theology—he seemed to know the entire Bible by heart, plus the teachings not only of nearly every pope, but of many bishops, too! It’s just astonishing. Bellarmine was truly a polymath.”

Concerning the translating of Bellarmine’s prose itself, Fr. Baker found it “much more difficult to translate Bellarmine—who uses metaphors, historical personages whom I’d never heard of, and long, serpentine parables—than the eight volumes of theSacrae Theologiae Summa. In a way, he’s a bit like [Venerable] Bishop Sheen in that he uses lots of concrete examples in his teachings. What was sometimes maddening was that Bellarmine might quote Scripture—but not give chapter and verse, and in some cases, he’d not even name the book he was quoting from.”

No saint (or doctor) lives in vacuum, of course (even hermits have visitors), and St. Robert Bellarmine was no exception. “Bellarmine was the spiritual director and confessor of St. Aloysius Gonzaga, S.J.—for whom he wrote a beautiful elegy since Gonzaga, of course, died such a young man.” Another young Jesuit whom Bellarmine knew was “St. John Berchmans, who studied at the Roman College where Bellarmine was Rector. He, too, died very young.”

This was a saint who was not only of his time (that of the Counter-Reformation), butaheadof his time: “Bellarmine’s teaching on the primacy of the papacy—part III in TheControversiesvolume– became important at the First Vatican Council (1869-70) which defined papal infallibility. Bellarmine had laid the foundation for this definitive teaching which took another couple of hundred years to become dogma,” noted Fr. Baker.

Fr. Baker has also translated the upcomingHomiliesof St. Robert Bellarmine: “The 87 sermons of Bellarmine—and some of these sermons are 10,000 words long!—took me about nine months to translate,” says Fr. Baker. “In fact, some of the sermons include an ‘intermission’, as Bellarmine knew he was talking for such a long time! And a few of these sermons would take over two hours to deliver.”

“Bellarmine was absolutely instrumental in the implementation of the Council of Trent—but at the same time he was a professor at the University of Louvain [Belgium], where he delivered most of the sermons I translated,” says Fr. Baker.

“The Sermons were delivered to graduate students and professors [at Louvain], so they are incredibly learned.” The sermons go through almost every Sunday and Feast Days, as well as sermons on “On the Miseries of Human Life” (which sounds like chapter from Kempis’sImitation of Christ), a dozen homilies on The Creed, and another 12 sermons on Psalm 90/91. That’s right:12sermons ononePsalm.

What’s next for Fr. Baker? “I’m not sure…I’m taking a little break from translating right now.” No one could blame him after his masterworks on Bellarmine’sControversiesand the upcomingHomilies(let alone the eight-volumeSacrae Theologiae Summaas well).