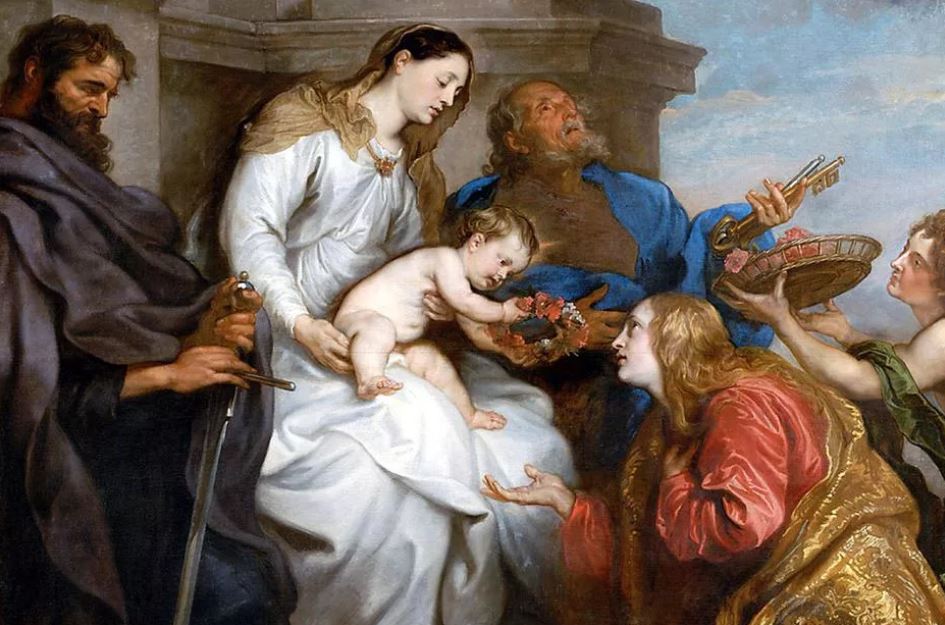 St. Rosalia is the patron saint of Palermo, Sicily, and a saint who has long been called upon in times of pandemic.

I love the saints. I love being startled by their lives and their faith. I love how they play a part in all of our lives, whether we recognize their intercession or not.

St. Rosalia is one of those saints of whom biologists are aware, whether they are Catholic, atheist or otherwise.

I knew that the feast of St. Rosalia was celebrated Sept. 4 but I was surprised that my advisor, an atheist who knew absolutely nothing about Catholicism, knew about her.

I smiled awkwardly and asked him how he knew this little nugget of Catholic esoterica.

“Don’t you know the long-established connection between history of St. Rosalia and ecological studies? She’s the patron saint of the field,” he said in gently admonishing but comical tone.

I’ve found it’s always best to humor your academic advisors. I knew I wasn’t going to earn my doctorate merely relying upon my good looks, academic rigor and the fact that my mother is a professional pastry chef who made Professor Roger and his family some of the finest cannolis he had ever had.

“What are you talking about?” I asked.

And then Professor Rogers regaled me with a fascinating aspect of the synthesis of Catholic spirituality and the sciences.

But first, let’s discuss St. Rosalia (1130–1166), known among Sicilians as La Santuzza (i.e., “The Little Saint”) and Rusulia. She is the patron saint of Palermo, Sicily, and someone who is called upon in times of plague — and pandemics in general.

St. Rosalia was descendent of Norman nobility and a direct descendent of Charlemagne. But, instead of a materialistic courtly life, she decided to be an anchorite or hermit. With the assistance of a brace of angels, it is said, Rosalia chose a cave on Mount Pellegrino in which to live, where she dedicated herself to Christ through a life of penance, mortification and prayer. On the interior cave wall she scratched the words. “I, Rosalia, daughter of Sinibald, Lord of Roses, and Quisquina, have taken the resolution to live in this cave for the love of my Lord, Jesus Christ.”

She lived her holy life and then died in her cave in 1166 unbeknownst to anyone.

In 1624, the Black Death hit the city of Palermo hard and two people reported a vision of St. Rosalia. On July 15, 1624, the saint appeared to two people. First, a woman stricken by the disease and then again to a hunter. The saint directed the later to retrieve her relics from the hidden cave and to bring them to Palermo’s bishop with the order that they should be carried throughout the city three times.

The hunter set out to climb Mount Pellegrino and quickly the cave containing the saint’s relics in. The bones were carried around the city three times and the plague stopped instantly. A church was built on the spot where the relics were discovered. A spring miraculously appeared there and a church was built. Its waters are considered sacred.

This is where George Evelyn Hutchinson (1903–1991) and the sciency stuff comes into play. Hutchinson was a British ecologist/ecological anthropologist known as the “Father of Modern Ecology” — someone skilled in both human cultural studies and the biological aspect of mankind. He spent a great deal doing research in both fields in Italy. Apparently, he had an Italian side to his family on his mother’s side and felt comfortable in the country.

In 1958, one outing brought him to Sicily when he was hunting for water boatman — a corixidae species of insects that lives in ponds and streams and spends its days on its back using its six legs to propel itself across the water’s surface as if riding a little boat. Lo and behold, he found a colony of the bugs in a pool of water that collected from the aforementioned fountain named after St. Rosalia.

Hutchinson was fascinated by Catholic culture and religion and wrote about it often. However, only anecdotal information exists as to his own personal acceptance of the Faith. However, the clearest evidence we have of his devotion is that he had a great deal of respect for St. Rosalia. So much in fact, that he named and dedicated several articles to her.

In the anthropology article, he describes Rosalia’s personal sanctity and why he felt indebted to her for helping his discovery derived from his observations of the ecological adaptation of the water boatmen. After all, the pond was produced by the spill-off of a miraculous fountain that formed in her cave. Hutchinson then proposed in his article and subsequently elsewhere that St. Rosalia should be recognized as the patron saint of evolutionary studies.

Among his other research, Hutchinson wrote on entomology, systems ecology, radiation ecology, biogeochemistry, limnology, a mathematical theory of population growth, genetics, art history, philosophy, religion, biological and cultural anthropology. He researched the theory of interspecific competition and on insect taxonomy, ecological adaptation and genetics and zoo-geography. He created the first mathematical models of ecology many of which are still in use today. In 1957, he also wrote a seminal four-volume Treatise on Limnology and was recognized as an expert on lakes and its flora and fauna.

You might consider St. Rosalia an obscure figure in salvific history but in her tiny little frame was a woman who sealed herself off from humanity for her love of it and of its Lord. She was a heroine, and not just to Professor Hutchinson.

Hutchinson’s theories remain an important part of my research due to St. Rosalia’s intercession, and thus La Santuzza is an inspiration for me and to anyone who has ever marveled at the magnificent detail God used in designing the universe. For only a penny you can buy two sparrows, yet not one sparrow falls to the ground without your Father’s consent (Matthew 10:29). And for the expenditure of some effort, Professor Hutchinson and St. Rosalia have shown us one more thing of intricate beauty about God’s creation.

Bishop urges Catholics to hope as...