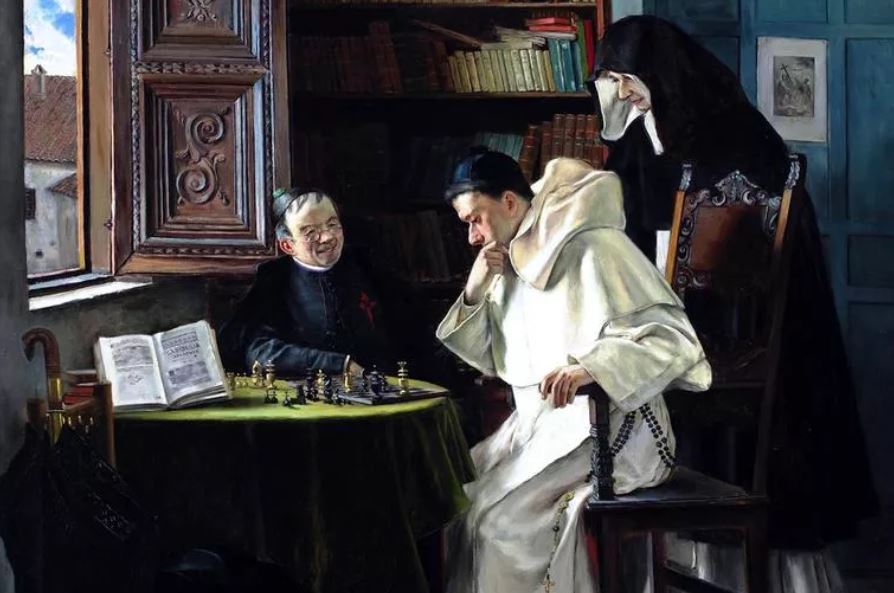 “This King does not allow himself to be taken,” said St. Teresa, “except by one who surrenders wholly to him.”

A surprising amount of my downtime as a lay missionary in Burma was spent playing chess with kids.

I’m hardly what anyone would call a “chess master.” I’m more of a “chess booster.” I like the game. It’s fun to play and it’s a great tool to keep kids sharp-witted, critically-minded and strategy-oriented. I’ve only played competitively once but I could barely keep up against legitimate, authentic chess masters.

My official classification in the International Chess Federation is “Stop Embarrassing Yourself and Quit While You’re Behind.” And yet, I still have fun playing it and teaching kids how to restrict their aggressions on the board and not in real life. But, as long as I was in charge of the Chess Club, the kids saw me as the parish’s Grand High Poobah Chess Mastermind Champion of This World and All Others. But, in all sincerity, I was mostly fakin’ it until I’m makin’ it. After all, you know what they say about the one-eyed man being king in the Valley of the Blind.

Chess interested my students the moment I put up an 8’ x 8’ wall demo board in the school. At one point, we had more than 50 kids in our club. The adults were surprised that we taught chess to the students but, after a while, they came around to this newfangled Western pedagogic idea.

Not only was I able to get the kids fired up about chess but I got them hooked on two chess variants which they appreciated even more — a circular 3-man game version and a two-man three-dimensional version popularized on Star Trek (see photo). Once the demo board was up and operational, the kids wanted to play on it instead of the normal standard-sized boards. They would turn their noses up at the little ones and call them တောသား (taw tharr, or “fit only for the peasants”). They’d break into shoving matches just for the opportunity to play on the wall board. My singular accomplishment was that I got them to fight over who was the better chess player.

I hope St. Teresa of Ávila is proud of me.

Teresa Sánchez de Cepeda y Ahumada of Ávila, Spain (1515-1582) — also called St. Teresa of Jesus — was a prominent Spanish mystic. She’s the patron saint of chess, and a scrappy one at that.

Games weren’t permitted in Teresa’s reformed convents, but she mention chess in her 1566 guide for her Carmelite sisters and monks entitled, The Way of Perfection. In Chapter 16 of her book, she used a chess analogy to describe a Christian’s preparations for prayer. Teresa advised her sister nuns to “play chess” in prayer in order to “checkmate the Lord.” Her point was that a person who wished to play chess must dedicate himself to its study and become a champion. No one plays a game in order to lose. Teresa used the analogy of the struggle in chess to explain to her nuns and monks the type of dedication necessary to meet God in contemplative prayer.

Though she ultimately removed the chess analogy from the final draft of her manuscript, scholars have preserved the text:

I hope you do not think I have written too much about this already; for I have only been placing the board, as they say. You have asked me to tell you about the first steps in prayer; although God did not lead me by them, my daughters I know no others, and even now I can hardly have acquired these elementary virtues [humility and keeping silent when falsely accused]. But you may be sure that anyone who cannot set out the pieces in a game of chess will never be able to play well, and, if he does not know how to give check, he will not be able to bring about a checkmate. Now you will reprove me for talking about games, as we do not play them in this house and are forbidden to do so. That will show you what kind of a mother God has given you — she even knows about vanities like this! However, they say that the game is sometimes legitimate. How legitimate it will be for us to play it in this way, and, if we play it frequently, how quickly we shall give checkmate to this Divine King! He will not be able to move out of our check nor will He desire to do so.

It is the queen which gives the king most trouble in this game and all the other pieces support her. There is no queen who can beat this King as well as humility can; for humility brought Him down from Heaven into the Virgin’s womb and with humility we can draw Him into our souls by a single hair. Be sure that He will give most humility to him who has most already and least to him who has least. I cannot understand how humility exists, or can exist, without love, or love without humility, and it is impossible for these two virtues to exist save where there is great detachment from all created things.

You will ask, my daughters, why I am talking to you about virtues when you have more than enough books to teach you about them and when you want me to tell you only about contemplation. My reply is that, if you had asked me about meditation, I could have talked to you about it, and advised you all to practice it, even if you do not possess the virtues. For this is the first step to be taken towards the acquisition of the virtues and the very life of all Christians depends upon their beginning it. No one, however lost a soul he may be, should neglect so great a blessing if God inspires him to make use of it. All this I have already written elsewhere, and so have many others who know what they are writing about, which I certainly do not: God knows that.

But contemplation, daughters, is another matter. This is an error which we all make: if a person gets so far as to spend a short time each day in thinking about his sins, as he is bound to do if he is a Christian in anything more than name, people at once call him a great contemplative; and then they expect him to have the rare virtues which a great contemplative is bound to possess; he may even think he has them himself, but he will be quite wrong. In his early stages he did not even know how to set out the chess-board, and thought that, in order to give checkmate, it would be enough to be able to recognize the pieces. But that is impossible, for this King does not allow Himself to be taken except by one who surrenders wholly to Him.

Even a cutthroat (the way I taught my kids to play it) game of chess can be used to illustrate God and illuminate the way of perfection for believers. There’s nothing new under the sun (Ecclesiastes 1:9) and God is all in all (Ephesians 4:6). All creatures, from pawns to kings, recognize that all Creation is for the Father and the Son and the Holy Spirit (1 Corinthians 8:6).

This Painter Is Reviving Baroque A...