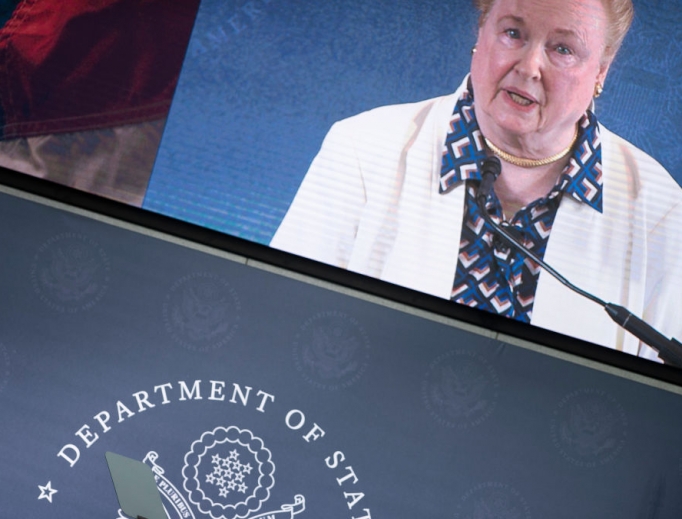 The Commission on Unalienable Rights’ first draft report has prompted backlash from organizations and religious representatives, who criticized the report’s emphasis on religious liberty.

WASHINGTON — The Commission on Unalienable Rights, an advisory committeeformed last yearto provide the U.S. State Department with advice that grounds an understanding of human rights in the nation’s founding principles, released a draft report last month that highlighted religious liberty alongside property rights as being of fundamental importance.

However, the report has prompted backlash from an array of organizations and religious representatives that support progressive political agendas, who criticized the report’s emphasis on religious liberty.

The reportstatedthat “foremost among the unalienable rights that government is established to secure, from the founders’ point of view, are property rights and religious liberty. A political society that destroys the possibility of either loses its legitimacy.”

Secretary of State Mike Pompeo said, inremarksannouncing the report July 16, that it emphasized religious freedom because “no society can retain its legitimacy or a virtuous character without religious freedom,” and “our founders knew that faith was also essential to nurture the private virtue of our citizens.” He also said that “Americans have not only unalienable rights, but also positive rights, rights granted by governments, courts, multilateral bodies. Many are worth defending in light of our founding; others aren’t.”

When Pompeo announced the formation of the advisory commission in July 2019, he noted that “more than 70 years after the Universal Declaration of Human Rights, gross violations continue throughout the world, sometimes even in the name of human rights.”

He argued that international institutions “designed and built to protect human rights have drifted from their original mission,” and “as human-rights claims have proliferated, some claims have come into tension with one another, provoking questions and clashes about which rights are entitled to gain respect. Nation-states and international institutions remain confused about their respective responsibilities concerning human rights.”

Last month he said that the July 16 draft report provided the State Department with “essential questions” to guide an understanding of human rights, like “Are our foreign-policy decisions rooted in our founding principles?” and “Does a new rights claim that’s being presented represent a clear consensus across different traditions and across different cultures, as the Universal Declaration [1948 Universal Declaration of Human Rights] did, or is it merely a narrower partisan or ideological interest?”

But a group of academics and religious leaders, including Sister of Social Service Simone Campbell, the executive director of the social-justice lobby NETWORK; Marianne Duddy-Burke of DignityUSA, a dissenting Catholic group that advocates for “LGBT rights”; Rev. Katey Zeh of the Religious Coalition for Reproductive Choice; and several university professors,wrotein response to the report that the commission’s “approach — which seeks to elevate religious freedom above other human rights —will weaken religious freedom itself and undermine respect for and damage the protections of the universal values of human dignity.” They wrote that “human rights are mutually reinforcing; none is subordinate to another, nor should anyone be denied these rights because of who they are or whom they love.”

Mary Ann Glendon, chairwoman of the Commission on Unalienable Rights and Harvard Law professor, told the Register, in an email speaking only on her own behalf, that the letter’s claim “that the Report of the Commission on Unalienable Rights seeks to elevate religious freedom above all other human rights, thus enabling governments in other parts of the world to ‘disregard religious freedom as a foreign or Western concept that they are not obliged to follow’” is “a puzzling complaint.”

“While the promotion of religious freedom is certainly an important element of American foreign policy, mandated in fact by Congress, so is the promotion of democracy, freedom, the equality principle, and the fight against the modern form of slavery, human trafficking,” said Glendon, a Catholic who served as the U.S. ambassador to the Holy See in 2008-2009.

She explained that while the report identifies religious freedom as one of several “fundamental principles,” it does not place it above these other principles. “The report outlines the historical and contemporary reasons why U.S. foreign policy places special emphasis on several fundamental principles, including religious liberty, but nowhere does it suggest that religious freedom is or ought to be the top priority,” she said. “Indeed, policy advice is specifically excluded by the Commission’s Charter.”

Glendon said that the report denounced “the promotion by Western groups of claims that have not achieved the status of internationally recognized human rights, a practice that threatens the great post-World War II human rights project and is deeply resented in the developing world.”

As the State Department solicited comments on the document, more than 200 organizations and individualswroteto Glendon in a July 23 letter to counter the report and express the opinion that “the validity of the human rights project is in no way imperiled by the increasing number of rights claims made by those whose rights have historically been denied them” and rejected “the report’s recommendation that the United States adopt a foreign policy that identifies certain rights as more important than others. This effort to rank rights opens the door to any number of problematic actions by governments that seek to undermine their human rights obligations and violate individual liberties.”

A Hierarchy of Rights

Elyssa Koren, the director of U.N. advocacy at Alliance Defending Freedom International, told the Register that when the religious leaders stated in their letter that “we believe freedom of religion must never be used as a pretext to diminish other rights,” it was not clear to her “that they’re referencing the agreed set of fundamental human rights [of the Universal Declaration of Human Rights]. They potentially could be thinking of religious freedom trampling things that aren’t in fact rights, such as the perceived right to abortion, which we know stems from a misconstrued conception of human dignity.”

She praised the report’s “back to basics” approach, which found that “in the absence of consensus over all of these new and emerging so-called rights, things that we just don’t agree on, we have to go back to the approach that was used by the drafters of the Universal Declaration on Human Rights at the very start of the international human-rights project right after World War II.”

According to Koren, “There’s a whole history to that subdivision of rights. … The Universal Declaration of Human Rights emerged in such a way that we do recognize that there is such a thing as fundamental human rights, ones that are truly tied to our inherent dignity as people.”

“Their approach was informed by the fact that the world had just emerged from these two catastrophic wars, and they understood with total certainty that they had to come up with something,” she said.

John Paul IItoldthe U.N. that in “the relationship between spiritual values and material or economic values,” it is “the spiritual values that are preeminent, both on account of the nature of these values and also for reasons concerning the good of man. The preeminence of the values of the spirit defines the proper sense of earthly material goods and the way to use them. This preeminence is therefore at the basis of a just peace.”

Aaron Rhodes, president of the Forum for Religious Freedom-Europe, told the Register that “critics and members of the human-rights community have denied the legitimacy of even examining distinctions among the vast array of human rights that have amassed in the international system.”

He said, “A large coalition ofactivists and others even claimed that making any distinction between unalienableor inherent rights and positive rights had no place in human-rights discourse at all.”

He called that conclusion “a sad commentary on the establishment human-rights community, revealing an appalling ignorance about the philosophical and moral principles behind the rights they are trying to defend, because, at its very core, human rights rests on a distinction between moral rights that are inherent and universal — human rights — and those that are established by rulers and legislatures — between rights that have their basis in nature and those with a basis in positive law.”

This modern ignorance of the distinction between universal rights that have a basis in nature and those based in law was perhaps on display whenThe New York Timesreported on the commission’s findings bycallingnatural law — the idea held by St. Thomas Aquinas and the CatholicChurchthat humans have a common, intrinsic moral sense of right and wrong — “a term that human rights scholars say is code for ‘God-given rights’ and is commonly deployed in fights to roll back rights for women and L.G.B.T.Q. people.”

Rhodes said that “the commission’s report, to its credit, unpacks and illuminates this distinction” between inherent, universal rights and those based in positive law, although he expressed concern with the report’s “embrace of economic and social rights,”including“freedom from fear and want” from the 1948 Declaration on Human Rights, which he said “are clearly positive rights that depend on the state.”

“The report is good in worrying about human-rights proliferation and inflation and in stating the obvious fact that some rights are more important to honoring human nature than others,” he said, but added that “the report leaves us hemmed in by the contradictions in international human rights that have led to the mess we see in the U.N.”

The Expansion of Rights

Emilie Kao, the director of the DeVos Center for Religion and Civil Society at the Heritage Foundation, said that the draft report showed the need for “a clear understanding of what positive law is and what human rights are; and, unfortunately, there’s been this incredible expansion of what are called human rights from the original 30 rights in the Universal Declaration on Human Rights.”

“If everything is a right, then rights cease to mean anything,” she said. “That doesn’t lead to more enforcement or better protection of human rights; that just creates a credibility problem.” As for the critics, Kao said that “they never define what constitutes a human right and what doesn’t constitute a human right. They have no limiting principle, from what I’ve seen, so if there’s such an infinite number of new rights that they can create, that’s very problematic, and they should be addressing the problems that could be created by an inflation of human rights.”

She called the commission’s report “wise to point [out] that the United States should be very cautious about recognizing these new rights, because are they actually rights that have universal consensus? Are they rights that are going to conflict with other recognized, fundamental rights? These terms get thrown around so loosely, and the United States is trying to take a cautious approach so that there can be clarity so that there can be more enforcement.”

Who Is the Month of August Dedicat...