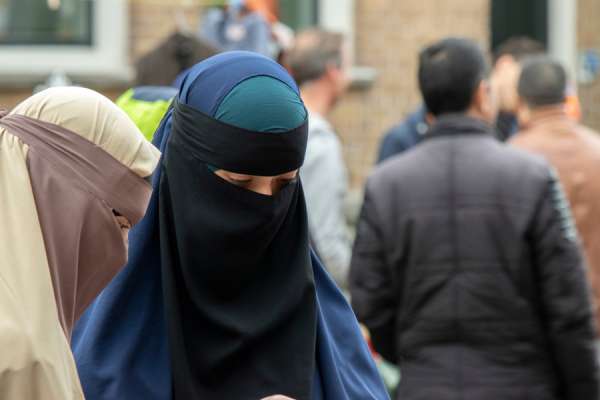 CNA Staff, Mar 8, 2021 / 06:33 pm (CNA).- Swiss voters have narrowly approved a proposal to religious facial coverings in public nationwide. Though the move will affect a small minority of Muslim women, commentators voiced concerns about the effect on religious freedom and tolerance for religious minorities.

Over 51% of voters backed the measure in a March 7 vote. The ban on facial coverings in public places does not mention Islam directly but was presented as a burqa ban. It would also affect protesters who wear ski masks and bandanas. The ban exempts venues that are religious institutions, facial coverings used for health reasons and masks used for traditional Carnival celebrations.

Authorities must implement the referendum with legislation within a two-year period.

About 5% of Switzerland’s 8.6 million people are Muslim. Most have ancestral roots in Turkey, Bosnia and Kosovo, BBC News reports. Almost no Muslim women in Switzerland wear a burqa, a full body covering that uses a mesh screen to cover the eyes. Perhaps 30 women in the country wear the niqab, which veils the face but leaves the eyes visible.

Foes of the measure had included major religious groups. The Swiss Council of Religion put out a Jan. 25 statement opposing the measure, with support from the Conference of Swiss Bishops.

“The initiative claims to want to strengthen public safety. However, it is in reality directed against a tiny minority of the population. The initiative does not solve any problem, neither for the women concerned, nor in response to the challenges posed by radical religious ideologies in our society,” the Council of Religion said.

The nationalist Swiss People’s Party, which backed the measure, characterized it as “a strong symbol in the fight against radical political Islam.”

“The burqa creates a barrier between the person wearing it and the environment and thus prevents integration into society,” said the party’s president Marco Chiesa, according to NPR News.

The Swiss People’s Party is currently the strongest in parliament. The committee behind the face covering ban, called the Egerkingen Committee, was headed by Swiss People’s Party lawmaker Walter Wobmann, who launched a successful 2009 proposal to ban the construction of new minarets, the Associated Press reports.

One leading Muslim group charged that it was motivated by anti-Muslim sentiment.

“Today’s decision opens old wounds, further expands the principle of legal inequality, and sends a clear signal of exclusion to the Muslim minority,” said the Central Council of Muslims, a Swiss group that plans to challenge the measure in court.

Some Muslims who oppose the clothing backed the ban.

The Swiss government opposed the measure, saying it should be handled regionally. They said the ban will harm tourism, since most women who wear such clothing are visitors from wealthy Persian Gulf states, the Associated Press reports. Two regions already ban such coverings.

The country’s capital of Bern and three largest cities sided against the proposal, as did voters in several major tourist destinations.

France, Denmark, the Netherlands and Austria have banned the coverings. In February 2020 a German court struck down a school’s ban on niqabs, on the grounds that the law in Hamburg did not allow authorities to implement such a ban.

The Council of Religion statement on the Swiss proposal stressed the importance of freedom of religion, including in clothing. Any regulations on this freedom must have “an overriding public interest” or in the name of “protecting the religious liberty of others.”

It was “disproportionate” to make a constitutional ban for the few women in Switzerland who are fully veiled, the council said, adding that religious motives for facial coverings are not comparable to facial coverings to escape criminal prosecution. It argued that the ban would create “a difficult dilemma” for the women affected.

“They would be exposed to a double injunction: on the one hand the religious requirement to cover their heads and, on the other hand, the state obligation to uncover their heads,” said the statement.

“The initiative claims to want to strengthen public safety. However, it is in reality directed against a tiny minority of the population. The initiative does not solve any problem, neither for the women concerned, nor in response to the challenges posed by radical religious ideologies in our society,” the statement added.

Andreas Tunger-Zanetti, director of the Center for the Study of Religions at the University of Lucerne, discussed the question in a Feb. 19 interview with the Catholic media center Cath-Info, a service of the Conference of Swiss Bishops.

“Many women who wear a nikab especially want to keep religious commandments. This is often based on a fundamentalist interpretation,” Tunger-Zantetti said. “In some cases, there may be a political agenda behind it. But the link with an organized Salafist Islam, political or pietist, is rather weak.”

He voiced concern about the decline in knowledge of religious facts and concepts and in the ability to interpret religious practice. Many people do not know the number of daily prayers Muslims are required to say, and they see even this practice as “a sign of radicalization.”

He saw the measure as “a defensive reflex due to uncertainty.”

Other European countries have passed rules that conflict with religious practices.

In Belgium, both Muslim halal and Jewish kosher slaughter practices have been banned on animal welfare grounds. In December 2020 a European Union court said the Belgian law is justified by the need to promote animal welfare even if it does not accommodate religious freedom.

Belgian’s Jewish umbrella group said they would take the case to the European Court of Human Rights.

European Union rules and regulations in many European countries require that animals be made insensible to pain before slaughter. Both Muslim and Jewish rules regarding animal slaughter preclude stunning because they require that the animals be in perfect health. Most European countries and the EU have religious exemptions to the requirement to stun animals. The Belgian rules do not.

Scammer arrested after attempt to...