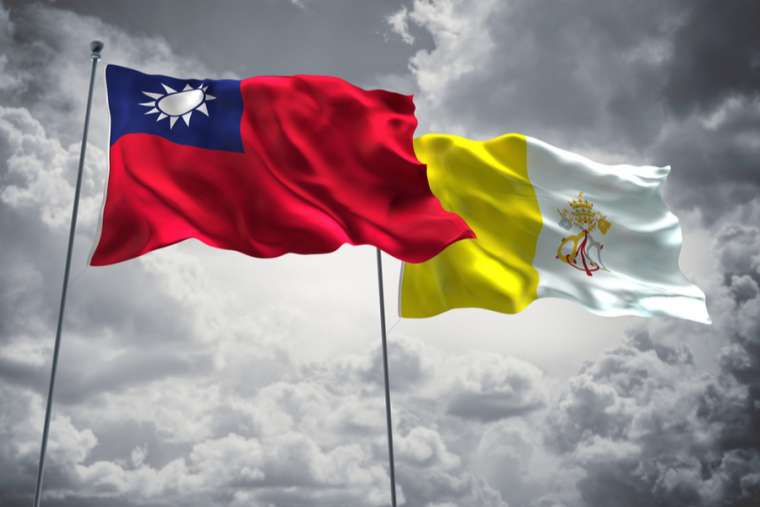 Taiwan’s foreign ministry said Tuesday that it hadreceived assurances from the Vatican regarding the renewal of the Vatican-China deal.

Amid concern overwhat a Vatican decision to renew its 2018 accord with Beijing would mean for the Holy See’s diplomatic relationship with Taiwan, Joanne Ou, spokesperson for Taiwan’s Ministry of Foreign Affairs,told journalists that the Vatican hadstressed that its agreement was pastoral rather than political.

“The Vatican has assured us repeatedly that the bishop appointment deal with China is a religious rather than a diplomatic matter,”Ou said at a press conference Sept. 15, according to the national news agency of Taiwan, officially the Republic of China (ROC).

The Holy See is the only remaining country in Europe that recognizes Taiwan as a country. For 77 years, the Holy See has had formal diplomatic relations with the ROC, while the Church has not had an official diplomatic presence on the mainland People’s Republic of China (PRC) since it was officially expelled by Beijing in 1951.

The Chinese Communist Party government in mainland China views Taiwan as a rebel province and has historically put pressure on countries to cut diplomatic ties with the island. After the United Nations ceased to recognize the Taiwanese government in 1971, the majority of member states severed official ties and the Vatican embassy has been led by a chargé d’affairs, rather than a full ambassador.

“We have been closely observing the interactions between the Vatican and Beijing, and we maintain smooth communications with the Holy See,”Ou said in response to a question aboutwhether the renewal of the Vatican-China deal would adversely affect Holy See-Taiwan relations.

Her comments came a day after Vatican Secretary of State Cardinal Pietro Parolin told journalists that the Vatican expectedto renew its interim deal with China on the appointment of bishops, as part of efforts to “normalize” the life of the Catholic Church in China.

When asked by journalists about the prospect of the provisional agreement being renewed, Parolin replied: “Our intention is that it be prolonged, that we continue to adopt it ‘ad experimentum’ [on an experimental basis], as has been done in these two years, in order to further verify its usefulness for the Church in China.”

The Vatican Secretary of State said that the Vatican agreement with China — signed on Sept. 22, 2018 — hadnot expired and wouldnot do so until October, “two years from the time it came into force.”

“As we have said many times and here too, our interest is to normalize life as much as possible, so that the Church can live a normal life which for the Catholic Church is also to have relations with the Holy See and with the pope and then that there is unity within the Chinese Church,” Parolin said Sept. 14, according to Zenit.

“Our perspective is on this ecclesiastical theme,” Parolin added, noting that this goal should also take place “against a backdrop of peaceful coexistence, the search for peace and overcoming tensions.”

Reuters reported Sept. 14 that Pope Francis hadsigned off on the two-year extension of the two-year provisional agreement that went into effect on Oct. 22, 2018, adding that an anonymous senior Vatican official said that “there are no changes” in the renewed agreement, the contents of which have not been disclosed.

There have been concerns ever since the Vatican entered into dialogue with China that the Chinese government would demand that the Holy See break ties with Taiwan as a prerequisite forestablishing full diplomatic relations.

In July, the Hong Kong newspaper South China Morning Post quoted a Vatican source as saying that the Holy See could even move its embassy from Taiwan to the mainland.

“Taiwan should not be offended if the embassy in Taipei is moved back to its original address in Beijing,” the Vatican source was quoted saying.

Taiwan’s newly installed Archbishop Thomas An-Zu Chung said that such a move “could happen soon if the mainland Chinese government is more open-minded and receptive towards the Roman Catholic Church.”

“In reality, the Sino-Vatican agreement has not had an actual impact on Taiwan’s relationship with the Vatican,” Chung told the South China Morning Post.

“This is such an awkward period. We are seeing bishops are still being locked away and religious freedom is worsening on the mainland as negotiations go on between Rome and Beijing,” the archbishop of Taipei said.

“There are some gesture changes but in realitynothing has improved. So we are still watching. We have religious freedom in Taiwan but we will be praying for those who can’t express their faith to have the strength to carry on.”