Telling Jesus’ Story: ‘The Chosen’ and the Grace of God 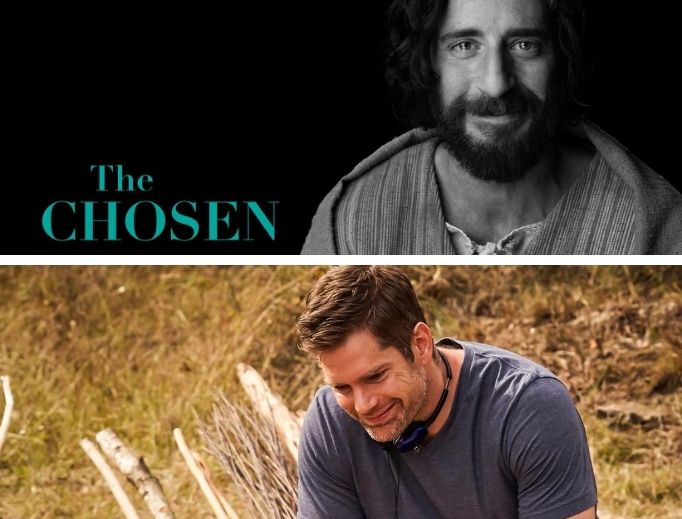 Telling Jesus’ Story: ‘The Chosen’ and the Grace of God

By Bree A. Dail

This was the answer thatDallas Jenkins, producer and director for the record-smashing seriesThe Chosen, was given in prayer, after a film project he had worked on bombed at the box office and, with it, a contract for future work on major productions.

Jenkins explained that although he and his wife didn’t understand what God’s answer entailed, he never could have imagined the extent of God’s generosity to his willingness to surrender.

Roumie, who plays the role of Jesus in the series (see his interview with the Register athere), exchanged quips with his director as they shared spiritual lessons from their work and shared some news of the highly anticipated next season of the crowdfunded series.

The Register asked Jenkins, an evangelical Christian, who not only produces and directs, but also writes the series, if he found himself writing his own experiences, prayers and conversations with Christ.

“You can only go by what you have and what you know as a human being. I am a flawed, sinful man. What I do know is humanity,” he said. “I am a student of human behavior. What I try to do is bring that humanity into the people I am writing — yes, even my own experiences. Maybe God chose me because I am flawed, and sinful, and have some life experiences that could inform the writing of this. I sure hope that’s the reason; and it does match how he has done this throughout history and the Scriptures, choosing not the best and brightest, the most successful.”

He added, “The Chosenwas created out of a significant life failure. He chose me to do this project at my lowest career moment. He has done this throughout Scripture, and so I think this is why people find authenticity in this.”

Roumie, who is Catholic, added that, as he read through the scripts he received, he found himself often relating to Peter, identifying with his flaws and struggles.

“Peter was someone who was stubborn. It took some time in his life to get to the point for him to humble himself, to surrender. Even then, two and a half or three years later, he still denies him. I find I relate to him in this — that, throughout our life, through sin, through mistakes and our own egos — all of the worldly contaminates that contribute to being human; it’s almost inevitable that we fail repeatedly. It’s only by the grace of God that we get back up again — like Peter did. That’s what faith in Jesus Christ is, really.”

He continued, “I find it very difficult at times to relate to Jesus, really. I mean, he was fully human — but fully divine. There is no way we can identify, in the sense, in his Godhead, so I find I can only go so far — he has a body; he breathes; he had relationships — but that is as far as I can go, really. So, yes, Peter is one I relate to, especially now, doing this series.”

As for what to expect in the new season, Jenkins said, “In Season Two, we begin in Samaria and also begin to explore some of the interpersonal relationships of this muddled band of new disciples.”

“When we left off in Season One, seven of these disciples — plus Mary Magdalene — are headed towards Samaria. And as we start off Season Two, we begin to witness the impact that Jesus has already had in that town … that normally would have been resistant to Jewish presence,” Jenkins said. “So that kind of sets the tone for the rest of the season. We also see the arrival of Thomas, who we met in Episode Five (the Wedding at Cana) and witness what happens when a tax collector — whom the other members of the team hated at one point — now begins to live amongst them. How does that dynamic work out?”

Jenkins continued, “A couple more disciples are added, and we also will explore early on why Jesus nicknamed James and John the ‘Sons of Thunder.’ All of this, to include the fame of Jesus, bringing with it both positive and negative attention — and pressure — to their group. So, yes, interpersonal dynamics are heavy themes in this season.”

Jenkins also provided some inside news on the location of the series. The first season was filmed in Texas, which stood in for Capernaum. But, for the second season, they were looking for a new set in lieu of building a whole new one. And, eventually, a set became available for them to use in Utah.

Jenkins explained that, throughout this process, he and his team — including Roumie as an actor — have come to realize that the less time they spent worrying over doing their due diligence, and the more they gave to God, the more he returned to them — for their surrender for miraculous generosity, including the new set in Utah. “We will now be filming on this wonderful set, and I know this season will change lives.”

Surrender was a topic of conversation Roumie and Jenkins returned to throughout the interview. Both admitted to the difficulty of balancing their anticipation and trust in God’s providence. Jenkins said that when he was at his lowest point, after a failure, “Out of the blue, someone on Facebook messaged me — they didn’t say ‘Hi’ or anything. They just said this: ‘Remember, it’s not your job to feed the 5,000. It’s only to provide the loaves and fish.’ That phrase changed my life,” he told the Register. “The only thing I need to accomplish, the only thing that is necessary for me to do, is be the best baker of bread and fisher of fish I can be — so that when I provide my five loaves and two fish, when I give that to God and he deems it worthy of acceptance, the transaction is over. What he does with it — whether he feeds the 5,000 or not, or he only feeds 100 … or, in the case ofThe Chosen, he feeds over 7 million in the downloads of the app throughout the world, that isn’t my job to worry about. It’s not my job to attempt to produce, and it’s also not my credit when it happens. That’s a good place to be in.”

For his part, Roumie related that his central role has allowed him to introduce his social-media followers to the Divine Mercy Chaplet during quarantine to pray for an end to the pandemic and to give people hope.

“It brings me a lot of peace,” he said of the devotion, adding that he discerned the Holy Spirit exhorting him, “You should pray this prayer because people will find peace in it.” And they did, finding “great comfort,” he recalled, including a Baptist, he said, who told him his anxiety attacks “went away — praise God.” He also had the opportunity to discuss Catholic devotions with his followers, which proved to be a blessing.

That chaplet prayer online “led to the Rosary,” too, online.

Prayer, Roumie said, keeps him in a good place to portray Jesus.

He has a Marian devotion and explained that when spiritual warfare comes, “the Rosary … gives me a lot more peace.”

He also related, “My weapons against spiritual warfare are just straight-up prayer.”

Legal abortion 'above my pay...

The Modern Muddle Between Morals a...