The annual Assumption tradition of blessing the sea 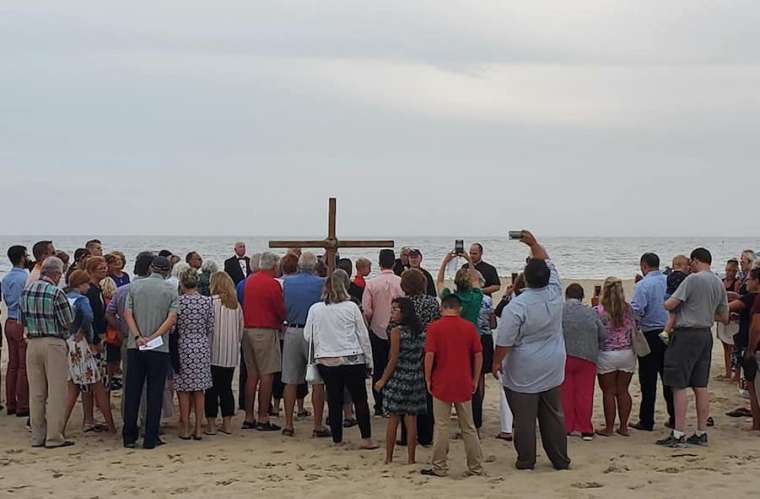 The annual Assumption tradition of blessing the sea

For hundreds of years, Catholic parishes in coastal cities have participated in the tradition of blessing the sea and praying for the intercession of the Blessed Virgin Mary on the Feast of the Assumption.

While believers in landlocked areas may be unfamiliar with the practice, it is a longstanding tradition that provides an opportunity not only to pray for safe travel at sea during the coming year, but also to profess one’s faith outside of church walls, one priest told CNA.

“Obviously, the prayers and blessings are good in themselves … I think it’s [also] a good reminder that there is not simply a place for religion in public, but there’s a hole that we needed to fill and it helps make us better people,” said Father John Solomon, pastor at St. Mary, Star of the Sea in Ocean City, Maryland, which has taken part in the tradition for more than 20 years.

The tradition of blessing of the sea dates back to 15th century Italy and has since become a custom in coastal cities throughout Europe and the United States.

According to the Trenton Monitor, the custom is believed to have begun when a bishop traveled by sea during a storm on the Feast of the Assumption. The bishop then threw his pastoral ring into the ocean and calmed the waters.

Some parishes throw a wreath of flowers into the sea and or conduct the blessing from a boat. Participants may go swimming afterward or use bottles to collect the seawater.

Parishioners at St. Mary, Star of the Sea typically begin the celebration with a Mass celebrated by the bishop. This is followed by a procession to the local beach, where holy water is sprinkled into the ocean as the community prays.

More than 60 people gathered at the event last year, said Solomon, noting that it had been his first year at the parish and first year attending the event.

“Then after the blessing, we also have a lot of international students who work here in the summer … We’ll give them a meal and just an opportunity for them to come in and just relax.”

This year, because of COVID-19 restrictions, the parish will omit the Mass and procession. Instead, parishioners will meet on the beach, practicing social distancing and wearing masks.

Solomon noted that travel by sea was a dangerous means of transportation, especially hundreds of years ago. Even today, travel by sea carries risks.

For this reason, the priest said, it is fitting to pray for safe ocean travel to Mary Star of the Sea, a medieval title that emphasizes Mary’s role as a “guiding star” for those pursuing Christ.

“From pretty early times, there was an understanding of asking for Mary’s intercession as the Star of the Sea,” he stressed. “She is one of the patrons of the ocean for keeping us safe as we travel … it’s good to know that there is one who is a mother that is trying to keep us safe.”

Solomon said the event is also an opportunity to show the Catholic faith to the local community. While there may be a stereotype that religious people are simple or unintelligent, the blessing of the sea is a public chance to express the Catholic faith and show that normal people can have a devotion to Christ and his Church.

“To believe doesn’t mean that one is less intelligent or less reasonable, but in a sense, the most reasonable because this is faith and this is truth,” he said.