The Assumption of Mary: 12 Things to Know and Share 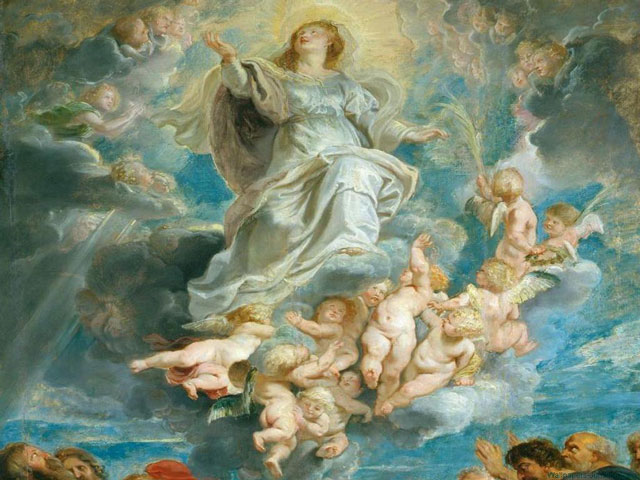 The Assumption of Mary: 12 Things to Know and Share

August 15 is the Assumption of Mary. Here are 12 things to know and share…

August 15 is the solemnity of the Assumption of Mary.

In the United States, it is a holy day of obligation (in years when it does not fall on a Monday).

What is the Assumption of Mary, how did it come to be defined, and what relevance does it have for our lives?

1) What is the Assumption of Mary?

The Assumption of Mary is the teaching that:

The Immaculate Mother of God, the ever Virgin Mary, having completed the course of her earthly life, was assumed body and soul into heavenly glory [Pius XII,Munificentissimus Deus44].

2) What level of authority does this teaching have?

This teaching was infallibly defined by Pope Pius XII on November 1, 1950 in the bullMunificentissimus Deus(Latin, “Most Bountiful God”).

As Pius XII explained, this is “a divinely revealed dogma” (ibid.).

This means that it is a dogma in the proper sense. It is thus a matter of faith that has been divinely revealed by God and that has been infallibly proposed by the Magisterium of the Church as such.

3) Does that mean it is an “ex cathedra” statement and that we have to believe it?

Yes. Since it is a dogma defined by the pope (rather than by an ecumenical council, for example), it is also an “ex cathedra” statement (one delivered “from the chair” of Peter).

Because it is infallibly defined, it calls for the definitive assent of the faithful.

The definition of the dogma, in conformity with the universal faith of the People of God, definitively excludes every doubt and calls for the express assent of all Christians [General Audience, July 2, 1997].

Note that all infallibly defined teachings are things we are obliged to believe, even if they aren’t defined “ex cathedra” (by the pope acting on his own).

The bishops of the world teaching in union with the pope (either in an ecumenical council or otherwise) can also infallibly define matters, but these aren’t called “ex cathedra” since that term refers specifically to the exercise of the pope’s authority as the successor of St. Peter. (It’s Peter’scathedraor “chair” that symbolizes the pope’s authority.)

4) Does the dogma require us to believe that Mary died?

It is the common teaching that Mary did die. In his work,Fundamentals of Catholic Dogma, Ludwig Ott lists this teaching assententia communior(Latin, “the more common opinion”).

Although it is the common understanding of that Mary did die, and although her death is referred to in some of the sources Pius XII cited inMunificentissimus Deus, he deliberately refrained from defining this as a truth of the faith.

On 1 November 1950, in defining the dogma of the Assumption, Pius XII avoided using the term “resurrection” and did not take a position on the question of the Blessed Virgin’s death as a truth of faith.

The BullMunificentissimus Deuslimits itself to affirming the elevation of Mary’s body to heavenly glory, declaring this truth a “divinely revealed dogma.”

5) Why should Mary die if she was free from Original Sin and its stain?

Being free of Original Sin and its stain is not the same thing as being in a glorified, deathless condition.

Jesus was also free of Original Sin and its stain, but he could—and did—die.

However, it seems fitting that Mary’s body, which was by nature mortal, should be, in conformity with that of her Divine Son, subject to the general law of death.

6) What are the earliest surviving references to Mary’s Assumption?

The first trace of belief in the Virgin’s Assumption can be found in the apocryphal accounts entitledTransitus Mariae[Latin, “The Crossing Over of Mary”], whose origin dates to the second and third centuries.

These are popular and sometimes romanticized depictions, which in this case, however, pick up an intuition of faith on the part of God’s People.

7) How did the recognition of Mary’s Assumption develop in the East?

There was a long period of growing reflection on Mary’s destiny in the next world.

This gradually led the faithful to believe in the glorious raising of the Mother of Jesus, in body and soul, and to the institution in the East of the liturgical feasts of the Dormition [“falling asleep”—i.e., death] and Assumption of Mary.

8) How did Pius XII prepare for the definition of the Assumption?

In May 1946, with the EncyclicalDeiparae Virginis Mariae, Pius XII called for a broad consultation, inquiring among the Bishops and, through them, among the clergy and the People of God as to the possibility and opportuneness of defining the bodily assumption of Mary as a dogma of faith.

The result was extremely positive: only six answers out of 1,181 showed any reservations about the revealed character of this truth.

9) What Scriptural basis is there for the teaching?

Although the New Testament does not explicitly affirm Mary’s Assumption, it offers a basis for it because it strongly emphasized the Blessed Virgin’s perfect union with Jesus’ destiny.

This union, which is manifested, from the time of the Savior’s miraculous conception, in the Mother’s participation in her Son’s mission and especially in her association with his redemptive sacrifice, cannot fail to require a continuation after death.

Perfectly united with the life and saving work of Jesus, Mary shares his heavenly destiny in body and soul.

There are, thus, passages in Scripture that resonate with the Assumption, even though they do not spell it out.

10) What are some specific Old Testament passages?

Pope Pius XII pointed to several passages that have been legitimately used in a “rather free” manner to explain belief in the Assumption (meaning: these passages resonate with it in various ways, but they don’t provide explicit proof):

Often there are theologians and preachers who, following in the footsteps of the holy Fathers, have been rather free in their use of events and expressions taken from Sacred Scripture to explain their belief in the Assumption.

Thus, to mention only a few of the texts rather frequently cited in this fashion, some have employed the words of the psalmist:

and have looked upon the Ark of the Covenant, built of incorruptible wood and placed in the Lord’s temple, as a type of the most pure body of the Virgin Mary, preserved and exempt from all the corruption of the tomb and raised up to such glory in heaven.

Treating of this subject, they also describe her as the Queen entering triumphantly into the royal halls of heaven and sitting at the right hand of the divine Redeemer(Ps. 44:10-14ff).

Likewise they mention the Spouse of the Canticles “that goes up by the desert, as a pillar of smoke of aromatical spices, of myrrh and frankincense” to be crowned (Song 3:6; cf. also 4:8, 6:9).

These are proposed as depicting that heavenly Queen and heavenly Spouse who has been lifted up to the courts of heaven with the divine Bridegroom [Munificentissimus Deus26].

11) What are some specific New Testament passages?

Moreover, the scholastic Doctors have recognized the Assumption of the Virgin Mother of God as something signified, not only in various figures of the Old Testament, but also in that woman clothed with the sun whom John the Apostle contemplated on the Island of Patmos (Rev. 12:1ff).

Similarly they have given special attention to these words of the New Testament: “Hail, full of grace, the Lord is with you, blessed are you among women”(Luke 1:28), since they saw, in the mystery of the Assumption, the fulfillment of that most perfect grace granted to the Blessed Virgin and the special blessing that countered the curse of Eve [Munificentissimus Deus27].

12) How can we apply this teaching to our everyday lives?

According to Pope Benedict XVI:

By contemplating Mary in heavenly glory, we understand that the earth is not the definitive homeland for us either, and that if we live with our gaze fixed on eternal goods we will one day share in this same glory and the earth will become more beautiful.

Consequently, we must not lose our serenity and peace even amid the thousands of daily difficulties. The luminous sign of Our Lady taken up into Heaven shines out even more brightly when sad shadows of suffering and violence seem to loom on the horizon.

We may be sure of it: from on high, Mary follows our footsteps with gentle concern, dispels the gloom in moments of darkness and distress, reassures us with her motherly hand.

Supported by awareness of this, let us continue confidently on our path of Christian commitment wherever Providence may lead us. Let us forge ahead in our lives under Mary’s guidance [General Audience, August 16, 2006].