‘The Chosen’ as Scriptural Visual Art 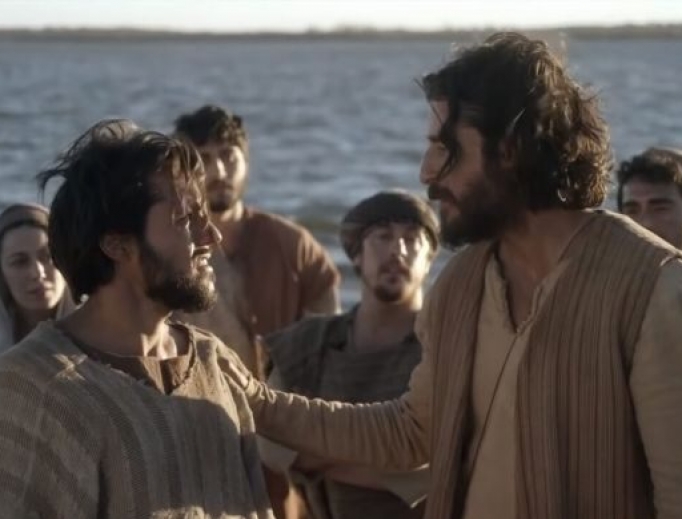 ‘The Chosen’ as Scriptural Visual Art

COMMENTARY: The series brings to the fore the personal aspect of the call of Jesus and the response human beings must make.

In the early day of the pandemic, there was a viral expansion of advertisements and recommendations on my social media accounts aboutThe Chosen, a 2019 drama series about the life of Jesus.

Many contained hype aboutThe Chosenbeing the highest crowd-funded TV series of film project of all time, about how it has been seen by more than 20 million people, in 50 languages, across 180 countries. My general aversion to fads and herd behavior, however, won the day.

Two other things gave me pause. The word that the series was “based” on the Gospels but gave lots of extra-Biblical, imaginative “background,” made me wonder what the series would do for my blood pressure. I am always interested in visual depictions of the life of Jesus, but when biblical accounts are mixed with fictional interpolations and extrapolations, I’ve found that most of these additions annoy rather than aid.

Moreover, Catholic theological training in general forms us to wait prudently until something is over before giving general reviews, since something that starts out with much promise could end up being a hook for something harmful at the end. This is part of the wisdom in the way the Church handles claims of private revelations, for example. And so I would normally hesitate writing an article after only one season of a projected eight.

But once public worship resumed, the volume of Massgoers asking me for my opinion on the series, multiplied by questions from various penitents and spiritual directees, pushed me over the edge. I had to watch it, at least to flag any potential concerns. Some vacation time in August gave me the opportunity.

I was very pleased overall by the eight episodes of the series’ first season and found most of it to be a very helpful and beautiful visual meditation on the life of Jesus. The figure of Jesus, played byJonathan Roumie, is manly, cheerful and attractive, someone the strength of whose personality would be able to get very down-to-earth people to leave everything to follow him.

Playing Jesus may be the most difficult acting assignment there is, not only because most Christians already have strong impressions about him they are vigorously prepared to defend, but also because no human being can possibly depict the divine dimension of the hypostatic union. Roumie approaches that challenge in the only adequate way, through prayer before and during filming.

“I always ask that it’s not my voice or my personality that comes through but that of the Lord’s,” he said in an interview. He is also praying after the series, using his new status as an icon of Jesus to lead others in prayer, using YouTube to pray the Rosary, the Chaplet of Divine Mercy and a novena to St. Joseph with viewers, as well as to speak about the Eucharist.

Throughout the first season, Nicodemus is given a much larger role than the Gospels accord him, which is an interesting choice on the part of creator, director and co-writer Dallas Jenkins, a fervent Evangelical. I found Jenkins’ inventions with regard to Nicodemus, however, credible. They allow viewers to see Jesus from the perspective of a member of the Sanhedrin, with the typical questions a scholar and lover of the law of Moses would pose toward the spiritual fulfillment Jesus was bringing.

Nicodemus is also a “seeker,” someone making a sincere attempt to discover the truth, as many today are. He has been called throughout the centuries the “reluctant disciple,” someone who comes to Jesus “by night,” who out of cowardice and pusillanimity keeps his faith hidden, who gives oblique defenses of Jesus when colleagues in the Sanhedrin turned on him, and who surfaced as a believer only after Jesus’ crucifixion.

His character reveals that the essence of Christianity is not knowing Jesus or believing in him but faithfully following and imitating him. Many will relate to Nicodemus’ struggles to do so.

The first eight episodes also develop the figures of Peter, Mary Magdalene, and Matthew. Peter is shown as a struggling fisherman, a stubborn and strong leader, impulsive and action-oriented, proud but capable of humbling himself.

The Gospels imply that he was married — he had a mother-in-law — but say nothing about his wife or marriage, leading some to question whether he was a widower and others to speculate that Jesus may have broken his wife’s heart in summoning Peter to leave everything to follow him.

I very much like the way that Jenkins presents Mrs. Simon bar Jonah: someone whose faith in God, her expectation of the Messiah, and her love for her husband led her to rejoice when Jesus saw the good in her husband and called him to be at her side. Her fiat to Peter’s vocation and mission, setting him free to serve the Bridegroom, is heartwarming.

There is a heavy focus on the vocation of Mary Magdalene. She is discretely shown at the beginning of the series as a prostitute and very plainly as a possessed woman whom typical exorcisms cannot liberate, until she meets Jesus, who frees her.

“I was one way and now I’m completely different,” she says later. “And the thing that happened in between was him.”

Jesus shows her a chaste confidence and she in turn seems to help the apostles relate to Jesus as a person rather than just a projection of their Messianic hopes. I don’t care for how, prior to Jesus’ exorcising her, she is referred to as “Lilith,” which imports a lot of unnecessary baggage from Jewish demonology and modern radical feminism that unfortunately won’t impede further neo-gnostic concoctions about her. If anyone deserves a more sober, biblically-tighter portrayal, it’s Mary Magdalene.

The greatest liberties, however, are taken with the story of Matthew the publican. Jenkins presumes that ancient tax collectors needed to be detail-oriented mathematical geniuses rather than low-level corrupt mafiosi, and therefore portrays Matthew anachronistically with Asperger’s.

While the attempt toward inclusion is admirable, it really doesn’t fit other aspects of the biblical account, especially Matthew’s being the king of the sinners capable of hosting a party full of his ilk, not to mention someone chosen not just to write a Gospel but to be sent out into the crowds among wolves to proclaim it.

His conversion story, nevertheless, is moving and highlights not only how Jesus summoned the outcasts but how following Jesus meant giving up much to gain much more.

As a whole, through these vocational portrayals and others, the series brings to the fore the personal aspect of the call of Jesus and the response human beings must make. Jenkins certainly delivers on his goal to portray Jesus “through the eyes of those who met him,” and through that perspective viewers can sense that they are meant, too, to be among “the chosen.”

I have liked very much the visual meditations on Jesus’ miracles. The wedding feast of Cana is very well-developed and among the most moving things I’ve ever seen on screen. After viewing the healings of the paralyzed man and of a leper, one may never read or hear those Biblical accounts the same way again. The miracle of the miraculous draught of fish has Peter catching fish strangely near the shore rather than after having “put out into the deep,” but nevertheless clearly reveals Jesus’ overwhelming generosity. The healing of Peter’s mother-in-law shows Jesus’ routine personal concern.

I also appreciate the wayThe Chosenhas handled Biblical flashbacks, whether to Jesus’ early days — like the finding in the Temple —or to Old Testament prophecies regarding Jesus, from Abraham, Moses and the prophets, all of which give a much richer context to the visual Gospel narrative, especially for those who have greater familiarity with the Bible.

The second season of this series of scriptural visual art is set to start filming in September. It will feature greater development of the apostles James, John and Nathaniel and will continue examining how the disciples respond to Jesus’ miracles as well as how the Pharisees and scribes begin to organize in opposition to Jesus.

For those who haven’t seen it, it is available for free on YouTube or on The Chosen App. Production is funded fundamentally by viewers who, moved by what they’ve seen, desiring to see more and wanting others to see it, are contributing via crowd funding about $10 million per season.

With many, I’m looking forward to the second and subsequent seasons.