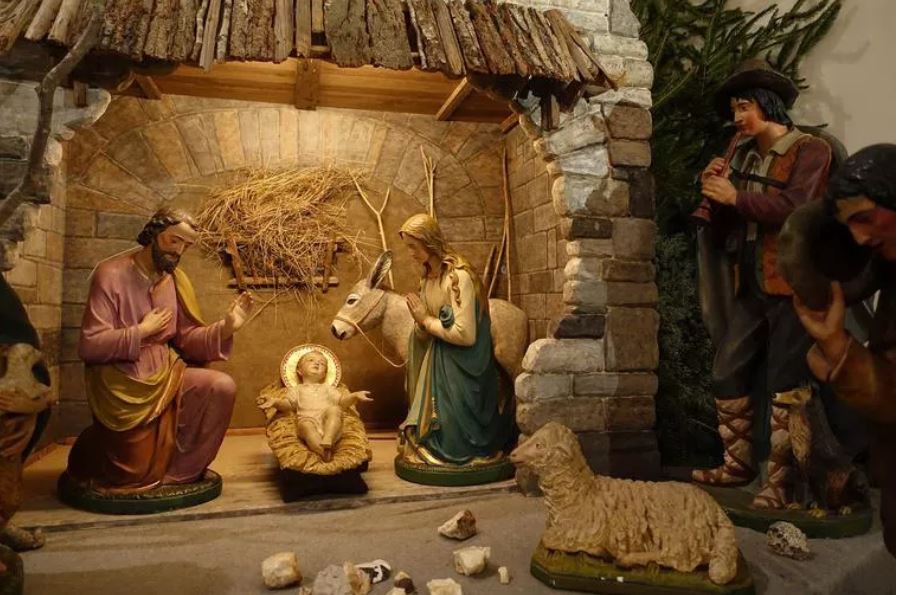 Many have called the Holy Land the “fifth Gospel” because there you can experience all of the principal events of the liturgical year in a little over a week. There are special Masses to be celebrated at each of the holy sites that take precedence over whatever else is in the liturgical calendar.

In the empty tomb, you celebrate Easter Sunday every day of the year; on Calvary, the Triumph of the Cross; in Nazareth, the Annunciation; on Mount Tabor, the Transfiguration; and in Bethlehem, Christmas.

It’s unforgettable to celebrate Christmas in May, June and September and Easter in December, January and February. It’s more memorable to enter into those mysteries of faith on consecutive days. Most indelible of all is to mark those events in the sacred spots where they occurred.

In the Holy Land our lectio divina easily becomes a visio divina, a visual meditation that forever impacts how we contemplate the mysteries we mark.

I’ve been thinking about the visio divina of Bethlehem a lot lately, as throughout Advent I have been preparing myself and those I serve for Christmas.

One of the perpetual challenges for pastors is to help people focus in December not on tinsel-decorated pine trees, colorful wrapping paper, candy canes, jingle bells, ugly sweaters, reindeer, sleighs and the North Pole, but, rather, on the City of David, on Jesus, Mary and Joseph.

That task is easier this year because of the pandemic, as far fewer of us are going to malls and box stores, attending scores of Christmas parties, or even traveling. With so much of what Dickens in A Christmas Carol called the “hustle, bustle, push and muscle, rushing to and fro” on COVID hiatus, there’s an opportunity for people to focus on the essential.

On the other hand, there’s something that makes this year more challenging: Because many will celebrate Christmas without the friends, family, fellow parishioners and sacred activities, like Mass in person and Christmas pageants, that can assist them not to forget the deepest reason and reality of the season — Jesus and what he wishes to do in us — there will be a temptation to focus on what we don’t have and miss, rather than Who we do have.

That’s why to have a truly merry Christmas this year, prayer — especially the visio divina I described above — is particularly important. For those who have had the privilege to go to Bethlehem in person, it’s an opportunity to revivify those memories and dust off albums. For those who haven’t, we live in the age of Google and YouTube, and there are plenty of opportunities for virtual pilgrimages.

There’s also the tried-and-true, 997-year-old solution of St. Francis: to spend lots of time pondering Christ in the crèche or presepio, as he helped the residents of Greccio do with a living Nativity in 1223.

Pilgrimages to Bethlehem really feature two locations, both of which can inform our visio divina.

The first is the Shepherds’ Cave in Beit Sahour, in the fields to the east of Bethlehem proper. There’s no biblical geospatial coordinates to know exactly where the shepherds to whom the angels appeared on Christmas night were located, but since the fourth century, Christians have believed that the caves found in the fields of Beit Sahour were the best candidates. The Franciscan Custody of the Holy Land has built a church there and converted two caves into chapels. It’s always moving for me to celebrate Mass in those caves, singing Christmas hymns in the limestone echo chamber and bringing to the altar under sacramental form the One whom the shepherds adored in swaddling clothes.

The shepherds reveal to us four essential lessons we need to live Christmas well.

The first is vigilance. They were on watch. They heard the message proclaimed by the angels because they were awake in a state of Advent waiting. They were ready for what God would reveal through the angel.

Second, they were prompt in responding to God’s messengers. As soon as the angelic choirs had departed, they said, “Let us go, then, to Bethlehem to see this thing that has taken place that the Lord has made known to us,” and “they went in haste.” They didn’t wait until the morning or take time to check their calendars. They went immediately.

Pope Benedict asked in his book on the infancy narratives in his Jesus of Nazareth trilogy, “How many Christians make haste today where the things of God are concerned?” In his 2012 Christmas midnight Mass homily, he added, “God does not feature among the things that require haste. The things of God can wait, we think and we say. And yet he is the most important thing, ultimately the one truly important thing.” The shepherds show us how to prioritize God.

Third, they teach us that to encounter the Lord as he wants, we have to move. By God’s design, the Holy Family could have been directed to the cave where the shepherds were dwelling so that the shepherds didn’t have to move. Yet even though the eternal Son of God traveled the distance from heaven to earth to be with them, he was born a short distance away, so that the shepherds would have to get up and journey. Likewise, Bethlehem is not going to come to us on our La-Z-Boy. We need to be willing to make a pilgrimage, to overcome spiritual inertia, to go beyond our comfort zones.

Lastly, the shepherds show us how the encounter with Christ is meant to change us. St. Luke tells us that, after the shepherds adored Jesus, they returned, “glorifying and praise God for all they had heard and seen.” They became evangelizers, like new angels, taking the good news of great joy that the angels had announced to them, and the means of peace on earth, out to others. That’s what the Lord hopes Christmas will do for us.

The second great site in Bethlehem is the Basilica of the Nativity, built by St. Helen in the 330s, rebuilt by Justinian in the sixth century and fortified by the Crusaders in the 12th century.

It was constructed over the cave where the early Christians preserved the living memory of Jesus’ birth and rest in the manger. Beyond the priceless ancient mosaics and candles everywhere, one spot sticks out: the subterranean Grotto of the Nativity, where there is a much-kissed 14-point star — for the three cycles of 14 generations in St. Matthew’s genealogy — underneath an altar with the inscription, Hic De Virgine Maria Jesus Christus Natus Est (Here of the Virgin Mary Jesus Christ was born). Whether the star indicates the precise location of the virgin birth or it’s inches or yards away matters less than the historicity of the infant God-man in that cave. Christianity is not a philosophy or a set of ethical teachings, but a friendship with someone born at a particular time in a particular place who has called us to follow him and make salvation history.

Jesus was born there for a purpose that profoundly implicates us. We were created by God for that purpose.

It’s to that location that the Magi came, laying themselves down with their gifts in homage and returning “by a different route,” changed forever. It’s there that God gave the “sign” of an “infant wrapped in swaddling clothes and lying in a manger,” to communicate that we should never be intimidated to approach him, since even criminals are unafraid to approach a little baby. It’s there that the Holy Family seeks to welcome us, much like Mary and Joseph welcomed the Magi and the shepherds.

This year let’s go to Bethlehem with greater intentionality, and stay there longer, in rapt and grateful visio divina.

The Morality of the COVID-19 Vacci...