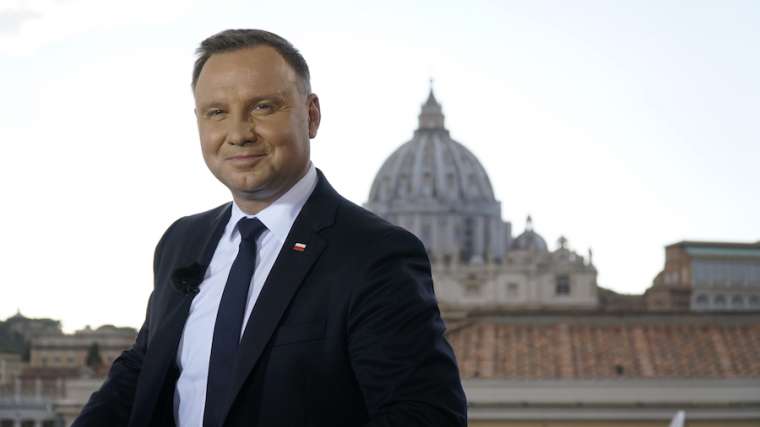 On Sept. 25, EWTN News spoke with Poland’s President Andrzej Duda, who met with Pope Francis during a visit to Rome.

Duda spoke about his own Catholic faith, Pope St. John Paul II, secularization, and his efforts to promote the family.

Below is the full text of that interview:

President Duda, you grew up in the south of Poland in a Catholic family. How was your life of faith in the family, how did you live the Catholic faith and how have you brought that to your presidency? Has it been a challenge?

Indeed I was raised in a family that has always been Catholic, for generations. That’s the type of family I grew up in. This connection to the Church, to the Catholic Christian community, was always a fact, from the beginning of my life. And it always was very important in my home for my parents and grandparents. As a child I was an altar boy. I served Mass at church in Krakow and in Stary Sacz, where my father was born, where my grandparents used to live at that time. I simply grew up in this atmosphere. This was always important. And you could easily say that I was absorbing these values.

Tell me about your specific devotion to St. Bobola and to other saints in Poland.

So, there is this special attachment and later I grew up in this particularly patriotic atmosphere. I was active in boy scouts, who were very patriotic. St. Andrew Bobola was a man who died not just for the faith. Not only was he violently murdered by Cossacks because he was a Catholic clergyman but he also died for Poland and Polish ideals, so you could say that he was a believer, a priest and a patriot.

You’re also from Krakow. John Paul II was there for many years. What was your relationship with John Paul II?

We call this generation of ours, the generation of kids who were born in the 70s and the beginning of the 80s and also those born in the 60s, “the JPII generation”… John Paul the Second. We grew up with the pilgrimages of the Holy Father. And Krakow was the place that the Holy Father, during the history of his pontificate visited most often. It was, after all, his city. He was the metropolitan of Krakow and the cardinal of Krakow before he became pope. He especially loved to meet the youth in Krakow.

He always had time for the youth and we as children were brought by our parents to meetings with him and then as young people we went by ourselves underneath the famous papal window on Franciszkanska Street and to the fields of Krakow where he said the Holy Masses, attended by millions of people. And this was always incredible. And the Holy Father did the greatest thing you could do for the Poles at that time, namely, he showed to my parents’ generation how many people in Poland think alike.

During the dark time of communism, in 1979, he came on a pilgrimage to Poland and people gathered and saw that there were millions of them. And that millions of these people are of the faith and they think alike. They were listening to him at that time. And it was the beginning of the changes in Poland.

After that, in 1980, Solidarnosc was created. This year we are celebrating the 40th anniversary of Solidarnosc. And that was the beginning of the end of communism. Despite the imposition of martial law, all of this could not be stopped. The Holy Father was here [in Rome] and was vigilant all the time. And that’s how we have freedom, because of him. There’s no doubt about it.

You’ve made defending and promoting the traditional family a big part of your platform in Poland. You spoke about it with the pope today. You took part in a march for the family back in Poland earlier this week. If we look at your policies, you’re constantly defending the family and this is in the face of the European Union which often speaks poorly of Poland for defending this values, speaking in other terms, asking for you to take on abortion rights or defend same sex marriage, or other things like this. What do you think the European Union is asking of you, personally and as a president, and what is Poland’s response?

You are touching on a very important issue.

The family in my presidency and in my life has an immense value and in my view of the state, every state, but first of all obviously the Polish State. What is there to say but that there is no nation, no State without a family that has children, which in turn causes the renewal of generations, which means that the nation remains and it can create a State. So, if someone thinks of himself as a Polish patriot, if someone thinks that Poland should remain, that our nation should exist, then there should be no doubt that the family in all of this has a fundamental meaning. That’s how I approach this.

I try to proclaim these views not just in Poland, and build this legal and systemic framework so that the family can grow best, have the most children, be supported by the Polish state, just as the Polish Constitution stipulates.

The Polish Constitution orders the State to particularly defend the family.

And this is, in my opinion, the most deeply correct approach.

And I think this is abused by various sorts of performers who are inimical to Christianity and Catholicism. And you gave an example of that. He knows that he can afford to do that because Catholics, Christians will not hurt him in any way because of that. And so he has this cheap courage.

The birthrate in Poland is rising after some efforts that you’ve made, but only slightly and it’s still not at the point where it will replace itself, the population of Poland. You also are promoting family, education, you spoke about that with the Pope today as well. What’s the long game in Poland for defending Poland against the secularization that’s happening across Europe and how are you going to carry that out?

I told the Holy Father today that I believe that at this time when from all sides we are being pushed by this anti-Catholic, anti-Christian propaganda – some would say liberal leftist [propaganda], where there is this very strong pressure to imbue other values, especially into the young people, completely opposite to the values that we read about in the Sacred Scriptures, the Bible – it is simply our duty as people of faith to pronounce our values steadfastly, constantly and unceasingly and try with all our strength to stem these other currents which in my conviction destroy the traditional family, destroy the human being as it is best understood. They disrupt traditional upbringing. I think we should [pronounce our values] despite everything, do our duty, and that’s what I do.

How are you working with other neighboring countries to defend Christianity, also in places where it is persecuted?

Many times, also in the European parliament, I participated in passing various acts of declarative character but also legislative ones pertaining to the defense of Christians, especially in the Middle East where they are in danger or in Asia, southeast Asia, there are many such places where people are being persecuted for their religious beliefs, but Poland right now, as it is governed by the United Right [coalition], while I am president we really pay close attention to that.

We are now a member of the Human Rights Council. We pay attention to these issues. We were the non-permanent member of the security council of the UN. And, a year ago, we passed a resolution pertaining to those who are being persecuted for their religious beliefs. We stress this problem because we believe we have to talk about it.

President Duda also offered a message to the viewers of EWTN Polska:

Heartfelt greetings to all the viewers of EWTN Poland. Thank you for watching Catholic television. I think that this TV station carries the values that are important for us. Here in this place, our Holy Father John Paul II served God, the Church and Poland. This year we celebrate the 100th anniversary of his birth. I would like you to sometimes take in your hand the sermons the Holy Father gave us, his words he spoke to us. I would like you to sometimes look on the Internet and on YouTube or some other channels find the words spoken by the Holy Father, because it is important to remind ourselves of them in order to know what path we Poles, we people of faith, we Catholics, should follow through life. I very cordially invite you to do that. Thank you for your attention, thank you for listening. All the best, everybody.